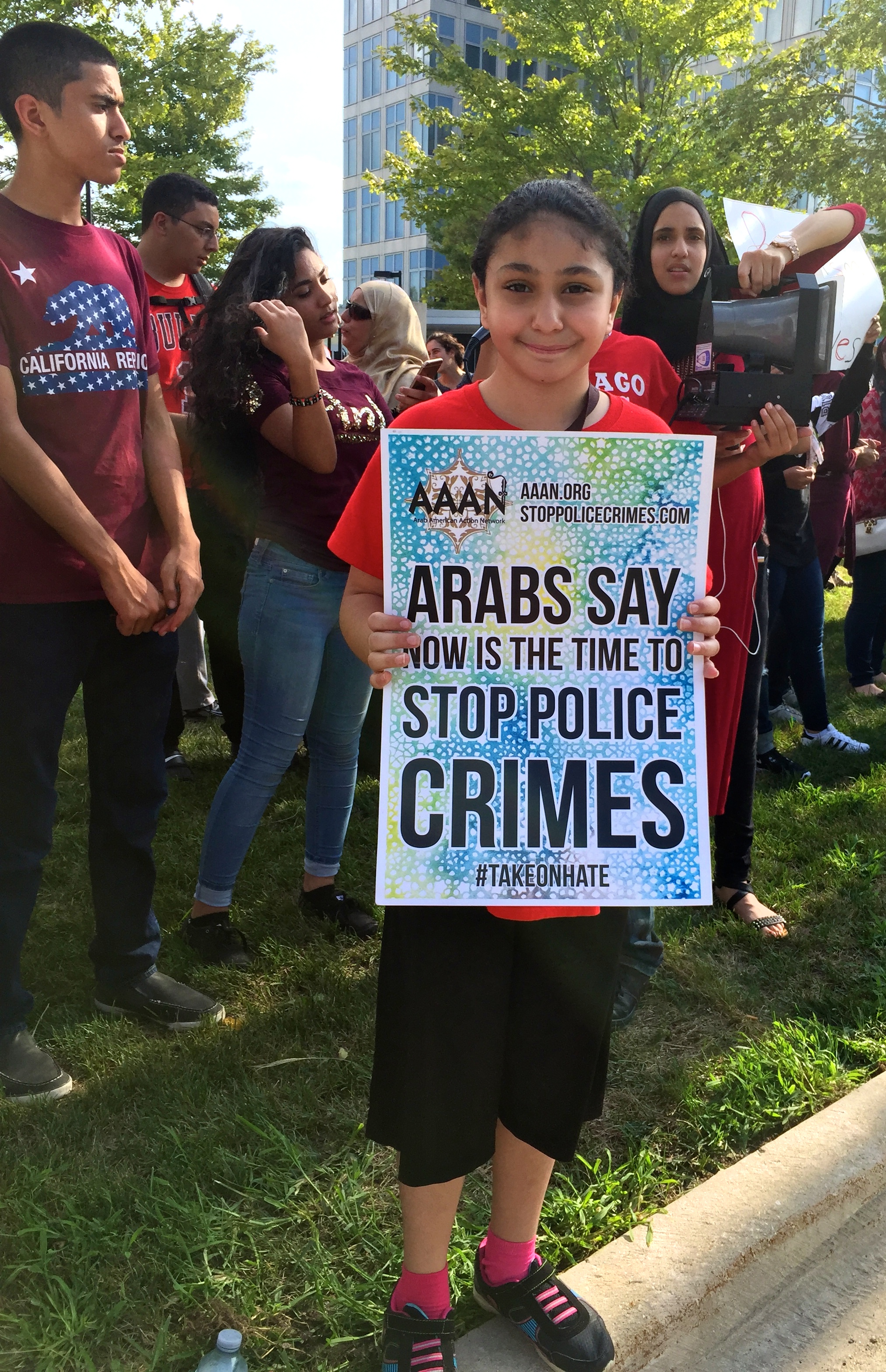 With 50 supporters from multiple activist groups, members of the Arab American Action Network’s (AAAN’s) Youth Organizing Program delivered a letter to Michael J. Anderson, Special Agent in Charge of the Chicago Division of the FBI, and held a press conference, on Thursday outside the gates of the FBI Headquarters on Roosevelt Road.

The letter demands an end to the FBI Chicago Division’s policies of racial profiling, including the use of Suspicious Activity Reports (SARs) and undercover informants, and the unveiling of the Countering Violent Extremism (CVE) program. This was the latest action in the AAAN’s four year Campaign to End Racial Profiling against Arab and Muslim communities in Chicagoland.

“Every minority in America is treated like a problem long before they are treated like a person,” began a member of the Arab American Action Network’s (AAAN’s) Youth Organizing Program at the community launch of the campaign in August of 2015.

During the summer of 2012, a small group of youth at the AAAN was determined to begin a community-based campaign to put an end to racial, national, and religious profiling by law enforcement, which saw a sharp increase subsequent to the events of 9/11. The youth of the campaign conducted surveys, data analysis, and extensive research, and built alliances across racial lines with other organizations, communities, and youth to further their ultimate goal of equality and justice for all.

The group held a their first protest in 2013 outside of the Chicago headquarters of Immigration and Customs Enforcement (ICE).  The AAAN youth publicly and officially launched the campaign at the community town hall meeting in 2015 that attracted 175 people. At that meeting the AAAN Youth were joined by a guest panel discussion including Veronica Morris Moore from Fearless Leading by the Youth (FLY) and Idalia Cervantes from the Illinois Coalition for Immigrant and Refugee Rights (ICIRR). At that time, the surveys had been returned and initial analysis of the data had begun.

Between August of last year and Thursday’s delivery of the letter to FBI Headquarters, the AAAN Youth had completed multiple FOIA requests to gather additional information on SARs and the Countering Violent Extremism (CVE) program had been introduced by the Obama Administration in December of 2015.

The demands contained in the letter are based on the results of the community survey of over 450 Arab and Muslim residents within Chicagoland, which detailed their experiences with different levels of law enforcement.

The survey found that 1 out of 10 community members who responded had been visited by the FBI, and 85% of those visited had been asked questions about their religion, national origin, political beliefs, or immigration status. These and other statistics from the survey results suggest  a FBI policy of singling out Arabs and Muslims for hyper-scrutiny, through policies and programs like SARs and CVE.

“We have known our whole lives that the FBI especially harasses our people and community,” said Sobhiya Salem, a leading youth organizer with the AAAN, “but now we have data from our survey and other research that will strengthen our demand that this racial profiling end immediately.”

The letter, reproduced below, written by members of the AAAN’s youth organizing program and signed by a number of allied organizations (American Friends Service Committee, Chicago Alliance Against Racist and Political Repression, Assata’s Daughters, Korean American Resource and Cultural Center, Chicago Desi Youth Rising, and others), was hand delivered to the guard at the gate of the fortress-like FBI building. The protesters were told that the letter would be given to Anderson, but they were not allowed into the building.

The press conference held on the sidewalk just outside of the gate included AAAN youth leaders and members of the Chicago Alliance Against Racist and Political Repression CAARPR), the Bluest Lie Collaborative, and others. After the delivery of the letter, AAAN youth leader Razan Khalil began the press conference with a statement from the AAAN Youth.

“For the past four years, the AAAN Youth Program have led the campaign against racial profiling and been fighting to put an end to police killings, SARs, informants, and CVE within our communities. SARs are used to target specific people that law enforcement considers suspicious. SARs cover innocent acts such as walking into a building and asking about their office hours, buying binoculars, or taking pictures of a train station…Since the FBI decides what is suspicious, it can lead to abuse of authority.”

Razan Khalil continued – “In the current climate it will lead to the targeting of Arabs and Muslims…Countering Violent Extremism is a new program the FBI is unveiling. This program also targets our communities. Why is our community being targeted while there are violent white nationalists shooting up churches in South Carolina, KKK violence and in Chicago police killings of Paul O’Neil, Rekia Boyd, Laquan McDonald as well as torture at the Homan Square black site? With all these examples of terrorism carried out by police and white nationalists – why doesn’t the FBI focus on that?”

Hoda Katebi, Communications Coordinator from CAIR-Chicago, connected the Youth Campaign against Racial Profiling to the wave of Islamophobia in the country.

“We are at a time of heightened Islamophobia. The time when the amount of clothing a woman chooses to wear is somehow correlated to her level of oppression. Muslims can be kicked off of airlines for doing math. Muslims can be killed in Queens NY for leaving a mosque. It’s the same climate that renders our safety irrelevant. No we are the security threat. Isn’t it strange that law enforcement and media outlets can’t quite figure out how Muslims can be shot execution style, but in 24 hours are able to identify the intentions, motives, and family history of anyone who commits a crime with a Middle Eastern sounding name.”

Katebi describes how the targeting of Muslim communities is just part of a system that negatively impacts countries in the Middle East, refugees, as well as Muslims here in Chicago.

“Of course they are all part of a larger political system whose imperialist and colonialist projects in the Middle East have created a refugee crisis that they won’t take responsibility for. Whose prisons and “security measures” hold and torture our Palestinian siblings in jails and cages. Whose militarized police force in the US shoot Black children sixteen times and whose hyper-surveillance of Muslim communities have not only correlated to increased physical and mental health problems among our youth, but has created a situation where its possible that a young Muslim woman Itemid Al-Matar can be tackled by several Chicago Police officers, unprovoked, publicly strip-searched, simply for trying to catch the Red Line [subway] to go home. CAIR-Chicago proudly calls for an end to SARs, CVE, and all forms of discrimination.”

Parish Brown from The Bluest Lie Collaborative expressed the group’s opposition to the Blue Lives Matter ordinance that is up for consideration in the Public Safety Committee of Chicago’s City Council. (The proposed ordinance would categorize offenses committed against police officers, firefighters and emergency medical technicians as hate crimes. Fines would increase from a range of $25-$500 to $500-$2,500, and allow jail terms of up to six months.)

“The Bluest Lie Collaborative. We are a small rapid response team of young Black organizers whose mission is to kill the Blue Lives Matter hate crime expansion ordinance sponsored by notorious 14th Ward Alderman Ed Burke…In line with the nation-wide wave of reactionary legislation, we understand the emerging Blue Lives Matter trend as a cynical historic power grab to silence, to criminalize, to intimidate organizers, protestors and everyday citizens who CPD and public servants are supposed to protect.”

Brown went on to challenge even the justification for the Blue Lives Matter ordinance itself.

“CPD cannot be trusted to investigate hate incidents. They are already privileged under the law. No legal path exists to charge an on duty police officer with a hate crime. Law enforcement and Department of Justice data tells us there is no crisis of hate crimes on police…Violence against police is at an all time low. Deaths by police violence are at an all time high. Don’t buy the bluest lie. Please sign our petition so we can stop these attacks on our communities and work for liberation.”

Adrian Harris from CAARPR described the solution required to end police crimes against those in the Arab, Muslim, Black, Latino and other communities impacted by racial profiling by the Chicago Police, i.e. community control of the police. (An ordinance for a Civilian Police Accountability Council (CPAC) has been introduced into the Chicago City Council.)

“We see the many ways our city fails to respond to reported misconduct stemming from their departments. A resolution should arise from our very own individual communities. Moving forward we must find methods of coming together with our neighbors, aldermen, city officials in demanding an all Civilian Police Accountability Council (CPAC), elected within the communities that will at last have the people power to legally say we are not here to be messed over. The minority population of this district, this Grand Republic will not be profiled again. We are unable to remain your humble, docile and ignorant populace, while being aware that our hometown is slipping further and further into a police state. The CPAC ordinance will be passed and your department will have to find other avenues for your tyrannical behavior.”

Primer on the Racial Profiling Campaign

Protecting Yourself from Entrapment

The AAAN Youth leaders said that if they don’t hear back from Special Agent Michael Anderson, they plan on continuing to protest and demand the end of the use of SARs by the FBI Chicago Division, and that the Chicago office refuse to be part of any Countering Violent Extremism (CVE) programming.

The complete letter and organization endorsements.

To Michael J. Anderson, Special Agent in Charge of the Chicago Division of the FBI:
We, the undersigned, are demanding an end to the FBI Chicago Division’s policies of racial profiling. These include Suspicious Activity Reports (SARs), the Countering Violent Extremism (CVE) national program, and the use of undercover informants targeting our communities. These tactics and policies have a detrimental effect on our families. In fact, according to an Arab American Action Network (AAAN) survey of Chicagoland Arabs and Muslims:
The rampant use of informants and the hyper-surveillance of people in our communities have led to the following results:
We also recognize at the time of writing this letter that the Movement for Black Lives in this country and city is at its peak. The hyper-surveillance of Arab and Muslim communities by the FBI cannot be separated from mass policing, mass incarceration, and killing of Black people by the Chicago Police Department and law enforcement agencies across the country.
We write this letter officially calling for you to publicly declare the end of the use of SARs by the FBI Chicago Division, and that your office will refuse to partake in any CVE programming.
Signed:
The Youth Organizing Program of the Arab American Action Network
American Friends Service Committee-Chicago
Assata’s Daughters
The Bluest Lie Collaborative
Chicago Alliance Against Racism and Political Repression
Chicago Desi Youth Rising
Council on American Islamic Relations (CAIR)-Chicago
Korean American Resource & Cultural Center
Students for Justice in Palestine (SJP)-De Paul University
SJP-Northwestern University.