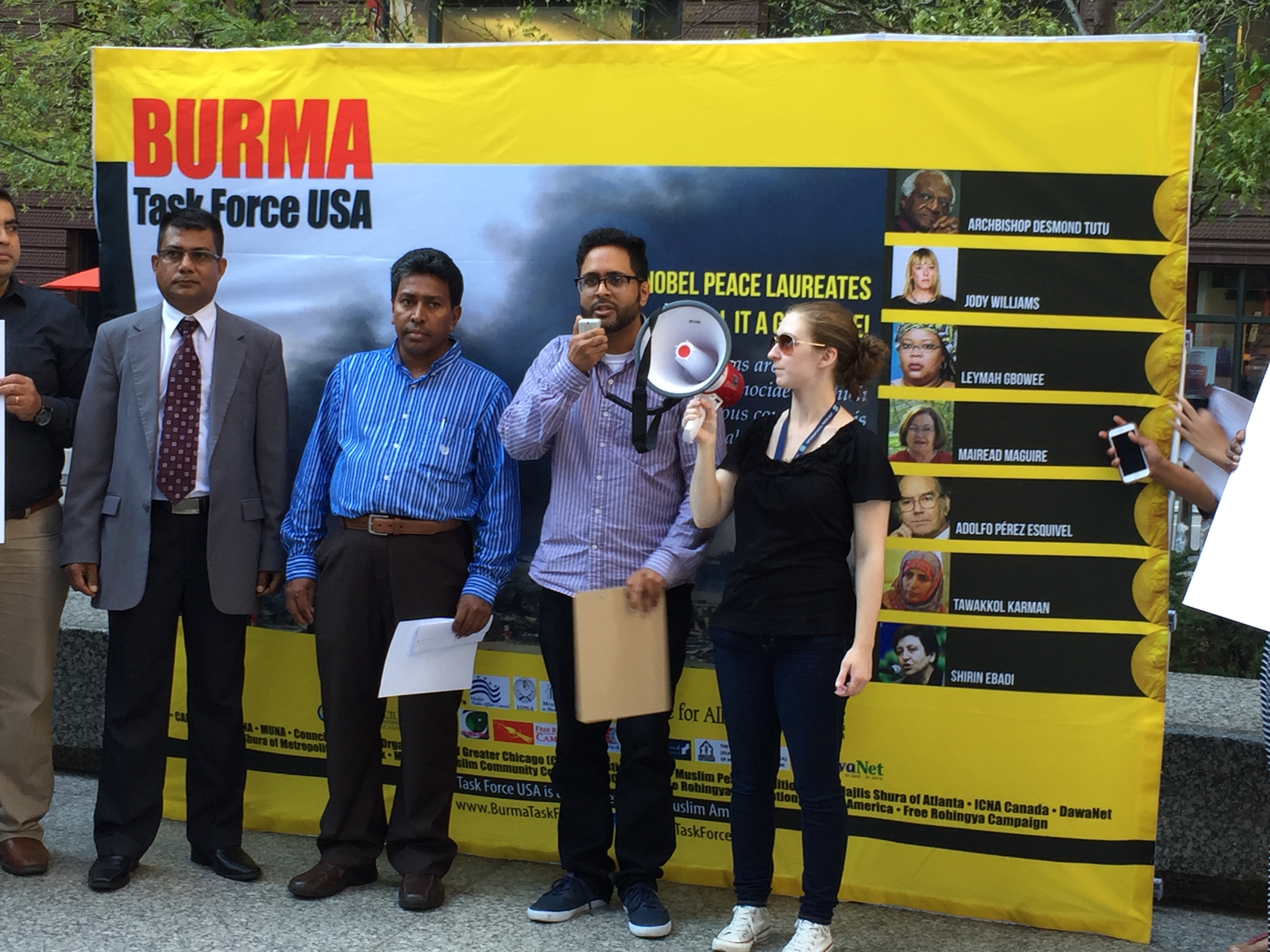 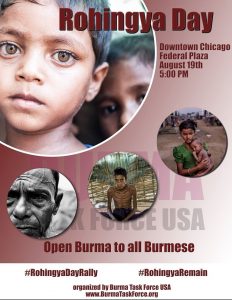 On Friday, Chicagoans rallied in Federal Plaza for the first World Rohingya Day to bring attention to the Rohingya Muslim minority of Burma who have been targeted by a government and Buddhist extremist campaign of denying that they exist and do not deserve citizenship. In the words of Professor Azeem Ibrahim who has recently completed research on the Rohingya “It’s a slow motion genocide.”

World Rohingya Day is held in conjunction with World Humanitarian Day, August 19. In Chicago, the rally was sponsored by the Burma Task Force USA and included Rohingya refugees and their allies who have been actively fighting to restore the human rights of the Rohingya. There was also a rally held at the UN and march to the Burmese Consulate in New York City; a demonstration in Los Angeles; as well as protests in Washington DC at the Burmese Consulate; in Mississauga, Ontario and the UK.

The Rohingya Muslims, an indigenous minority in Burma has faced discrimination in their homeland for over 60 years. The past several decades have seen an escalated level of persecution. Eight Nobel Prize laureates, Yale University, the London School of Economics and Queen Mary Universities’ Law Schools have termed the treatment of the Rohingya “genocide.” Yet there is very little reporting on the Rohingya humanitarian crisis, especially in the US media. This is a case where an entire people is being denied their basic rights within the country where they were born and are actively being exterminated, but there is still little outrage. Even the attendance at the Chicago rally was very low.

State-led genocide has resulted in massive internal displacement, the creation of concentration camps and thousands of Rohingya fleeing by land and sea, often at the mercy of violent, criminal human traffickers. The Rohingya seek refuge in local nations where they have little rights and still face abuse as a vulnerable minority.

There were multiple speakers at the rally in Chicago addressing different aspects of the plight of the Rohingya. Muhammad Tauseef Akbar from the Burma Task Force USA led the rally. “We’ve chosen this date because the Rohingya cause is one of the most undeservedly unnoticed causes that exists today and the most urgent. You will hear from our speakers why it is so urgent as people lose their lives. We have something to do with that being in America. We have a tremendous opportunity to affect change as we open up relations with the nation of Burma.”

“We honor on this day those who have lost their lives in the humanitarian services and also those who are continuing to bring peace, assistance and relief to the millions of vulnerable people around the world including the Rohingya…They are one of the indigenous people of Burma from the 7th Century. They are bonified citizens of Burma from the 1947 constitution….They are a scapegoat right now, The Burmese military have made them stateless and at a subhuman level since 1962…When Aung San Suu Kyi came to power, she did not include Rohingya people and other Muslims into her national building process.”

Professor Azeem Ibrahim from the Rothermere American Institute at the University of Oxford and author of the recent study The Rohingyas: Inside Myanmar’s Hidden Genocide described some of the reasons the Rohingya became scapegoats in their own country.

“The real tipping point came in 1962 when the military dictator Ne Win enacted a ‘Burmese Road to Socialism Program’ which was an economic disaster. So he did what all dictators do, blame somebody else. They blamed the ‘outsiders,’ the ‘enemy within’ and the Rohingya were the minority of choice for this blame. He changed the constitution so you could only be Burmese if you were a Buddhist. He financed extreme Buddhist organizations and monks and monasteries that were persecuting the Rohingya on a mass scale. You may be thinking, aren’t Buddhists peace-loving people? But these are not the same kind of Buddhists…They are not the Dali Lama Buddhists…They believe in order for Buddhists to be protected they must suppress all other ideologies and keep other ethnic groups in check. This was followed in 1974 by the Emergency Immigration Act when all Rohingya were declared no known citizens and again with the 1982 Citizenship Act when they were all stripped of their citizenship.”

Professor Ibrahim, based on his research for his book, also refutes the main accusation against the Rohingya that they are not from Burma but from Bangladesh.

“I dug up documents from the Indian National Archive back to 1799 and I found documents by British civil servants that actually named the Rohingya. These accusations that the Rohingya are not from this land and are foreigners from Bangladesh are patently false.”

Asayo Horibe, President of the Buddhist Council of Midwest said “Upon hearing about the plight of the Rohingya, initially I said how can that be. That is not how the Buddha taught us to live in this world. We honor life and are here to live among all people. The Rohingya have been in Burma a very very long time. The Buddha taught that we honor life, all life. I cannot understand why Buddhists should behave in such a way toward another ethnic group.”

Jennifer Sawicz, Christian activist said “I truly believe according to my faith we are called to walk with the oppressed, give voice to the voiceless. If someone asks for your help, you must never deny it. The Rohingya are some of the most oppressed and voiceless people. They have an unfailing commitment to peace.”

The Chicago World Rohingya Day was organized by The Burma Task Force USA that has worked to create domestic and international pressure to improve the treatment of Rohingya by the Burmese government. Their efforts have made some difference in stopping attacks and pressuring the Burmese government, but have had little effect on the US government exerting pressure on Burma to end their human rights abuses. One likely reason for this is the relatively recent transition of the Burmese government from being run by the military to transitioning to a “democracy” led by Nobel Peace Prize winner Aung San Suu Kyi.

The US State Department seems reluctant to criticize the Aung San Suu Kyi lead government even though Aung San Suu Kyi herself has made statements that encourage discrimination against the Rohingya and has done nothing to stop Buddhist extremists from persecuting the Rohingya. In May of this year, she advised the United States ambassador against using the term “Rohingya.” Her government, like the previous military-led one, will not call the Rohingya people by that name because it does not recognize them as citizens, said her spokesman, U Kyaw Zay Ya, a Foreign Ministry official.

In April, the same US ambassador-designate Scot Marciel visited monk Sitagu Sayadaw. The purpose of the visit was “to pay his respects ahead of the Thingyan holiday.” We are told that Marciel “very much enjoyed speaking to the Sayadaw about the diversity of faiths in Myanmar and this country’s rich cultural history.” As Muhammad Tauseef Akbar reports, “However, the benign and benevolent image projected by Sitagu conceals a racist and anti-democratic core that is barely hidden under the surface of his flowery, kumbaya rhetoric. Sitagu is a dyed-in-the-wool Buddhist nationalist. The Myanmar Times reports that he is “a senior member” of the extremist MaBaTha, holding the position of “vice-chair” in the organization.” The MaBaTha are the main Buddhist extremist organization that has fought to deny the Rohingya citizenship and has run a hate campaign against the Rohingya for many years. The Burma Task Force USA is hoping to keep pointing out these contradictions in our foreign policy toward Burma and use it as an opportunity to demand that Aung San Suu Kyi and her government treat the Rohingya with respect as indigenous people of Burma and ensure their human rights.

The Rohingya and their supporters hope new events like World Rohingya Day will help begin to bring the world’s attention to another case of genocide that the international community so far has ignored.

Despite “Democratic” Election Hype, Life For Burmese Muslims Likely To Get Worse