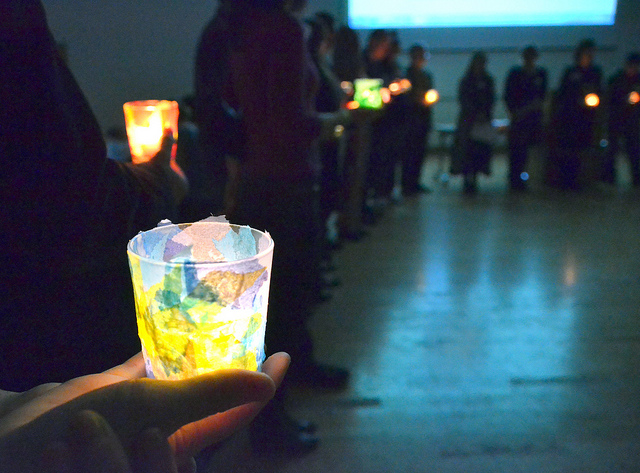 Unlike many others, I would proudly say I loved my high school experience. This might confuse people when they realize that I am Muslim and I went to a Catholic school. But I didn’t just go to any Catholic school, I went to St. Ignatius College Prep, a Jesuit high school nestled in the Sunset District of liberal San Francisco. St. Ignatius, while unapologetically Catholic, is known for its accepting nature, embracing diversity to enrich the community. It is because of Saint Ignatius and how they embraced and encouraged my own faith that I have such a strong belief in Islam. There is a lot of discussion of the importance of inter-faith events to encourage understanding between people of different religions. My experience was the highest form of inter-faith work – a true lived experience.

The Jesuits are a Roman Catholic order of priests who were founded by St. Ignatius of Loyola in 1534. The Jesuits practice their religion through community work and education. My high school’s mission was to educate their students “to become life-long learners who develop their individual talents for the greater glory of God.” This goal is reached through rigorous academics, a strong sense of community and an emphasis on community service driven by a love for social justice and faith. The alumni and students of St. Ignatius “strive to be men and women for and with others, responding courageously to the opportunities and challenges of our time.” These values of community service, dedication to my faith, and a strong emphasis on education resonated with me. After a quick visit and support from my dad, a St. Ignatius alum, I decided to continue my academic career at St. Ignatius. 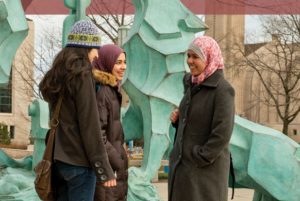 Walking into Saint Ignatius, I expected to ignore the faith aspect of St. Ignatius while I attended. I did not have any interest in organized religion and if anything, it scared me because I was not an active participant at my own mosque. I was not used to prayer in a community. My mom who is Muslim, keeps a Muslim household where we don’t eat pork or keep alcohol and my brother and I were raised Muslim. My dad on the other hand is Catholic. My parents raised my brother and I with the values they held and we attended online Saturday Muslim school until 9th grade but my relationship with God had been purely personal up until that point. The closest connection I had to a mosque was visiting my cousins in Chicago for Ramadan where we attended prayers with them. The first part of orientation was a Catholic mass, something I had never experienced before. The entire mass was uncomfortable as I sat next to my parents, but I tried to open myself up because I understood that school-wide masses would be a part of my education now. Thinking back to that first mass, I laugh and wish I could tell myself to relax. Little did I know that as a senior, I would be welcomed for my own faith and participate in putting on the masses.

While one might think that religion classes would be stifling for me, I found them to be just the opposite. My faith classes were more of a discussion of the Catholic faith than a strict teaching of it. We read passages from the Bible and were asked to discuss them in cultural context, not memorize them. We learned life lessons and pondered what it meant to be a good person or our most authentic self. My religion classes were very open and welcoming.

Freshman year, we spoke about Jesus’ narrative and his resurrection –  a very powerful image. In addition, we discussed how his life changes how many Catholics look to their faith for strength. Sophomore year was a Bible study class, but instead of memorizing Bible passages, I learned the cultural context and meaning behind these passages. It was enlightening to study about God’s love for his people under a different lens. Again, instead of being drilled about the Catholic doctrine, I was learning more about how Catholics pondered and questioned their faith. We studied in depth the Book of Job and with the guidance of my teacher, Alex Llanera, I understood more about how many people might choose to logically not believe in God but more importantly how many still do because of their strong faith.

During my junior year of high school, I took an Ethics and Morality class. This class was considered a religion class, but covered much more than just religion. It also fulfilled a requirement for a public school standard class as well as a University of California A-G course. We spoke about topics such as euthanasia, abortion, torture and other complex issues that would typically thought of as taboo because of our place in a Catholic school. I was not preached Catholic values in my Ethics class either. As students we were given different topics which we were asked to research and then present to the class. These presentations were supposed to be given without any bias to either opinion. At the end of each presentation, we were led in discussions by the teacher. These classes were not dominated by Catholic opinions and many of my peers had progressive outgoing views that surprised me. My school, influenced by its liberal San Francisco setting, looked at these discussions as a way to honestly question and deal with these issues as though we could make a real impact on the world. Through the discussions, I could see that my classmates were really accepting, allowing me to feel comfortable sharing my views as they related to my faith or when they clashed. The classroom was a safe space where everyone was respected and acknowledged for their opinions. It was during my junior year at Saint Ignatius where I really began to explore who and what God is for me. The faith community at Saint Ignatius supported me through this journey by giving me tools to find my way closer to God while also giving me boundaries – recognizing that I am Muslim and had no interest in converting to Catholicism.

As a Senior, I joined Insignis, the campus ministry club at my school because I wanted to be surrounded by others who had faith. It was important to me that I find a faith community because it would make me strengthen my own relationship with God. While I was in Insignis, I had the opportunity to lead a senior retreat called Kairos. Kairos – God’s time – is a special retreat designed by Catholics for students to explore their faith and dive into their most authentic self. As Jesuits describe the term, one’s most authentic self would be a person living in full honesty with themselves and God. This retreat gave me a deeper insight into not only my own faith, but also my friends’ different religious beliefs.

It was a pivotal experience for me because I learned that education and conversation brings understanding and acceptance. It was the openness, love and appreciation that others gave me and my faith that caused my experience to be so fulfilling. I don’t think that people of other faiths should shy away from attending parochial schools, if anything I think St. Ignatius’ encouragement of leading a life of faith and being surrounded in a faith community pushed me to further my own connection to my own faith. St. Ignatius taught me that the most important aspect of inter-faith work is understanding and openness. It would have been impossible for me to get through St. Ignatius if I had been closed off to their teachings and ideologies. Instead, it was only because I worked together with the Jesuits and teachers at my school was I able to form an understanding and relationship with them which deepened their understanding of Islam and my own beliefs.  A key part of any inter-faith work is this full and deep understanding of each other’s lived faith. But even that is not enough. To allow yourself to be embraced by another faith community and to experience another’s sacred space will bring you to a fuller appreciation and understanding of your own faith community like it did for me.