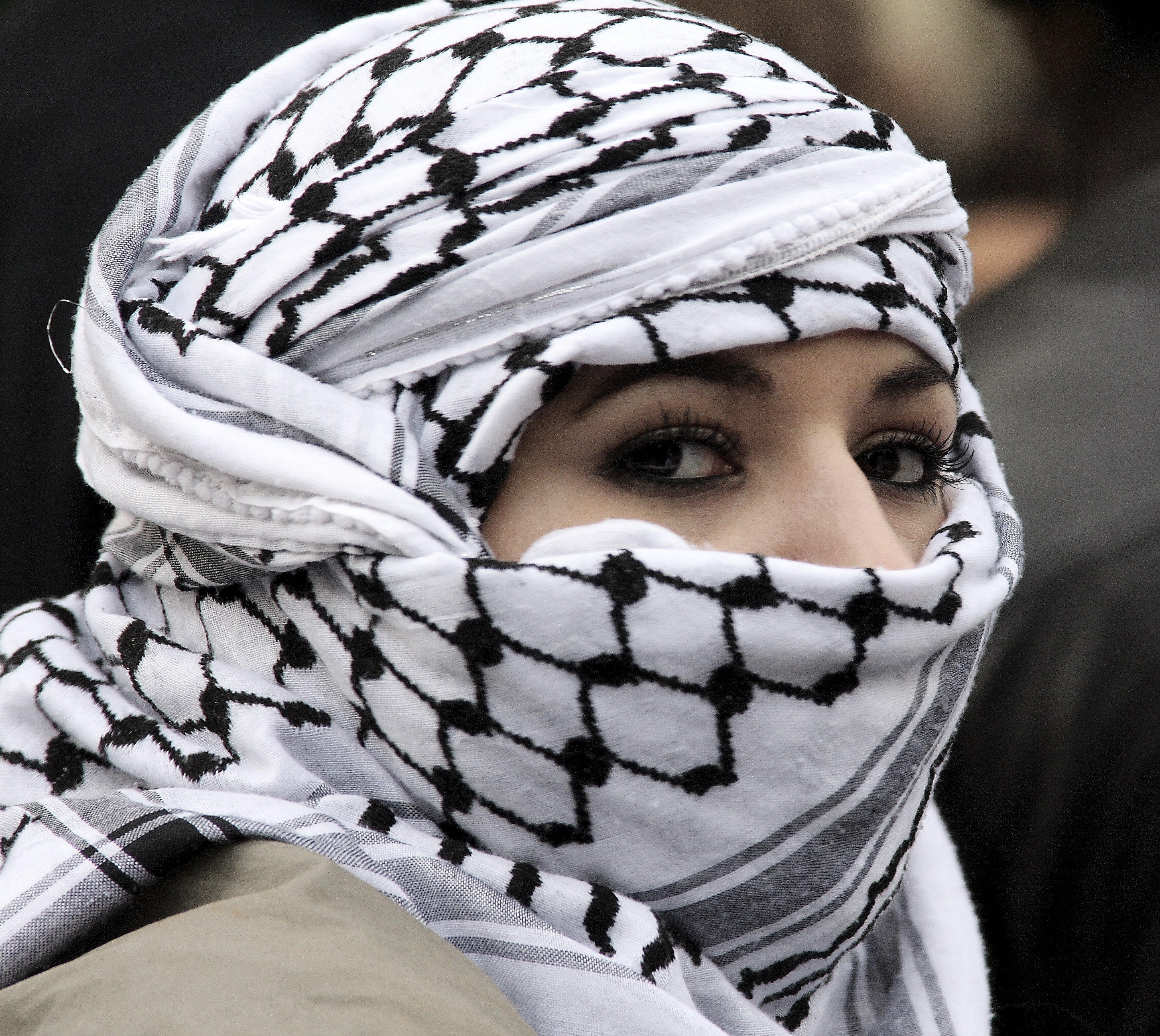 Columbus has been celebrated in the United States of America for many years, but more and more people are coming to understand that he initiated the American Indian’s suffering.

American Indian women were used as sex slaves, and the enslavement of the native population for the purposes of gold mining occurred under Columbus’ supervision. There were American Indians who resisted the mandate of collecting gold for the Spanish, and for their resistance their hands could be hacked off or they would be beheaded.

Unfortunately for the American Indians, the torture didn’t end with Columbus. With the advent of the United States of America, came many more atrocities and tales of oppression for the native people. Such atrocities as the Trail of Tears that was created by the forced relocation of native tribes from the East to the Midwest which would become a precedent for breaking future treaties and sending American Indians to reservations, such as Pine Ridge in South Dakota. 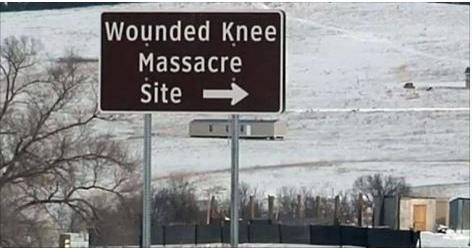 Wounded Knee is a name that has been burned into the collective American Indian memory for the atrocity that had occurred there on the Pine Ridge reservation in 1890. Conservative estimates say that 150 American Indian men, women, and children were shot dead, while other estimates said there were nearly 300 murders; but whichever estimate one concurs with, it is clear that the massacre at Wounded Knee was perhaps the worst shooting in United States history. The 7th U.S. Calvary was attempting to disarm a Native band of their weapons at Wounded Knee. This was the justification the United States government gave for the murders.

If you’re like me, a non-Palestinian in the United States who never paid much attention to the news while growing up, you may not know much about the Palestinians. In a lecture at my university, a guest speaker described the process used by Zionist extremists who intended to dehumanize and make the world forget the Palestinians. Iymen Chehade, a part-time professor at Columbia College, discussed how he had one of his classes cancelled due to his “un-balanced” approach to the Israeli-Palestinian Conflict. Balanced or not, Chehade was correct in that either through direct action or inaction, I knew nothing about Palestine or Palestinians (effectively making me forget about them) until the summer of 2014 with the onset of shelling on the Islamic University of Gaza.

Later I learned of one of the first offenses against the Palestinians. The massacre at Lydda in 1948 was where the newly declared State of Israel attacked one of the Palestinian towns outside their zone of control. When some Palestinians fought back against the Israeli invaders the citizens in the town were rounded up in their houses and the local mosque and murdered with grenades and anti-tank shells.

The tragedy at Lydda, and other similar events, began the Nakba. This is the Palestinian ‘tragedy’ that caused many Palestinians to be ejected from their homes. The Nakba continues in the form of forcing Palestinians from their land and homes to this day. Just like the Palestinians who fought back at Lydda, Palestinians continued to resist during two “Intifadas.” The First Intifada was an uprising against the Israeli rule of the region in 1987.  The Palestinians, having no weapons, fought with stones.

The Second Intifada was a series of events including the Israeli Defense Force (IDF) conducting military offensives, Palestinians being stripped of their civil rights as a punishment for an uprising provoked by Israeli politician Ariel Sharon who led incursions with soldiers into the Al-Aqsa Mosque and Haram al-Sharif after peace talks fell apart at Camp David. The Second Intifada included armed resistance by the Palestinians. Nearly 5,000 Palestinians lost their lives.

The Nakba and the Palestinian designated areas of the Oslo Accords are the American Indian equivalent of the reservation system in the United States. The massacre at Wounded Knee is akin to Lydda. Abuses suffered under Israeli occupation is not far off from the manifest destiny policies of the United States of America. When observing the history between these two peoples one can see that the Palestinians and American Indians have suffered similar indignities, but what about today?

Unfortunately to this day both American Indians and Palestinians are enduring hardships at the hands of the agents of their oppression. One such hardship is the loss of their native lands. 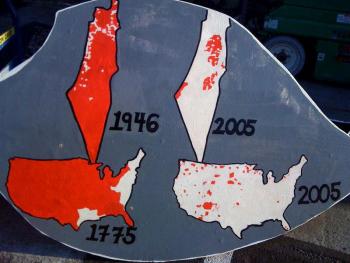 The usurpation of lands is a common bond the two peoples share. The seventh President of the United States, Andrew Jackson, was said to have a goal to move the American Indian Westward. It was this desire to expand the borders of the United States that he had sent a letter to the Creek nation claiming that peace may come with the “red and white children(‘s)” separation. Similar claims are made for the security of Israel when it comes to Palestinians. Security was one of the primary reasons behind the United Nations opposing the West Bank wall. This wall not only came at the cost of separating friends, family, and neighbors, but also at the cost of land since it creeped further into Palestinian lands. Both the American Indians and Palestinians lost their land in the name of security, and because of that had also lost their right to self-determination.

Once the American Indian’s and Palestinian’s self-determination was high-jacked, the oppressing power ghettoized their victims. The American Indians were sent Westward to reservations, while the Palestinians were locked in Gaza, and their movement supervised and restricted in the West Bank.

In these areas of control, there is little in the way of comfort or opportunity. In
Gaza, for example, there is one of the highest population densities of the world at 9,713 people per square mile. This naturally creates an unhealthy situation since there are so many people in a confined space which causes issues with potable water since the water filtration plants in the area are working beyond capacity. Food distribution is of concern since Israel will not allow the people in Gaza to fish or farm within their own ghetto. And jobs are not plentiful with an unemployment rate of 40.7%. Similarly, American Indian reservations such as Pine Ridge have issues with job opportunities as well as prevalent health concerns. There is an 80-90% unemployment rate on the reservation since it is difficult to build businesses on the reservation without Government approval. Some health concerns on the reservation are that the women of Pine Ridge are five times more likely to have cervical cancer than the rest of the women in the United States; the people of Pine Ridge are eight times more likely to have diabetes; eight times more likely to have tuberculosis; and teen suicide is four times the national rate. Then of course there is the issue of the 80% alcoholism rate that is not being addressed.

These issues plaguing the American Indians and the Palestinians stem from their land being occupied and their lack of self-determination. It is with those issues and the direct action of their oppressors that has caused the destruction of American Indian and Palestinian families.

People have said that the family unit is the foundation of society, and it because of this idea it could stand to reason that if one was to dismantle the unit – one could destroy a society. For American Indians, there have been many cases where Native children were taken away and sent to non-American Indian foster homes without any reasonable ability to appeal the decision. This leads to American Indian youth losing their culture and native language since more often than not, the youth are placed with non-American Indian families. This abduction of the children is done in the name of the best interest of the children, but reports have shown that these cases can be initiated and carried out for subjective reasons. In some cases, the child’s displacement is for a legitimate reason. Regardless of the success of the children in these scenarios, they still have a lingering longing for their culture. 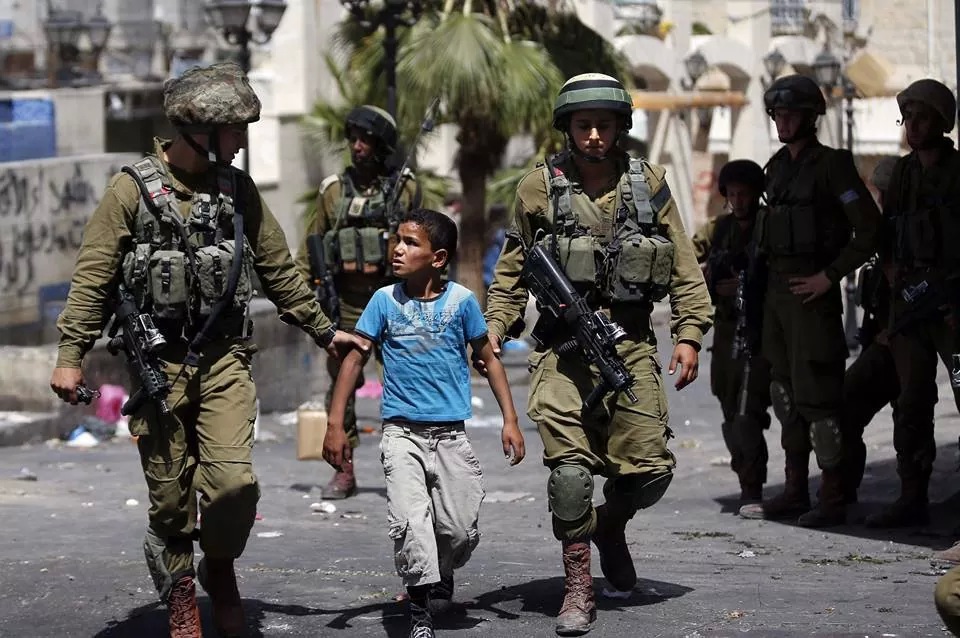 For Palestinians, their families are torn apart in a different way. There are night raids conducted against households in the West Bank that can be the result of guilt by association. What the Israeli security forces do is enter a residence and take the children away for detention. Once in detention they would undergo torture and not be allowed to see their families in order to secure information.  It is said that these methods are employed in the West Bank in order to deter uprisings against settlers in the West Bank. Regardless of the reason, these instances of child detention can break not only the child but also the family with the terrible sense of loss that abductions such as this can bring.

Activism in Support of the American Indians and the Palestinians

There is a great deal of similarity between the past and ongoing issues of the Palestinians and the American Indians. They both have lost their lands to a more powerful entity; they have lost their right to self-determination due to the loss of their sovereignty; and finally their families are being torn apart by the actions of their subjugators.

Even with all these unfortunate commonalities, it seems that the American Indian has been forgotten. This is not to say that the Palestinians and their supporters are in any way less than entitled to support, but rather any supporter of the Palestinians should also show solidarity with American Indians and their supporters to stop the injustices occurring in the United States.

We are all one people: Palestinian, Israeli, American Indian, and American. We are all human beings, and when one of us is brought down we all suffer due to interconnectedness of our world. And since this is our only home, we must do what is right and just to keep it peaceful and in harmony. When we fight over land, give in to fear, take away someone’s child, or deny them basic human rights, we destroy that necessary peace and harmony.

Note from the Author

I would like to dedicate this article to the very man that inspired me to write it, Russell Means. I watched one of his many YouTube talks when he explained the commonalities of the issues between Palestinians and American Indians. He passed away in 2012, but he lives on in the hearts of his loved ones and in the wisdom he shared in his videos.