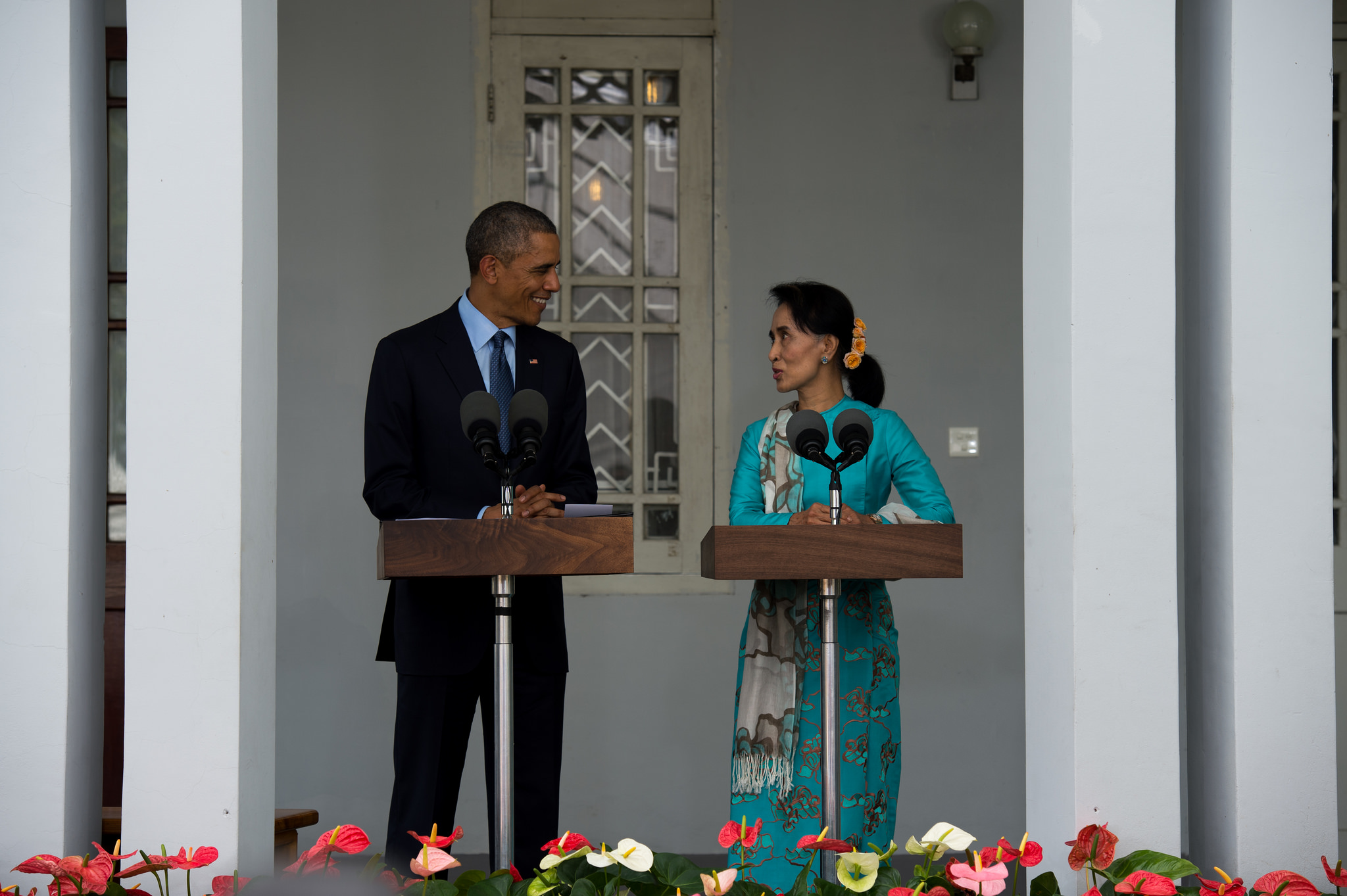 Aung San Suu Kyi, Nobel Peace Prize laureate and icon of democracy in Burma encounters condemnation in the US from human rights groups and activists everywhere she goes. The reason for this is simple: the image of her as a pure ‘champion of the people’ only lingers in the minds of those who know little about Suu Kyi, “the politician.”

Suu Kyi, during the long years of struggle to attain power lobbied the US to place increasingly restrictive sanctions on Burma for rights violations and the suppression of democracy by Burma’s military dictators. As the leader of the civilian government she has just successfully gotten President Barack Obama to remove all remaining sanctions on Burma. The US was the only nation that still had conditional sanctions in place, now the whole world is doing business with a nation presiding over a slow-burning genocide against the Rohingya that has seen “21st century concentration camps” proliferate. It also seems that 100  Burmese tied to the genocidal military regime will be taken off the SDN list (Specially Designated Nationals that cannot conduct business with the US).

The Rohingya face genocide as a number of studies and international experts have concluded, yet they are also essentially being treated as ‘collateral damage,’ that ugly euphemism employed by militaries when they actually mean innocent civilians they have victimized. To be collateral damage implies that according to the state’s calculus, you are an acceptable, inevitable casualty in pursuit of the state’s higher interests. In this instance the higher interest is economic: the US wants a slice of the mineral, gas rich resources and cheap labor of a ‘frontier economy,’ while sending China the message that “we run things in your backyard.”

Supporters of Aung San Suu Kyi point to the creation of an Advisory Commission headed by Kofi Annan to blunt the criticism of Suu Kyi’s actions and policies. They don’t mention however that the commission doesn’t have a single Rohingya representative and the two Rakhine Buddhists who have been appointed supported crimes against humanity.

The New York Times’ report on the lifting of sanctions quotes John Sifton of Human Rights Watch, rightly noting that, “It sends a terrible message to say you’re not going to reward a government unless they do something, and then reward them anyway.” This is exactly what the Obama administration has done. While the rhetoric has been generally decent from the administration: saying the name ‘Rohingya,’ calling for restoration of rights for the group, and an end to ‘crimes against humanity,’ positive actions have been few and far between.

The decision to lift sanctions without a word about the genocide means that Rohingya lives are reaffirmed as expendable. Sen. Bob Corker, a Tennessee Republican noted with dismay during his meeting with Suu Kyi today that he was “appalled by her dismissive reaction to concerns I raised this morning about the problem of human trafficking in her country.” We are asked to place our trust and faith in Aung San Suu Kyi, the politician, whose party has already declared that the Rohingya are “not a priority.”

Human Rights organizations will now be focused on strengthening the bipartisan Congressional legislation “Cardin-McCain Burma Strategy Act 2016” introduced on Tuesday, and ensuring it be as strong a monitoring mechanism as possible. For the sake of the Rohingya cause let’s hope they succeed, otherwise in the future we may be speaking of the Rohingya of Burma in the past tense, victims of a “21st century” genocide that happened on our watch.