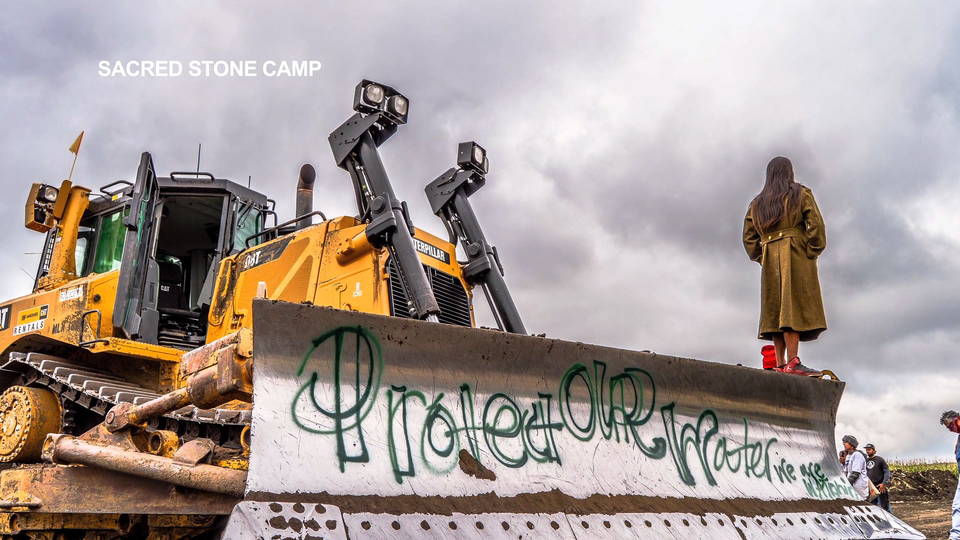 While some Americans continue to dispute Colin Kaepernick’s patriotism, other Americans across the nation join in solidarity with the Standing Rock Sioux Tribe to protest construction of the Dakota Access Pipeline – a $3.7 billion investment designed to run through four states as well as across the tribe’s sacred lands.

Energy Transfer, a Texas based gas pipeline company, says there are major national benefits, profits, and local positive economic impact involving the construction. Yet the Native Americans refuse landowner compensation and proclaim they are fighting for Americans as a whole.

Blueprints of the 1,172-mile long pipeline not only indicate intrusion onto multiple historic and sacred reservations, but also risks irreparable environmental damage. The project authorizes the potential contamination of the Missouri river – a threat to survival of the Native tribes, wildlife, and the overall population in the area. The pipeline has also been proposed without adequate consultation with the Native tribes and ignores the concerns of the U.S. Environmental Protection Agency (EPA), the U.S. Department of Interior (DOI), and the Advisory Council on Historic Preservation – federal agencies that have asked the U.S. Army Corps of Engineers to review and revise its initial plan.

According to a member of the United Nations Permanent Forum on Indigenous Issues, Dalee Dorough said, “Failure to consult with Sioux over the project violated U.N. Declaration on the Rights of Indigenous Peoples.”

Article 19 of the declaration, which the U.S. sanctioned in 2010, says: “States shall consult and cooperate in good faith with the indigenous peoples concerned in order to obtain their free, prior and informed consent before adopting and implementing legislative or administrative measures that may affect them.”

However, in San Francisco, protestors at the offices of the Army Corps of Engineers, the agency that issued permits for the project in July, said the pipeline was illegal. It violated federal laws because the agency improperly used a permitting process that allowed omitting environmental evaluation and public comment.

In July, after multiple appeals and national complaints, the Standing Rock Sioux Tribe released a statement via Earthjustice – an environmental law firm stating the tribe’s intentions to sue federal regulators.

It wasn’t until September 9th, the federal court made a decision on to provide halt to the construction.

“While the Court preliminarily rejected our legal claims, the government heard the Tribe’s call that the process was unfair. It will not issue additional permits needed to cross under the Missouri River, will review the permits it already granted, and urges the pipeline to stand down on any construction within 20 miles of the Missouri. Even more significantly, it recognized that the administration will revisit the whole way in which the government interacts with Indian Tribes on major projects like this one, as we have long advocated.

The decision gives everyone a much-needed “time out” at Lake Oahe and an opportunity to rethink both this pipeline and the broader way in which we approach such projects. While the legal fight will surely continue for now, the Administration has opened the door for genuine problem solving.”

Chairman Archambault II of the Standing Rock Sioux had this reaction to the decision.

But the Federal Judge James Boasberg of the U.S. District Court in Washington, D.C., decided that there is not enough evidence to support the argument that building the Dakota Access pipeline would harm the Standing Rock Sioux Tribe and denied its request to permanently stop construction of the pipeline.

And the government response, although encouraging, was far from definitive.

The Departments of Justice, the Interior and the Army announced that the Corps will temporarily halt authorization for construction of the pipeline around Lake Oahe while it reviews its decisions regarding the large reservoir. The government has only requested that the Dakota Access pipeline voluntarily pause construction within 20 miles of Lake Oahe. Given this is the same company whose security staff used attack dogs and pepper spray on protestors, making the request to pause construction voluntarily is not reassuring.

This battle between the Dakota Access pipeline and the Standing Rock Sioux and their supporters is far from over.

The intensity of battle between Energy Transfer and the Standing Rock Sioux was documented by Democracy Now! in a video that showed Native American protesters being attacked with dogs and pepper spray.

It’s irrefutable, oil companies are the major antagonists when it comes to facing global climate crisis advocates and environmentalists. Furthermore, when an ecosystem of any kind has been dramatically changed by human activities such as agriculture, oil and gas exploration or water diversion, it may no longer be able to provide the food and water needed to sustain future generations.

Perhaps there is a line that needs to be drawn when considering habitat destruction. As in the viral video of the protest documented by Democracy Now! a protestor shouts, “This land belongs to the Earth and we are just the caretakers…”