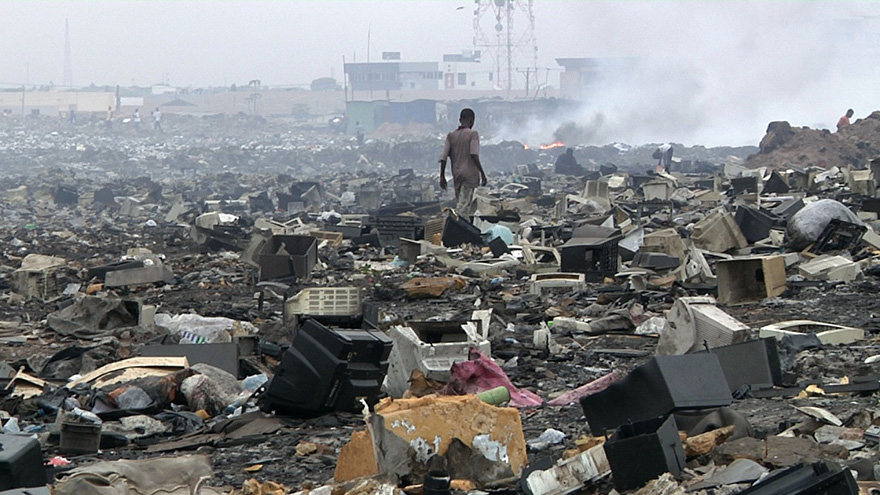 Since the introduction of personal computers in the early 1990’s, our standard of living has continued to rise. With this, companies discovered how to build better and more efficient models of pre-existing products. This development spurred the consumer need to always upgrade and stay at the forefront of technology. However, not much thought was given as to where the discarded electronics would go.

Over the years these items accumulated in large amounts. At first they were simply thrown away with the municipal trash, but after the effects of battery acid leakage were revealed the EPA installed precautionary measures.  Overall these were known as the Universal Waste Act whose goal was to reduce the amount of contaminant that would potentially enter landfills. This regulated the amount of electronic waste and where it would end up once it had reached its life’s end. It wasn’t until 1996 with the Implementation of the Mercury-Containing and Rechargeable Battery Management Act passed by President Clinton, when the recycling of nickel-cadmium and rechargeable batteries was controlled. At the same time, the use of mercury was also phased out.

While batteries were being given attention due to mercury, other electronics were harder to dispose of. Even if citizens did attempt to recycle old computers and televisions, the items had to be sent to specialized locations in order to be disposed of properly. Electronics are made up of various metals, plastics, glue, glass, much of which must be taken apart and separated by material in order to be recyclable. (Similar to the way food-stained cardboard is not accepted in recycling and certain plastics have different chemical properties and sometimes cannot be used together).

Like the processing of municipal waste, states rarely dump electronic waste in the same area where it is consumed. Municipal waste management usually happens where there is no access to facilities that would recycle the materials correctly. Not all states have highly specialized recycling plants. Different states offer various rates per ton of garbage dumped which impacts where waste is sent. Because of this, it is sometimes more economical to ship the waste across county and state lines.

In 2003, the city of Toronto, Canada began shipping its waste to a landfill in suburban Detroit. This caused complaints from Michigan citizens as well as legal jurisdiction issues involving crossing international borders for waste disposal. The US government had to come up with a solution to avoid environmental lawsuits and accusations of class bias as  Canada was sending its waste to a poverty-stricken city like Detroit. As a result, the EPA’s Office of Enforcement and Compliance Assistance created WasteWatcher, an organization that monitors and delivers compliance assistance information for moving solid waste across the U.S-Canadian border. WasteWatcher specifically focuses on Canadian municipal waste importation into Michigan.

The distance between Canada and United States is relatively small compared to the other areas where the U.S. has been dumping its electronic waste overseas. The regulation of exporting e-waste in large amounts (or at all) to other countries had been severely lacking.

While this practice of exporting e-waste to developing nations for profit had been in use for at least two decades, the first person was not jailed for this until 2014.  Joe Benson of the U.K. had been illegally exporting tons of hazardous electrical waste to Africa, specifically to Ghana, Nigeria, Ivory Coast and the Congo. Benson was sentenced to 16 months in prison. He had also been convicted in 2011 for exporting hazardous waste to Nigeria and was appealing that conviction, while continuing to illegally export old televisions and refrigerators.

The court authorized that the rules governing electronic waste are there to protect the environment and human life – Joe Benson’s actions did neither. A jail sentence in his case was important as it was the first time anyone has been sent to prison over an environmental crime, in this case illegal waste exports. Environmental crime is difficult to trace, often because it relies on scientific evidence that a region has been negatively impacted. In cases like Accra, Ghana, it is clear that massive piles of electronic waste surrounding villages in developing countries is a huge health problem.

Electronic waste itself is a symbol of a high standard of living and economic wealth. Ironically, such waste ends up in very populated regions of countries like China, India, Ghana, Nigeria, and along the Ivory Coast.

Most of the world’s electronic trash (a symbol of a high standard of living and economic wealth) ironically ends up in very populated regions of developing countries. The most common being China, India, Ghana, Nigeria, and along the Ivory Coast.

Chris Carroll of National Geographic recalls Accra, Ghana, and the thick smoke from smeltering metals. He explains the hazardous situation in which small children are burning plastics off copper wiring, breaking copper yokes off television sets, releasing lead, cadmium and other neurotoxins and carcinogens into the air, all for the pursuit of little profit. This is extremely dangerous for the inhabitant’s health and the environment. These countries cannot be charged with pubic health endangering practices if their standard of living does not even allow them the ability of changing those practices.

In an effort to slow this e-waste dumping, the Basel Ban was introduced in 1989. The Basel Ban is an international treaty to reduce hazardous waste exportation between countries, especially from the developed to the less developed countries. Although it began to be enforced in 1992, these incidents of damaging e-waste dumping still occur.

Electronic recycling is a fairly recent endeavor in Illinois alone. It was only in 2008 that a comprehensive recycling law was passed that created additional opportunities for Illinois residents to recycle their e-waste. The City of Chicago operates a permanent Chemical and Computer Recycling Facility where residents can properly and safely dispose of their electronic and hazardous products locally instead of exporting them to developing countries and harming the environment.

How many Chicago residents even know about this facility and how many use it?

There is a history of developed nations deliberately dumping useless electronic waste in developing countries. The sheer amount and rate of electronics consumption in developed countries has accelerated this global problem. With the rapid development of new technologies, older models (some only a few years old) are quickly phased out and become e-waster landfill fodder. With this continuous flow of creation and replacement, we generate massive amounts of waste, and much of it is not recyclable.

There are few laws governing the processing of electronic waste and even those laws lack enforcement. It is this situation that makes it much easier for developed countries, like the US, to say “No e-waste in my backyard!”