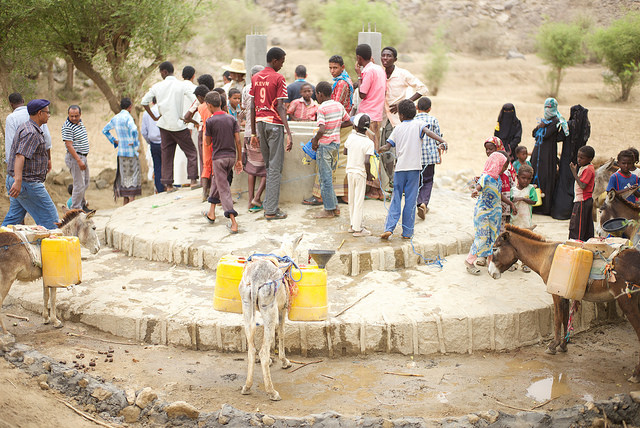 Twenty months into Yemen’s civil war, the country has suffered over 6,800 deaths, an estimated 2.8 million people have been displaced, and 14.4 million are classified by the UN as ‘food insecure’. The conflict between the Houthi minority group and the Yemeni Government is intensified by the involvement of a U.S. backed, Saudi-led coalition fighting to restore the overthrown President Abdrabbuh Mansour Hadi to power. The direct bombing of three Houthi controlled radar sites by American forces earlier this month, justified as retaliatory by the Pentagon, signals no signs of the conflict’s de-escalation, increasing involvement of the U.S., and the continued displacement of 2.8 million individuals that have meagre structures in place to support them in seeking safety and asylum.

As a country of 24 million, the scale of the displaced persons in Yemen is akin to that of Syria or Iran, yet Yemen has not been granted the same international attention, status in refugee applications, media coverage or political airtime.

The refugee situation is complex in Yemen, an estimated 120,000 have sought asylum, primarily in Djibouti and Somalia, while the majority overwhelmingly remain within the country classified as internally displaced. Internally displaced persons face particular barriers to receiving the aid they so desperately need, accurate figures are more difficult to calculate and international assistance schemes are primarily directed towards those who have crossed borders. In the United States you are ineligible to apply for refugee status from your home country, disqualifying a large majority of the displaced Yemenis.

Given its distance from Europe, Yemenis were not among the top 30 nationalities seeking European asylum in the midst of the refugee crisis in 2015. As a result, Yemeni’s are not included in the EU plan to resettle 160,000 asylum seekers across Europe. The plan instead includes mainly those coming from Syria, Iraq and Eritrea.

Further complicating the issue for Yemenis is the basis upon which the EU determines eligibility for relocation. Nationalities are deemed qualified to apply if they have an asylum acceptance rate of at least 75% in European countries. This criterion has left the few Yemenis that have made the trip to European borders stranded in their ports of arrival. Refugees from Afghanistan for example, have a lesser acceptance rate in European countries than the required 75%, and so remain stranded in Greece despite their large numbers, while Costa Ricans are determined eligible despite having no known refugees in Greece.

The International Organization for Migration (IOM) aims to provide a solution by arranging flights for asylum seekers in this position who wish to return home. Paradoxically, Yemenis remain ineligible, the routine bombings of hospitals, funerals, and other community areas, have led the IOM to determine that their home country is not safe for voluntary returns. Under these current policies, Yemenis who have made it to European shores wait in limbo.

Those that do not seek asylum in Europe primarily flee to the Horn of Africa. Around 70,000 have settled in camps in Djibouti and Somalia that are already overwhelmed with the current arrivals, without any sources of major support, these camps will remain grossly unprepared to handle the potential influx as the conflict in Yemen continues.

Among those fleeing the violence are over 250,000 Somali refugees that had sought protection in Yemen prior to the outbreak of war. These refugees now find themselves in a position to flee back to Somalia, which according to the UN, already suffers from a crippled infrastructure in which three-quarters of the population lack ‘access to healthcare, proper sanitation and safe drinking water’.

The potential for the Yemeni migration crisis to spiral into a major international humanitarian crisis is overwhelming. Current asylum and refugee policies are ill equipped to cope with the current situation. As the conflict continues, these infrastructures will only be under greater strain.

As a nation that has provided funding and weaponry throughout the conflict, the US is in a position to influence the nations at the forefront of the conflict, and to take responsibility for its role in the humanitarian crisis. U.S. backed Saudi forces have been accused of violating international law, yet American refugee policies remain designed in a way that excludes many of the victims of the violence. If the U.S. is to avoid implication in international war crimes, it has a duty to take action in preventing war crimes exacerbating the crisis, as well as dealing with the aftermath of those already committed.