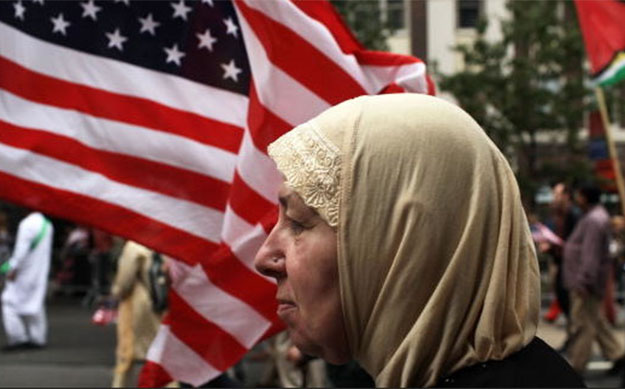 “We will defeat ISIS!” has been a regular rallying cry throughout Donald Trump’s campaign events and television appearances. His suggested ban on Muslim immigrants has garnered praise from many Americans. National security and the threat of groups like ISIS have been key areas of public concern in the years since 9/11 and the topic certainly isn’t the exclusive domain of the Republican Party. Hillary Clinton has been more measured in her comments, but she too has promised to stand firm against the threat of ISIS and other terrorist groups. She has called on American Muslims to stand with her in the fight against homegrown terrorism. While terrorism is a vital issue that needs to be monitored for the safety of the country, it has led both parties to see Muslim Americans exclusively through the lens of national security instead of an important bloc of voters.

Gerald Hankerson, the Outreach Director at the Council on American-Islamic Relations (CAIR) – Chicago, has made a career of standing up for the rights of Muslim Americans and making sure they receive “a seat at the table” in matters of public discourse. Although President Obama became the first president to intentionally include Muslim members in his cabinet, the Muslim community has very little representation in government.

During this election cycle, Muslim Americans have been in the limelight more than ever, but for all the wrong reasons. As a Muslim American himself, Hankerson faces the same difficulties as his community in making their needs known. Muslim Americans are often only brought into public discussions when the conversation involves matters of terrorism and national security. As he puts it,

“Discussion is completely limited to that frame [national security] … There is no other topic in which the Muslim community is brought to the table.”

Violence committed by radicalized Muslim Americans is treated as one of the greatest threats to the safety of the United States. This is in spite of the fact that, according to the traditionally right-leaning source Newsmax, there have been a total of thirteen attacks in the US since 9/11 that have possible Islamic terror links.  Several of these were not deadly and may have been committed for other reasons. This is a small number compared to the fifty mass shootings — defined as a lone shooter killing four or more people — that have occurred in the US in the same period of time, most of which are not suspected of ties to terror.

Meanwhile, Muslim Americans have been busy contributing to our society. In fact, according to the American Medical Association, Muslim Americans comprise about 10 percent of the nation’s doctors despite only making up one percent of the general population. Clearly there are other issues of concern to the community besides potential homegrown terrorist threats. Large numbers of Muslim Americans have grave concerns about the state of US foreign policy as many of them have family members who still live overseas. Others contend with the difficulty of becoming a naturalized citizen. Many, citizens or not, face Islamophobic harassment and profiling daily.

The tendency to reduce the value of an entire community to a single topic reinforces the highly partisan nature of the US political landscape. Communities like Muslim Americans, LGBTQ citizens and sometimes Evangelicals are often reduced to monolithic, single-issue blocs. One topic becomes the main way politicians appeal to these groups in order to gain votes.

Based on the rhetoric coming from both major candidates regarding Muslim Americans, the Democratic and Republican parties are equally guilty of using identity politics to further increase their strength. While Donald Trump tends to represent all Muslims as threats, Hillary Clinton fails to mention them in any context besides questions of national security. Both candidates’ stances appeal to the underlying liberal or conservative nature of their bases rather than to American Muslims themselves. One reason for this may be because Muslim Americans make up such a small and mathematically unimportant segment of the population.

This tendency has been applied to other issues as well, including the pro-life versus pro-choice standoff which appeals to conservative Evangelicals and social liberals, respectively. More often than not, however, other issues within the Evangelical and the Muslim Americans communities are not addressed because of the buzz that a candidate can create around his or her stance on a single hot topic. The aim is an increase in power for the candidate and party, rather than care for the needs and concerns of the groups that comprise the American public.

It’s of the utmost importance for Presidential candidates and their parties to start showing greater concern for important and growing blocs of voters like Muslim Americans. They can start by striving for greater diversity in appointed positions; engaging with and listening to community leaders; and providing more access to education and resources that will allow underserved and underrepresented communities to participate in the political process.

Our leaders need to make this approach a priority, not just for votes but also for those in need. All communities should be represented in and served by the government. Organizations like the CAIR continue to work toward this goal by reaching out to the community and elected officials in order to make Muslim Americans voices heard. It’s important that other communities do the same. In this way, the conversation can shift away from identity caricatures and single-issue, simplistic appeals for attention and move towards a political system that embraces the ever-increasing complexity of the United States and its citizens.

This piece was first published in The Wheaton Record on October 27, 2016.