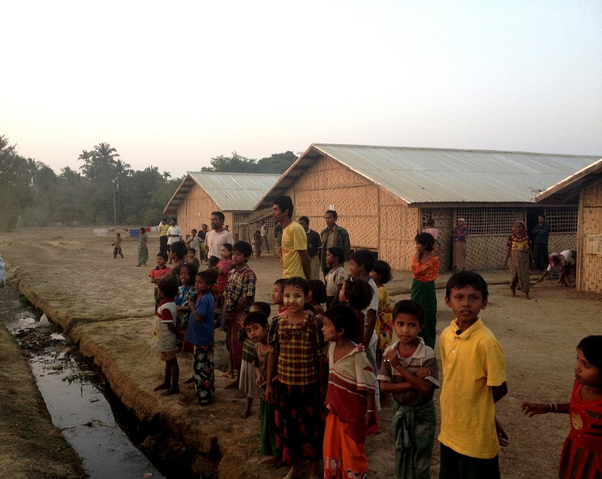 Just before dawn on Monday, October, 10 three Burmese police outposts in the Maungdaw region of Rakhine state, near the Bangladesh-Burma border, were reportedly attacked by armed men wielding knives, sticks and hammers and purportedly yelling “Rohingya! Rohingya!” Nine police officers were killed in the attacks and a number of weapons and ammunition were looted.

Since then videos have circulated insinuating an armed uprising by a group calling itself “Aqa Mul Mujahidin” (Arabic for “Establishing the Wagers of Jihad). If this is in fact true, and reliable information is hard to come by from the notorious “information black hole” that is Rakhine then it would reflect the exasperation of some Rohingya who’ve decided to turn to a militant direction to secure their rights.

Nearly one million Rohingya live in the region, the response by the Rakhine government and Burmese military authorities has been excessive violence and repression. Queen Mary’s State Law Initiative describes it as a ‘predictable escalation in the genocidal process.’ Indeed, reports indicate over 100 Rohingya have been confirmed dead, 700 houses have been burned, 15,000 Rohingya are newly displaced and arbitrary arrests and detention are rampant as the military pursues “attackers.” As we speak horrific images are being shared through social media of dead Rohingya bodies, bodies dumped into mass graves and the burning down of houses in Rohingya villages.

By so quickly placing blame on the Rohingya as a whole for the attacks the authorities have fed into the endemic anti-Rohingya and Islamophobic atmosphere pervading the nation. Police General Zaw Win and Rakhine state representative Tin Maung Swe immediately pointed fingers at the long defunct Rohingya Solidarity Organization (RSO), which hasn’t been in operation for over two decades.

As one Rohingya man whose village has been targeted for raids, curfew and extrajudicial detentions questioned, “How is it possible that we have ties with RSO? We are staying under police surveillance and it is very difficult to even travel to nearby villages.” Yet, still him and others are being implicated as part of a larger conspiracy, which sees Rohingya as “fifth-columnists.”

Democratically elected State Counselor Aung San Suu Kyi has so far resisted joining in with the military, police and Rakhine authorities in blaming the Rohingya, only saying “she would not accuse any individual or organization before obtaining evidence regarding the culprits.” While her response is far from idyllic, it is a call for calm and an indirect repudiation of those who are placing blame on the Rohingya.

However, her neutral stance also effectively means silence in the face of state abuses against the Rohingya. Matthew Smith of Fortify Rights has noted a well-known fact among rights groups: “there has never been a meaningful militancy among Rohingya despite decades of atrocity crimes and unthinkable brutality.” The Rohingya struggle for self-determination, dignity and against the genocide of their peoples has been entirely peaceful. A remarkable fact when considering not only the dozens of insurgencies across the nation, but also the systematic persecution the Rohingya continue to endure.