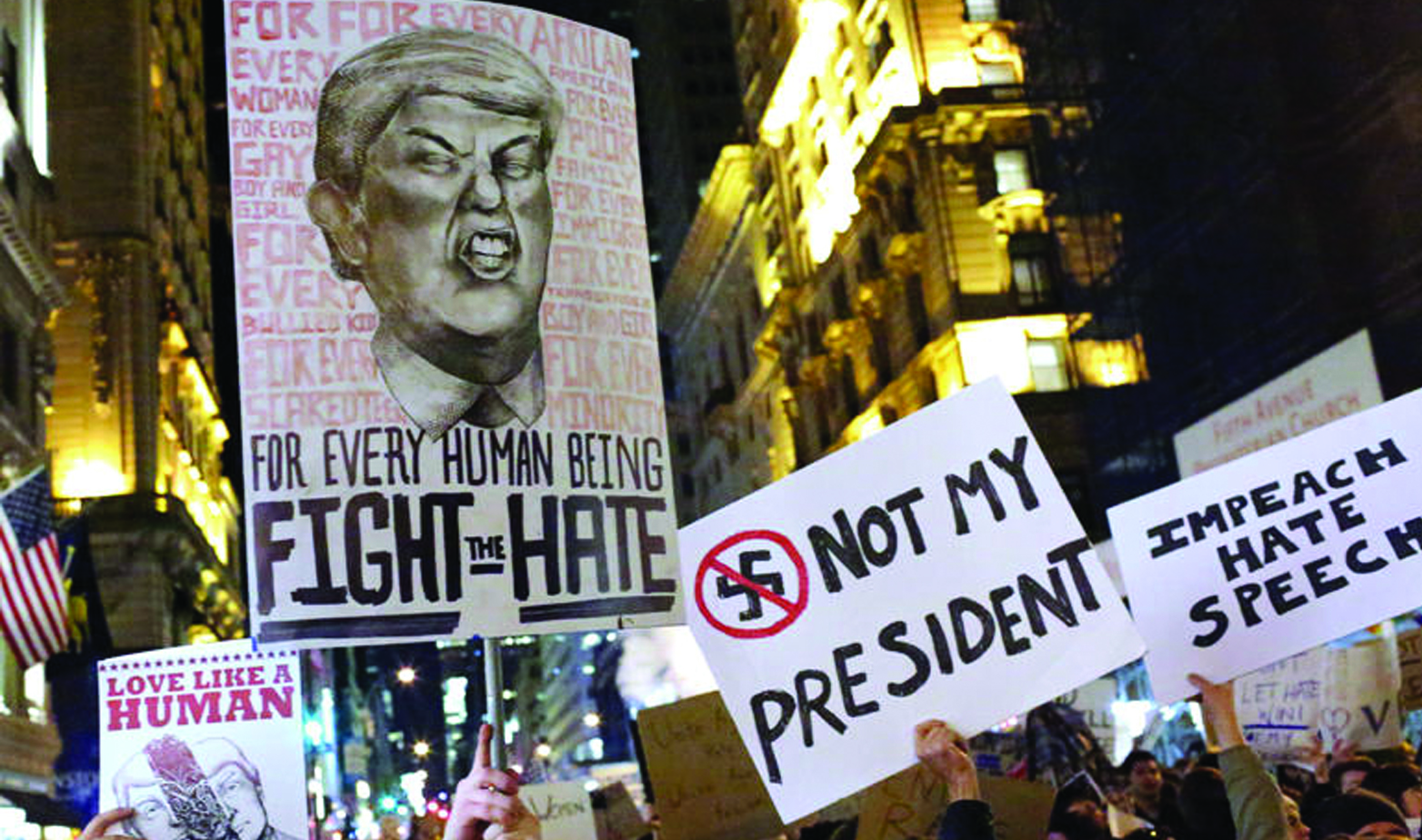 First and foremost, I’m sending love and support to you all. I’ve been receiving an overwhelming amount of messages since the results of the 2016 USA presidential elections — some hateful (so nothing new there), many notes of love, and even more messages of guilt.

The latter of which inspired this post.
(As did safety pins and particular hashtags).

And during this post-election countdown to the Trump presidency, people are quickly scrambling to find ways to support each other. “Allyship” has been the trending word of the past two weeks and never before have I seen it done so wrong. Building coalition, intersectional work, and working together is absolutely required to be able to collectively challenge systems and structures of white supremacy, protect our people, and support our friends – but we have to make sure we’re not perpetuating microagressions against those we are trying to support at the same time.

Below are 5 things to keep in mind to help prevent this.

Note: while the list below is largely created with white allies in mind, other people of color can also fall into these issues when trying to support other groups they have little experience working with.

5 things for allies to keep in mind:

1. Ask yourself: who asked me?

Did a person of color ask you to pin a safety pin to your shirt to make them feel more comfortable sitting next to you on the train? Or is this just a visible way that white people have decided to make themselves feel better about themselves and their guilt? While the sentiment is of course appreciated, trust is built through action, not symbols. Rather, mistrust is built through years of institutional oppression that benefits people who look like you at the expense of people who look like me – and who are a lot darker than me. If someone was to get into a confrontation with a Black person on the bus, would a safety-pinner have de-escalation skills? Or would they call the police, the enforcement mechanism of institutional white supremacy? The cause of the death of countless Black people across the country? (Fun fact: the Fraternal Order of Police, the largest police union in the world, endorsed Trump.)

Decisions on what solidarity looks like should come from the people who you want to be in solidarity with.

At the end of the day, you can pin whatever you’d like to your clothes, but allyship means supporting marginalized and oppressed people in ways that they themselves have asked for it. It is not a savior complex of assuming what is needed from the outside and swooping in to deliver. It’s listening to the people who you want to be in solidarity with. It’s following what they’ve already identified as areas where they need allyship, and asked for it.

You can’t claim allyship. You have to earn it.

While being aware of the first question usually helps avoid this one, (and in fact the contrary tends to be true as well), replicating oppressive systems in allyship has been too excessively present on social media to leave this one out.

A viral facebook status was making rounds and had a list of things that the person who was sharing would do in a post-Trump America. I don’t really remember what all was mentioned on the status, as I stopped reading after number 1: “I will sit next to a hijab-wearing Muslim woman on the bus.”
*flips computer*
This status also comes after only an influx of images of people (usually white men and women) offering to sit next to Muslim women on the train, walk hijab-wearing women home, and say that they will sign up for whatever Muslim registry Trump creates.

But here’s why I flipped my computer and now have to type this post from my phone*:
Muslims – especially hijab-wearing women – in these “solidarity” posts are are being portrayed in the exact patronizing, weak, infantilizing, and helpless way that Islamophobia and Orientalism portrays us. Why do hijabi women always need someone to sit next to them on the bus but the same is never suggested for queer women? For Latina women? Just remember:

If your solidarity and allyship replicates the same rhetoric that the USA uses to justify military occupation (re: hijab-wearing women as weak and in need of physical saving), you’re doing it wrong.

Also side note: the Muslim registry Trump is talking about already exists. It’s called a no-fly list. It’s called surveillance of mosques. It’s called Countering Violent Extremism grants by the Department of Homeland Security that target Muslims for information gathering and spying. It’s called the fusion center. And you haven’t signed up for any of them. (unless you’re Muslim, then you’re probably already documented somewhere). Rather than walking next to me, show your allyship by donating to a rad new organizing collective of Muslim women in Chicago.
*no computers were damaged in the making of this post

3. Hold yourself accountable. (and allow others to hold you accountable too)

Being an ally means listening, constantly self-educating, and being open to criticism and accountability. Of course none of us are perfect, and we are all constantly unlearning and learning, but it’s important to own up to your mistakes/lack of knowledge when called out for it.

While “call-out culture” is harmful and toxic, (call-out culture being unfortunately dominant in many activist/organizing spaces and does not leave room for people to learn from mistakes but rather just be called-out and shunned), it’s important to note that being criticized may not always be done kindly or with much patience – and that’s okay.

You shouldn’t rely on those who you want to be in allyship with to teach you about their issues or correct your mistakes. But when they do, it’s important to listen, learn, and change your behavior. Don’t challenge personal experiences. Don’t tell someone the “right” way to express their rage. And never argue against constructive criticism in the way you are performing your allyship. After all, as mentioned in no.1, allyship is earned, not a self-proclaimed title.

4. Trump IS your president. (and chants won’t get you out of it)

To those chanting #notmypresident – are you saying that any of the former presidents were yours? From those who committed genocide against indigenous people and constructed the very laws and systems of upholding white supremacy and keeping Blacks enslaved that have produced your new president-elect? Or any of the more recent presidents who have approved mass baseless surveillance of Muslims domestically and drone strikes, military occupations, and complete devastation of Muslim communities abroad?

Or even the current president Obama, the #bae of the liberals, who still hasn’t called for an end to the violence and torture of indigenous people defending their own clean water at Standing Rock, has deported more people than any other President before him, expanded the fusion center, and has given the largest amount of monetary support to Apartheid Israel in their military occupation and international human rights violations against Palestinians?

If Trump is #notyourpresident because of his racism, anti-Muslim, and anti-immigrant positions – then why were any of the former presidents yours?

To those who are anti-Trump and want to organize against white supremacy – here are a few other related hashtags to include in your next tweet: #abolishpolice #freepalestine

If any of those hashtags make you uncomfortable, then the complexities of white supremacy may not be entirely clear.

The police and law enforcement are the domestic militarized arm that protects and enforces white supremacy. We’ve talked about hyper-militarization of local law enforcement; its root in anti-Blackness and acceleration by anti-Muslimism; and its suck of resources and funding from education, mental health, and other community resources from Black neighborhoods and other neighborhoods of color. We’ve also talked about how their government-sponsored and weapon manufacturer-sponsored trainings are wrought with anti-Blackness and anti-Muslimism, with trainers telling local police – now armed with military-grade weaponry – to “shoot first and let the media ask questions later.”

And where do some of these anti-Muslim trainers come from who teach “shoot to kill” and other military tactics? The only country in the Middle East the USA didn’t screw over: Israel. Not only does the USA not screw over (read: systematically destroy, exploit, humiliate, rape, and oppress) Israel like they have Iraq, Afghanistan, and others, but they actually massively support Israel and its countless violations of international human rights laws. In fact, Obama has given the largest monetary support to Israel yet. (still only Trump is #notmypresident?)

And because it seems your only trigger word is “Trump”: Netanyahu, the current prime minister of Israel has endorsed Trump – and came out with a gross congratulations video immediately after his win, too, calling Trump “a great friend of Israel.” We also mentioned the police union endorsed him too, right?

Along with the KKK and ISIS.

So it’s important to understand while yes, Trump is a particular kind of unfiltered white supremacy, the results of the 2016 presidential elections in the United States have only made visible what us marginalized people have been organizing against, fighting, and challenging from the beginning of it all. While his victory was not expected, it was not surprising. Trump’s rise to power and ultimate election win would not have been possible without deeply-rooted and institutional white supremacy that manifests in countless ways: from police and prisons to no-fly lists.

P.S. I was serious about donating to this rad new Muslim women/femme/non-binary collective, That is allyship.