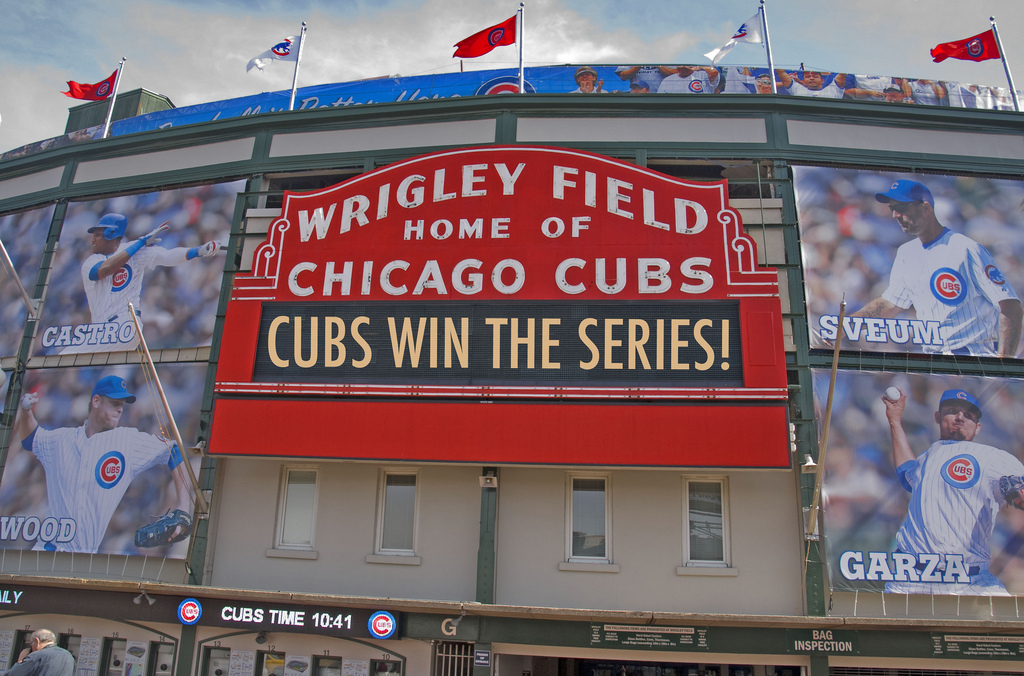 I drove by Wrigley Field for the first time in September 2015. I had just moved to the U.S. and my relatives were dropping me off to my new home that I had reserved on Craigslist. They pointed toward the stadium and said, “This is a Chicago landmark.” They seemed pretty excited that I was going to live just half a mile from the home of the Chicago Cubs. I didn’t really understand how that would be special.

For the next year, I saw Wrigley Field everyday on my commute to and from my university, newsroom, dinners or reporting assignments. On some of those days, I watched huge crowds of people in blue rooting for a team and a game I didn’t relate to. And on some other days, I longed for all the excited people that would unknowingly make the surroundings so lively.

I gradually started getting used to living in a neighborhood that was deeply inspired by and devoted to its favorite team, a team that hadn’t won the World Series in more than a 100 years. I never quite fathomed what kept them going until I experienced the Chicago Cubs almost reaching the World Series in 2015.

That’s when I did my first story about Cubs’ fans. I stopped people on the street and asked them to talk about Chicago’s baseball frenzy and the Cubs. Three old women told me the story of the Billy Goat curse and said that this year the curse would be lifted. They were sure. I wasn’t.

Soon after, I met a man sporting a Chicago Cubs hat graciously smiling at me. For him, the Cubs was less of a baseball team and more of a family tradition. He clearly believed that based on a premonition in the movie, “Back to the Future,” the Cubs would definitely win the World Series in 2015.

I still didn’t understand the commitment. Or maybe I didn’t want to. When you’re from India, it’s difficult to accept a sport that is played with a bat and ball and is not cricket. For me, baseball was just a slower and dreary version of cricket.

But when the Cubs lost their match against the New York Mets in 2015 and lost their chance to play in the World Series that year, I saw something I hadn’t seen before. The street right outside the Addison red line station was the emptiest in months. No blue shirts. No Cubs hats. No noise. No crowds. Just one day had changed the neighborhood entirely. For the first time, I felt miserable. For the first time, I cared.

I finally left Chicago two months ago. But I never left the spirit that the city infused in me. This year the Cubs made it to the World Series. All this time, I thought about the three women, the thousands of fans I used to meet on the streets, the merchandise stores, the bars and the constant cheering. This year, I rooted for the Cubs. On Wednesday night, I constantly checked the scores of the final “match” hoping that the curse of the Billy Goat would finally rescind – even then still using my cricket words.

I didn’t care about baseball as much as I did about the Cubs and about the city that was my first home in this country. Early next morning, I found out that Chicago Cubs had ultimately won the World Series after 108 years. I was ecstatic but also sad for missing this huge moment of pride in Chicago. I wanted to be there, to witness a historical night in my neighborhood, to see those blue streets and signs and posters and to hear those loud noises that once bothered me.

My Facebook feed was filled with posts about the victory. I smiled when I saw pictures and videos that helped me feel closer to the true fairy tale that had just been created. But for someone who has never watched a baseball game, this success didn’t only belong to the Cubs or even to the sport. This was always about the people who kept up their faith even on the worst days. This victory was and is about Chicago and the passionate people who call it their home. Like I do.