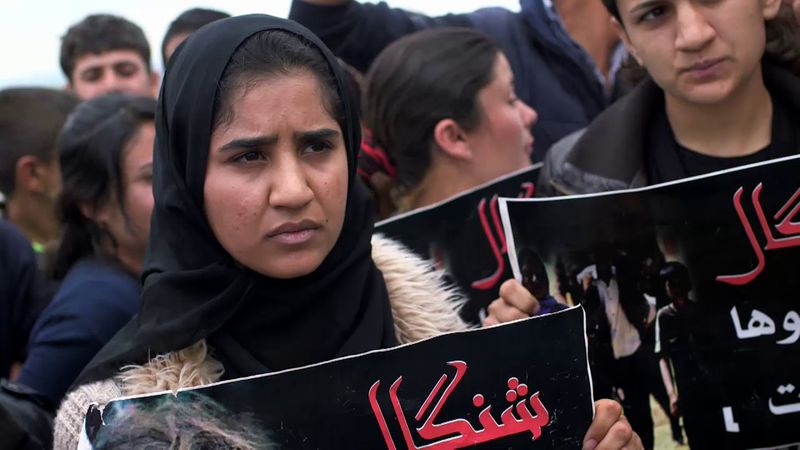 “I basically jumped on his feet, and I told him, I begged him, ‘Free me from this huge person, take me for yourself and I will do whatever you want.’ Then he took me for himself. That night, he beat me up, forced me to undress, and put me in a room with six militants. They continued to commit crimes to my body until I became unconscious.”

The story of this 21-year-old Yazidi girl, Nadia, begins on the morning of Aug 15th, 2014. She remembers seeing the ISIS fighters in her town, separating the women and men. As they were rounding up the people, Nadia saw 6 of her brothers get murdered right in front of her eyes. Shocked and in disbelief, Nadia is taken from her town and forced into the world of ISIS sex slavery. She is beat, raped, and tortured as she is transferred from one captor to the next. In a state of pure helplessness and fear, Nadia professes, “I did not want to kill myself — but I wanted them to kill me”.

Stories like Nadia’s aren’t uncommon within ISIS. More than 5,000 Yazidi women have been captured and taken as slaves by ISIS members. There is a whole market which includes everything from buying, selling, and trading female sex slaves. The Yazidi women often must witness the murder of their male relatives and soon after are transported to be sold.

The whole market is reliant upon ISIS members who believe that they are simply fulfilling the will of God. The organization put out a rulebook, “Questions and Answers on Taking Captives and Slaves,” which detailed the guidelines on how to treat the prisoners. One of the rulings in the guide stated that men can have sex with captured women if she is a virgin and a non-believer. This puts the captured women at the disposal of ISIS men. Their justification of these horrendous acts doesn’t stop here, however. Another ruling stated that it is permissible to strike the women if they are disobedient, but doesn’t allow men to strike their faces or to steal another man’s slave. These rulings prove that captured women are seen merely as property to the men of the Islamic State. The humanity, dignity, and respect of the women are completely lost to these men.

ISIS members justify these actions through Islam. Their ability to feel no guilt stems from their belief that all these actions are to bring them closer to God. How true is this and how accurate are these “rulings”?

The majority of Muslims and experts on Islam assert that these rulings are not only radical misinterpretations, but that they also go against the actual teachings of the Qur’an. In Chapter 2 verse 128 of the Qur’an, it says,

“And for women are rights over men similar to those of men over women.”

Not only does the Qur’an respect women and their rights, it encouraged ending slavery.

During the time Islam was born, slavery was an integral part of the society. It was not something that could immediately be abolished. Nevertheless, Islam taught people to treat their slaves with kindness. In a hadith, the Prophet Muhammad is reported to have said, “Whoever frees a Muslim slave, Allah will save all the parts of his body from the (Hell) Fire as he has freed the body-parts of the slave” (Bukhari Volume 3, Book 46, Number 693).

This issue is that the Islamic States misinterprets verses and allows Islam to be radicalized and turned into a platform that only serves their own political and said, “The roots of this document can easily be traced back to some of Islamic State’s most active propagandists, something that leaves little doubt in my mind about its credibility”. Similarly, Kecia Ali, Associate Professor of Religion at Boston University believes, “The Islamic State’s attempt to create an imagined pristine community relies on a superficial and selective enactment of certain provisions from scripture and law.”

ISIS isn’t the only organization to take Islamic law out of context. Islamophobes use the concept of ISIS sex slavery to label all of Islam as immoral and violent. One prominent Islamophobe, Robert Spencer, wrote an article on how defending Islam in light of ISIS sex slavery is simply a “far-Left Agenda” and is “appalling”. Spencer goes on to cite the same Qur’anic verses and hadiths that ISIS themselves use. The scary part is that Spencer has spoken to groups such as the U.S. Central Command, the FBI, and the Joint Terrorism Task Force on the topic of Islam. What Spencer overlooks and doesn’t mention in his talks, however, are the billions of Muslims who practice a religion where freeing a slave and treating women with respect are highly respected actions.

Many times, people forget that the women who are raped, tortured, and mistreated are often Muslim themselves. The Islam the women follow, however, is vastly different than the version that the Islamic State propagates. The problem remains, however, that there are still too many women and too many young girls that are taken as slaves. As more and more girls are telling their stories, though, it is an indictment against ISIS and its abhorrent ideals.

Nadia’s testimony was one brave stand against ISIS. After escaping from ISIS; she went on to tell her story as a stand against an Islamic State that violates women, basic human rights, and the true teachings of Islam.