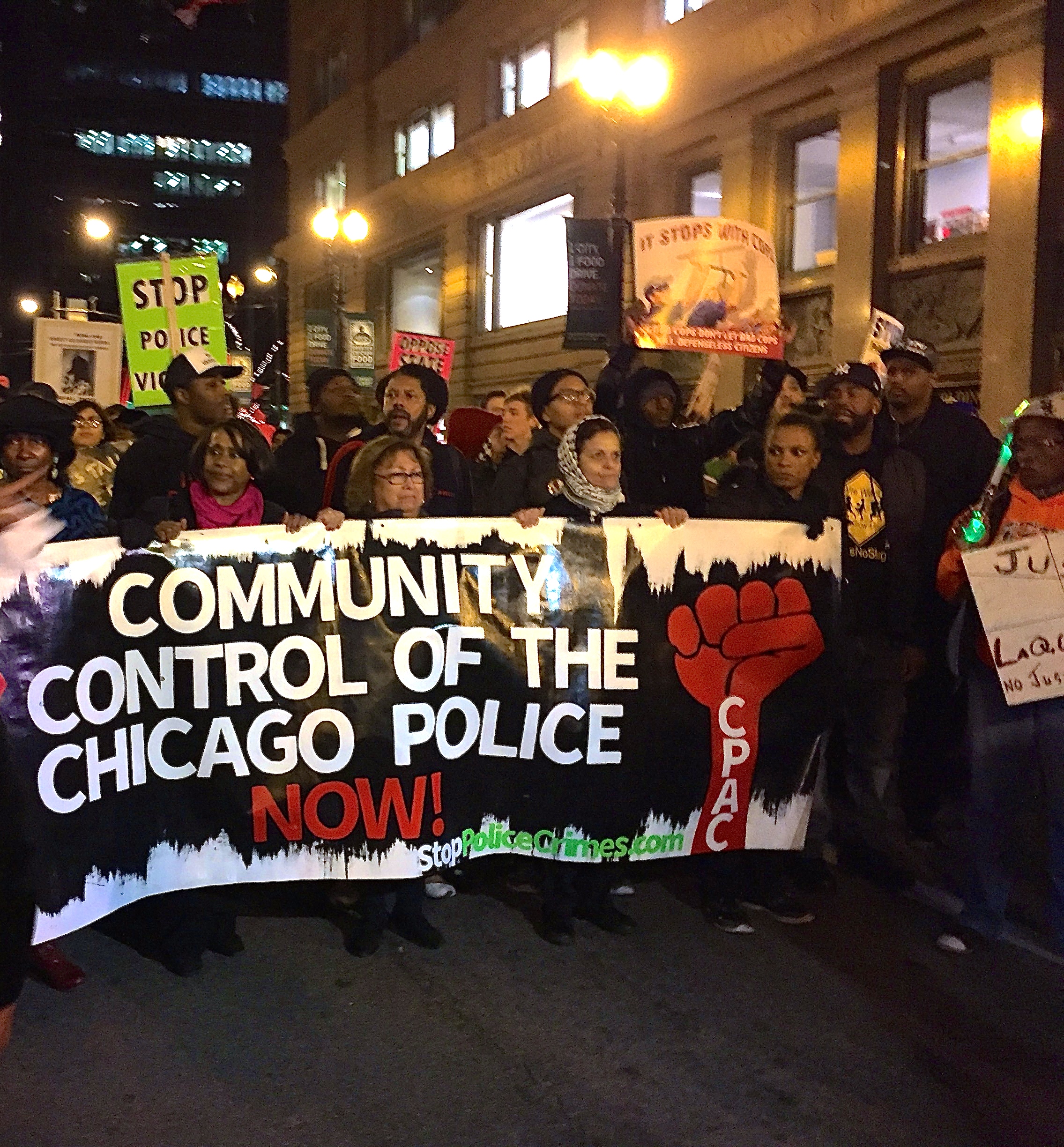 Statement from the Chicago Alliance Against Racist and Political Repression
(CAARPR)

What we have in the Department of Justice (DOJ) Report on the Chicago Police Department (CPD) is evidence of Chicago police officers routinely engaging in murder, brutality and torture and blatantly violating our supposedly federally protected Constitutional rights. And yet not one recommendation comes out of this report calling for the prosecution of police who have committed these crimes. But it is important to summarize what we do have in this so-called historic, investigative report so we can assess how our movement for justice and community control of the police must forge ahead in spite of every effort of the powers that be to stop us.

According to the DOJ on December 7, 2015 the Civil Rights Division, Special Litigation, and the United States Attorney’s Office for the Northern District of Illinois, jointly initiated an investigation of the City of Chicago’s Police Department (CPD) and the Independent Police Review Authority (IPRA).“This investigation was undertaken to determine whether the Chicago Police Department is engaging in a pattern or practice of unlawful and, if so, what systemic deficiencies or practices within CPD, IPRA, and the City might be facilitating or causing this pattern or practice.” (Report, 1)

The first assessment the DOJ investigation made was on the question of violence pursuant to the Violent Crime and Law Enforcement Act of 1994, written by Senator Joe Biden and signed into law by President Bill Clinton. This Act, among other things, prohibits “any person acting on behalf of government authority to engage in a pattern or practice…that deprives persons of rights, privileges or immunities secured or protected by the Constitution or laws of the United States.”

It is made clear at the outset that the principal act of violence that precipitated this DOJ investigation was the brutal murder of Laquan McDonald, who was shot 16 times by Chicago police officer Jason VanDyke. It is acknowledged that this murder reflected a deeper systemic problem. The widely viewed video of the murder of Laquan McDonald exposed to the light of day the fact that CPD officers’ use of deadly force was unlawful and that the City’s system of detecting and correcting it was really a system designed for excusing and justifying it. What the DOJ says is that this system was broken or flawed. What we say, and what the McDonald case proves, is that the system was designed and built to do exactly what it was doing and is presently doing.

The DOJ Report on Chicago demonstrates beyond any reasonable doubt that the Chicago police are engaging as a matter of policies and program in a pattern and practice that violates the rights, privileges and immunities that are supposed to be protected by the Constitution and laws of the United States.

This report through data analysis, reviewing thousands of pages provided by the CPD, and the Independent Police Review Authority (INPRA), interviewing 340 individual police officers and over 1000 community members provides abundant proof that the CPD’s policies and racist practices have put Black and Brown communities in a state of siege.

The DOJ, however, says it sees hope on the horizon with the Mayor and the City Council creating by legislative fiat a Civilian Office of Police Accountability (COPA) to replace IPRA. In fact COPA is a merely a bureaucratic change that maintains the same polices as IPRA. These piece meal reforms were put in place to set the stage for partnering with the DOJ in rehabilitating the police through training, etc. so they can more effectively control our communities. In short keeping us powerless and totally without a voice in who polices us and how we are policed. The DOJ’s projection that it will be working with Mayor Emanuel and the CPD to correct the long standing systemic problems of police crimes leaves the people in our communities with no hope of justice coming from state, local or federal authorities.

What the DOJ did in Cleveland, Ferguson and Baltimore they are now doing in Chicago. The DOJ is ignoring the democratic demands of the people for justice and community control of the police; they are siding up with a Mayor and police force that covered up the brutal murder of Laquan McDonald and is still covering up murder and torture in hundreds of other cases.

It was really tragic-comic seeing the DOJ with Mayor Emanuel and Police Superintendent Johnson acting as if they are united in addressing the problems of police tyranny and violence in our communities. They seek a solution through working with the police to help the police to raise themselves up to constitutional standards.

In other words they are suggesting that we trust the people who created the problem to solve the problem.

The only way to break through these meaningless approaches of so-called reform is to empower the people to hold the police accountable. This is the struggle we must continue. That is why we must intensify our campaign for an all elected Civilian Police Accountability Council (CPAC). #CPACNOW

Chicagoans Speak Out on Department of Justice Report – We Don’t Need the Feds!