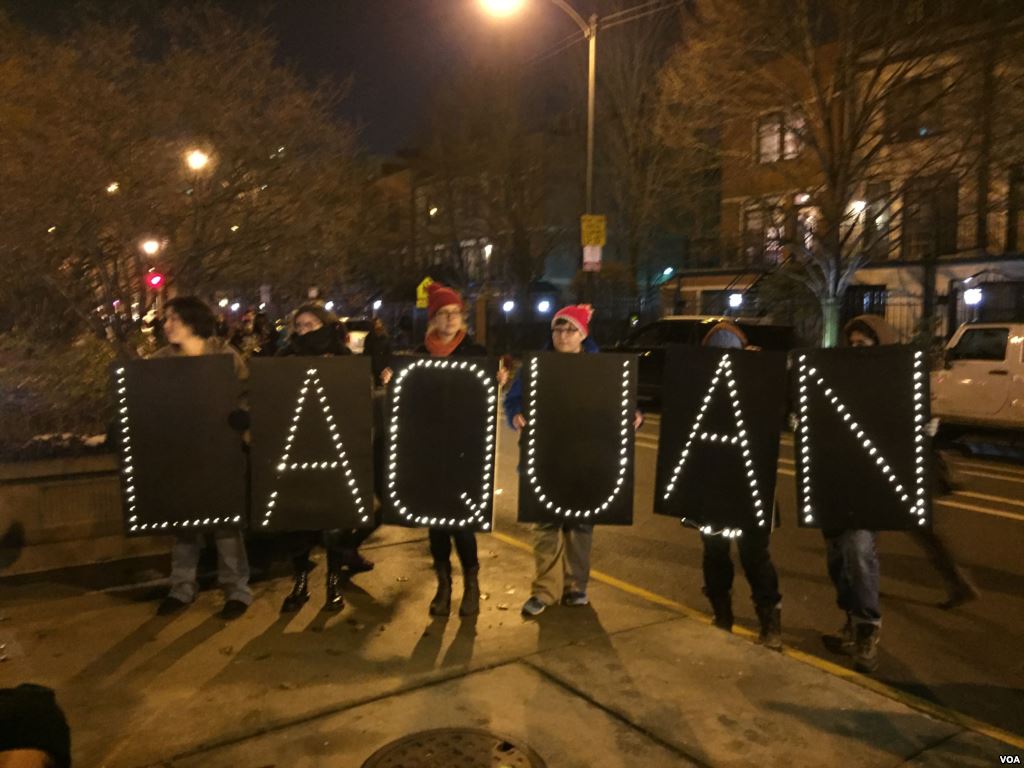 The Department of Justice (DOJ) will be releasing its long awaited report today on the Chicago Police Department (CPD). So here are some things you should know about our movement and the DOJ. We will issue a follow up statement and hold a public forum after we read the report.  We at the Chicago Alliance Against Racist and Political Repression, alongside family members of victims of police murder, torture and abuse, originally made an urgent request for US Department of Justice intervention in Chicago in August of 2014.

We submitted a letter documenting unresolved complaints of CPD’s patterns of abuse, especially in poor and Black and Brown neighborhoods. This letter was accompanied by completed complaint forms and signed by 66 members of families of victims. We presented these documents at the Chicago field office of the DOJ, with copies going to Washington, DC. Our letter and these families were not acknowledged. One week later U.S. Attorney Zachary Fardon stated that there was no impending investigation of the Chicago police, whom he called “our front-line partner”.  Within two months of this inaction by the DOJ, both Ronnieman Johnson and Laquan McDonald lay dead. The video evidence was locked away, and the cover-up was in high gear. Twenty more Black men were killed by CPD before the Laquan McDonald video was released by court order.

Might some of them still be alive today had the DOJ acted in 2014?

On December 10, 2015 we came calling again. We submitted another letter at the Chicago office of the DOJ, together with more complaints signed by 90 family members, calling for DOJ intervention in Chicago to hold the police accountable pursuant to Civil Rights statutes and the U.S. Constitution. A crowd of 500 protesters joined us on the street below, as family members were herded into a small reception area and were not even extended the courtesy of a meeting where they could air their grievances. Again, copies of the letter were sent on to Washington. The letter and the attached complaints totaled 260 pages exposing damning evidence of racist police crimes in Chicago.

Finally, the DOJ decided to intervene in Chicago, but only after weeks of massive street protests and revelations of the cover-up surrounding the Laquan McDonald video.

Under continued pressure, the Special Litigation Section of the Civil Rights Division of the DOJ called a special hearing for our group of complainants on March 23, 2016. Survivors gave passionate testimony on each of their cases. They also demanded that the DOJ investigation result in the prosecution of criminal cops. The DOJ investigators stressed that they were only looking into “patterns and practices” by police departments that violate the Constitutional rights of people. Cases would have to be conveyed to the DOJ Criminal Division for investigation.

Reliance on the DOJ to fix the CPD is misguided.

The process works like this. The DOJ investigates and publishes its findings, a year-long process. It enters into an agreement with a city to implement a series of changes. If the city fails to comply, the DOJ sues in federal court. At that point, a judge may or may not appoint a monitor to oversee the implementation of the agreement. Once the suit is terminated and the monitor is released, the police department can go back to the way things used to be.

DOJ Investigation of the Cleveland Police

Cleveland, Ohio has had two investigations. The first one began in 1999 and resulted in a consent decree that was implemented in 2004 (5 years later!). The Cleveland Division of Police was trusted to implement the changes itself. The CDP was released from its decree in 2005, and, by the end of that year, there were at least four fatal police-involved shootings. Another consent decree was put into place in 2015. The shooting death of 12-year-old Tamir Rice in 2014 occurred while the investigation leading up to this latest decree was being conducted.

The DOJ investigation did not deter criminal police activity and instituted no prosecutions.

This pattern, with variations, has been repeated in other cities. Consent decrees have tweaked police practices or left behind ineffective oversight bodies (like we currently have) with a predictable nod to community ‘input’. Let the people vent, but don’t give them power.

Chicagoans Speak Out on Department of Justice Report – We Don’t Need the Feds!