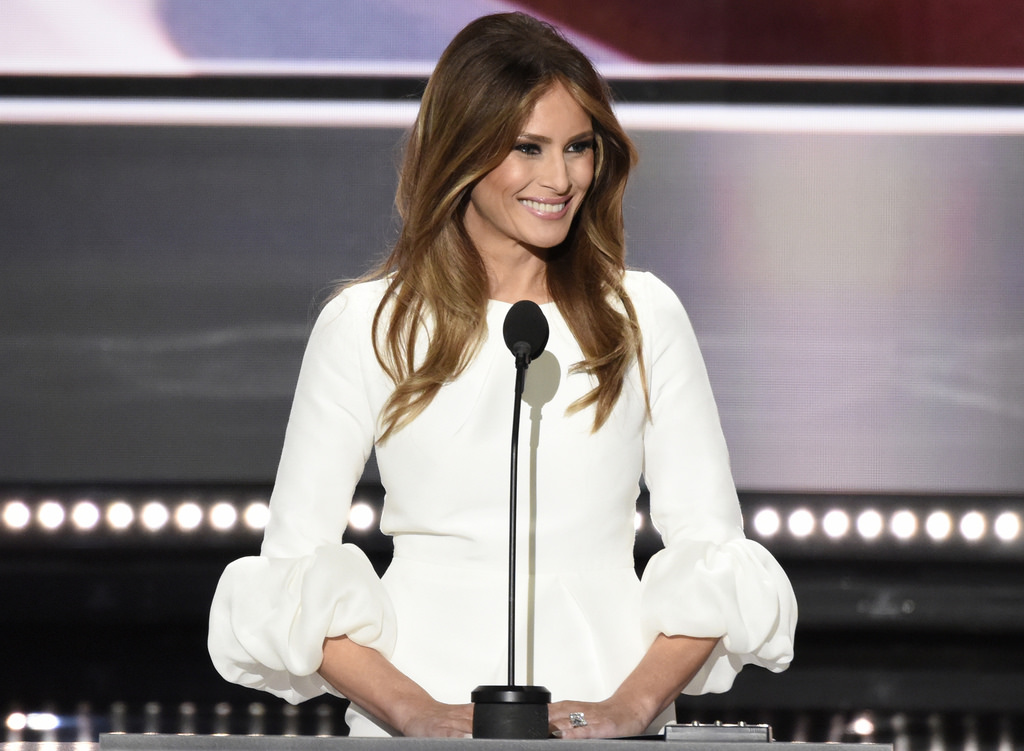 With the election of Donald Trump, the focus has been on Trump’s competency as President as well his controversial transition into office. The people of this country are still trying to decipher if the racist, misogynistic Trump that America experienced during the campaign is the same Trump that will become the President of the United States on January 20th. With the attention on him and his appointments, there has been very little discussion about another very important role to this country: the Office of the First Lady.

It’s almost as if she doesn’t exist.

Office of the First Lady

Historically, the Office of the First Lady focuses on prominent social issues. Hillary Clinton chaired the Task Force on National Healthcare Reform and also was an advocate for women’s rights and children’s issues. Laura Bush was also an avid supporter of children’s issues and launched her own education initiative for early childhood education. Michelle Obama launched her “Let’s Move” campaign against childhood obesity as well as “Reach Higher” and “Let Girls Learn” which both focus on promoting education. With Donald Trump becoming President later this month, what can we expect from the Office of the First Lady and the disappeared Melania Trump?

Melania, unlike Trump, is described as very cool-headed and poised. Born in Slovenia, she experienced a very different upbringing than the average American. Her mother developed patterns at a children’s clothing factory, while her father was a businessman. Although she was born into Communist Slovenia, her family lived well and had more privileges than those around them. Melania’s interest in fashion stemmed from her mother’s work and the family’s travels to Western Europe. She was originally accepted into the school of architecture at the local university and then began modelling part-time. After a year, Melania dropped out of college and moved to Milan to pursue modelling. She lived in Paris for some time as well and then finally moved to New York where she met Donald Trump.

Many of Melania’s classmates and colleagues say that she was always a private person and didn’t care for partying like most other people in her industry. She was quiet, reserved, and always home early. This is what set her apart from all the other models and her independent, strong, professional poise is what eventually drew Donald Trump to her.

Being the Spouse of Donald Trump…

Given her reserved nature, it’s no surprise that Melania hasn’t been very vocal during the election. When Trump was first contemplating running for the presidency, Melania told him to think it over and to be sure because their family dynamic would be greatly impacted by his decision. She made it clear to Trump while he was on the campaign trail that her first and foremost priority would be her ten-year-old son Barron. From the beginning of the Trump campaign, there were rumors that Barron Trump was autistic and as a result Barron was bullied by the media. Melania was determined to put these rumors to rest and stood up for her son. A video was posted on YouTube featuring footage of Barron from various moments throughout the campaign suggesting he was autistic. Melania had her law firm threaten to litigate if the video was not taken down. Harder of Harder Mirell & Abrams LLP in Los Angeles stated, “A video was posted at YouTube recently speculating that Barron might be autistic. He is not.”

Melania’s prioritization of Barron has continued even after Donald Trump was elected. It was just recently announced that Ivanka Trump and not Melania Trump will be assuming First Lady Duties until Barron is finished with school in New York City. He is bilingual (also speaking Melania’s native Slovenian) and attends the Columbia Grammar and Preparatory School in Manhattan. It seems that Melania is keeping true to her reserved and self-engaged attitude as well as being a normal, protective mother of her young son.

Melania initially staying in New York to support her son at first look appears a natural response of a concerned mother. Donald Trump quickly demonstrated its underlying meaning by moving his daughter Ivanka immediately into the Office of the First Lady. This is the most obvious of many actions Trump has taken to project to the media that Melania plays no important role in his Presidency.

When Melania Trump eventually assumes First Lady duties, she will not only have to measure up to previous women in that position, but she will also have to live up to being an advisor to a President who often ignores her.

Melania admits to CNN that, “I give him my opinions, many, many times.” She also says, “I don’t agree with everything that he says but, you know, that is normal. I’m my own person, I tell him what I think. I’m standing very strong on the ground on my two feet and I’m my own person. And I think that’s very important in the relationship.”

To know how Melania will act as First Lady and how she will advise Trump, it’s essential to know her political opinions. Melania admits that “Nobody will ever know” her real political views, but with her public appearances and being in the spotlight as the in-coming First Lady, Melania seems to have let some of her views be known.

The most prominent and widely covered version of Melania is the spouse who constantly defends her husband. The most infamous example was Melania defending Trump against allegations of sexual misconduct from a 2005 tape of Access Hollywood. In her first interview since the Republican convention, she called those accusations “lies” and said Trump was “egged on” into “boy talk” – an echo of Trump’s characterization of it as “locker room talk.” She also used the common defense of accusing the accusers. “This was all organized from the opposition. And with the details … did they ever check the background of these women? They don’t have any facts.”

She also said she hadn’t heard her husband use that kind of language before. “No. No, that’s why I was surprised, because I said like I don’t know that person that would talk that way, and that he would say that kind of stuff in private,” Melania Trump said. In this case, Melania herself is encouraging her media image as the “stand by your man” loyal spouse. She continued in this vein with her remarks at the Republican National Convention by saying, “When it comes to my husband, I will say, I am definitely biased and for a good reason.” She further affirms, “He will never let you down.”

Sexism in the Media

While it seems like Melania is a supporter of Trump, many of her statements prove otherwise. The media portrayal of Melania has been only as a model. She is overlooked or exhibited as a trophy wife that follows what her husband says. Unfortunately, with the society that we live in, this sexism is an inherent part of how the media works. Melania had her own jewelry line on QVC as well as her own skincare line demonstrating that she has the ability to pursue her own business ambitions successfully. Fox news anchor, Megyn Kelly said, “She’s been subjected to some really staunch sexism and I’ve been really offended on her behalf.” This is why only her defenses of Donald Trump are covered. What does Melania really have to say, though?

During the Republican National Convention, Melania gave a speech in support of her husband, but reading between the lines reveals a different side.

Melania said, “His success indicates inclusion rather than division. My husband offers a new direction; offering change, prosperity, and greater cooperation among people and nations. Donald intends to represent all the people, not just some of the people. That includes Christians, Jews, and Muslims. It includes Hispanics, and African Americans and Asians and the poor and the middle class.”

Moreover, Melania campaigned for her husband in Pennsylvania and addressed the issue of cyberbullying, saying that she wanted to make this issue a big part of her role as First Lady. Melania states, “Our culture has gotten too mean and too rough.” She further says, “We need to teach our youth American values: kindness, honesty, respect, compassion, charity, understanding, cooperation.” Melania spends a good portion of the rest of her speech talking about social media and the power it holds to destroy a child’s self-esteem saying, “It is never OK when a 12-year-old girl or boy is mocked, bullied or attacked. It is terrible when that happens on the playground and it is unacceptable when it’s done by someone with no name hiding on the internet.”

The first thing to notice about all these statements is that it is the exact of opposite of what Donald Trump says. She spoke about equality and rights for all religious faiths and people from all backgrounds.  Donald Trump has based his campaign on hate against Muslims and immigrants. She spoke of American values such as kindness, respect, understanding and cooperation when Donald has been known to put down the disabled, women, and minority groups. Melania also spoke about cyberbullying when the person guiltiest of this is Donald Trump via his Twitter account. Melania has even said if there was one thing she wish her husband would stop, it would be the tweeting.

Melania has gotten a lot of heat for saying things that go against her husband. The media has criticized her for saying things like these when her own husband is guilty of many of the things she speaks out against. She has said that she disagrees with her husband many times and she has indirectly spoken out against his aggressive and condescending attitude. The media gives Melania no credit for standing up for what she believes in and being a person in her own right. But neither does her husband.

As his wife and as the First Lady, Melania can’t directly say that she disagrees with Trump and may be inclined to defend him. But she has also tried to say that she does not believe in the bullying, racism and sexism that Trump has based his campaign on. The sexism of the media has prevented her message from coming through. Media outlets tend to focus on how she is simply Trump’s wife instead of treating her as her own person with her own views.

What is more telling is that while Melania is in New York supporting her son Barron, Ivanka Trump will be taking over First Lady duties. This is only one example of Trump acting as if Melania does not exist and believing his daughter Ivanka is more of an advisor than his own wife. The media’s portrait of Melania has been reinforced by her husband’s own behavior and the advisors that surround him. Any other First Lady would be given a press advisor and a team of people to mold her image for the press and even come out and defend her from attacks. As Donald Trump has been focused on his transition team, Melania has been abandoned to her own devices as if she doesn’t matter.

Melania Trump will eventually move into the White House and replace Ivanka in the Office of the First Lady,  but will the media or Donald Trump himself ever treat her like the First Lady?