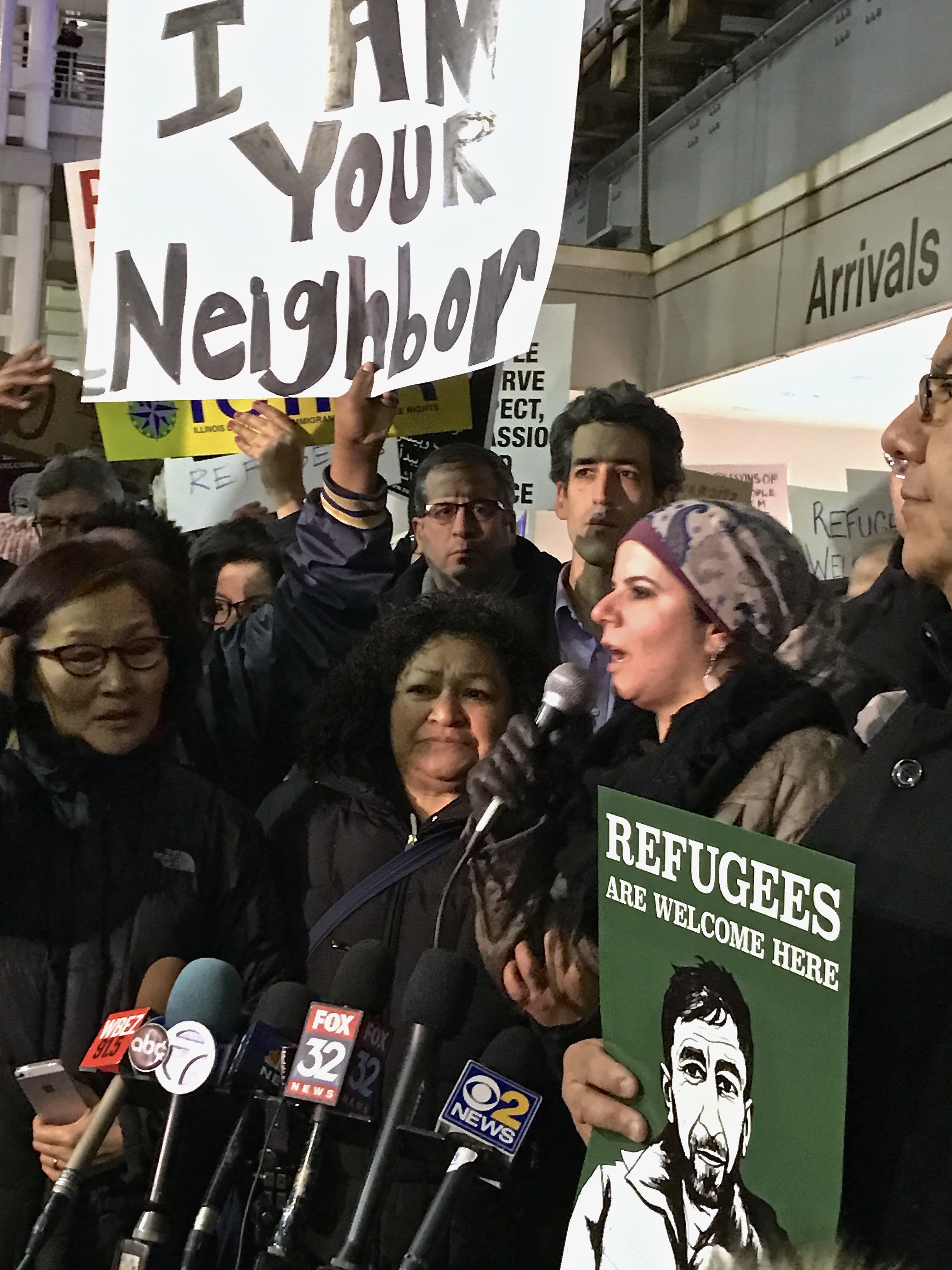 Three thousand protestors of the Trump #MuslimBan of travel from seven Muslim-majority countries shut down the operation of the International Terminal at Chicago O’Hare Airport until all detainees were released.

Yesterday evening a press conference and five-hour protest was held to resist President Trump’s Executive Order called “Protection Of The Nation From Foreign Terrorist Entry Into The United States” that placed a 90-day block on entry to the US from citizens from Iran, Iraq, Syria, Yemen, Sudan, Libya and Somalia. It also suspended the admittance of all refugees to the US for a period of 120 days, and terminates indefinitely all refugee admissions from Syria. All seven countries on this list are Muslim majority countries.

A total of 16 people were detained under the order for several hours at O’Hare before being released by 10:30 p.m., according to immigration attorneys at the airport. The attorneys, many from the International Refugee Assistance Project, had set up in the terminal all day waiting for relatives of those detained to seek them out for help. 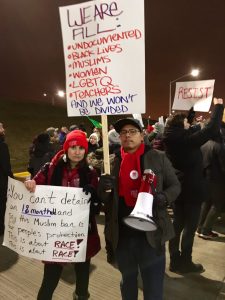 The release came for the detainees at O’Hare after pressure from lawyers, protestors, and a federal judge issued an emergency order, temporarily barring the U.S. from deporting people from nations subject to the ban. After the ACLU and other groups petitioned on behalf of two Iraqi men detained at JFK Airport, Judge Ann Donnelly of the federal district court in Brooklyn ordered an emergency stay, blocking the deportation of any individual currently being held in airports across the United States. The stay only applies to those in the air or detained at airports immediately after the executive order was signed. Later there were also similar decisions by judges in Virginia and Washington State.

All the decisions are temporary and only apply so far to people already in airports or on planes to come here yesterday. There are hundreds, thousands more that these decisions do not help.

President Trump’s signature on the #MuslimBan executive order has taken the Islamophobia he made mainstream during the presidential campaign and made it into US immigration and refugee policy.

Hatem Abudayyeh of the AAAN emphasized the refusal of allowing Muslims and Arabs from the seven countries only makes the communities here even more a target of hate crimes and with the crowd chanted “all must be immediately released Now!”

Suzanne Akhras Sahloul from the Syrian Community Network and representing ICIRR questioned where were our Illinois politicians opposing this ban. “Governor Rauner needs to say all refugees are welcome here.”

Ahmed Rehab from CAIR-Chicago got one of the biggest cheers from the crowd reminding them of Trump’s failed campaign stop  “Welcome to Chicago, the city that banned Trump!” He also indicated that CAIR as a national organization was filing suit against the executive order on Monday.

Ramirez-Rosa said he was proud to represent many of those who were targeted by these attacks on immigrants including Latinos, Muslims, and Arabs. He declared, “Let my people free!”

The protest occupied the street in front of the terminal and moved inside to continue until all detainees were freed.

There is no estimate at the number of detainees still remaining at US airports.

The same coalition of groups is planning a second day of protests at the International Terminal at O’Hare Airport tonight.