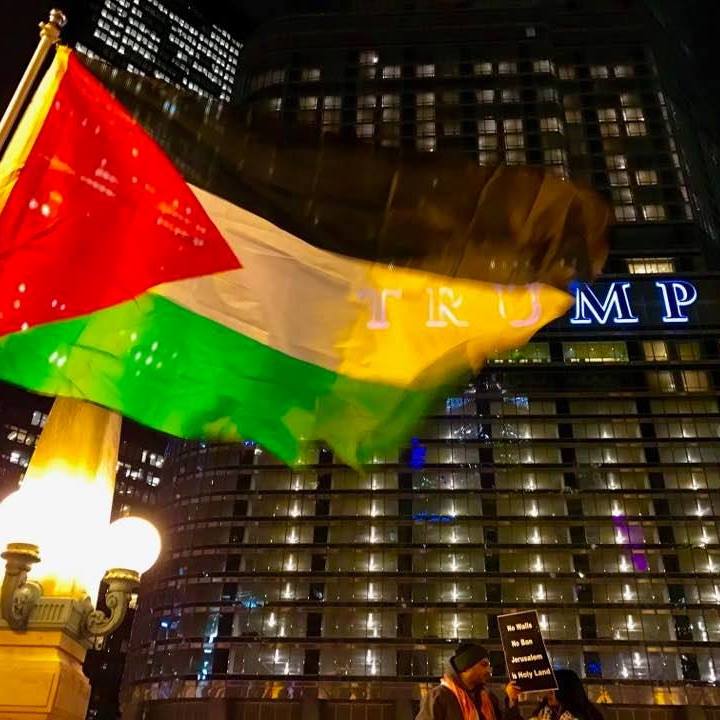 Three hundred Chicagoans rallied and marched to Trump Tower last night to protest the meeting of Israel’s Prime Minister Benjamin Netanyahu with President Trump. The protesters represented human rights and immigrant rights groups as well as Muslim, Christian, and Jewish organizations. The message of the speakers and their supporters was to clearly draw the connection between the anti-immigrant, anti-Muslim, and pro-Israel policies of the Trump administration and the goal of Netanyahu to continue to deny Palestinians their human rights.

Tarek Muhammad Khalil from the American Muslims for Palestine noted the movement across the US protesting Netanyahu’s visit. “This is not only happening in Chicago. Actions are being taken throughout the country – Boston, New York, Los Angeles, Sacramento.”

He noted that at the press conference earlier that day “Donald Trump reaffirmed the so-called unbreakable bond and the shared values as we know them to be, the shared values of racism and hate.” Netanyahu clearly stated his conditions for a Palestinian state –  Palestinians are to recognize Israel as a Jewish state and for Israel to maintain total security control of the entire area of the West Bank. Tarek pointed out that these conditions  would mean “we must maintain the occupation, continue to build settlements, and the Palestinians must recognize our right to do so.”

Dr. Kaiseruddin representing the Council of Islamic Organizations of Greater Chicago (CIOGC) compared Netanyahu with Trump in describing Netanyahu as being one of the “most unjust persons in the world…Not just Muslims say that, Christians and Jews are also saying that. Donald Trump throughout his campaign proved he is equally unjust and will be oppressive against minorities whether they are Latinos, Muslims, African Americans, or any of the minorities. We don’t care if Netanyahu and Trump are standing together. There are millions of Americans standing against them.”

Lisette Castillo representing PASO (Proyecto de Acción de los Suburbios del Oeste) West Suburban Action Project provided the connection between the Palestinians experience and that of Latinx immigrants coming to the US. “Displacement when people arrive in this country in the form of deportations and raids and family separations. Our communities are targeted every step of the way. So we stand in solidarity with the Palestinian and Muslim community and to fight for the respect of their communities, their homes, their families, here and in Palestine and in whatever other countries communities here may be from.”

Eli Massey from Jewish Voice for Peace (JVP) – Chicago emphasized the importance on intersectionality of all issues in social justice work. “To be committed to social justice means to consistently standing up for those values. One cannot attend a protest against Trump’s Muslim ban on Monday and be conspicuously absent from the Palestine protest on Tuesday and claim to be an agent for social change.”

As so many protests have focused only on Trump and his policies, Eli Massey reminded everyone that settlement building in Palestine had been going on long before Trump took office. “We must remember we are resisting far more than Trump or even the Republicans. When we fight for justice in Palestine we are defending the sacred bond between indigenous people and their land as we do when supporting the Water Protectors in Standing Rock.”

Bringing home the fight for Palestinian rights, the connection comes back to the police in Chicago. “When we fight for justice in Palestine, we are opposing militarism and state violence whether it’s perpetrated by an IDF soldier in Al-Khalil or a cop in Chicago.”

Don Wagner from the Friends of Sabeel, a Christian Palestinian group, described the “great peace deal” described by Trump in the press conference as just “another settler colonial Zionist plan to ghettoize and delegitimize the Palestinians.”

The marchers stopped in front of the Trump Tower with Palestine flags waving and continued with statements from Claudia Lucero Soto from Alianza America, Suzanne Akhras from the Syrian Community Network, Zaher Sahloul from the Syrian American Medical Society, Vivian Khalaf a Palestinian attorney from Khalaf & Abuzir, LLC, Rahef Awadallah Alkouk from the US Palestinian Community Network, and Abdallah Altamimi from the UIC Students for Justice in Palestine.

In a press conference earlier in the day, Trump had extolled “Israel as a symbol to the world in the face of oppression and an open democracy in the face of violence.” He continued saying that Israel needs security “against people who don’t value human life…America and Israel value all human life. The US will fight the isolation of Israel and is against all boycotts of Israel.”

Netanyahu responded by saying we “appreciate you treating Israel fairly in the international forum and that all slander and boycotts will be resisted by the US.” Both Trump and Netanyahu affirmed their opposition to the world-wide Boycott Divestment Sanction (BDS) movement and its goals to end the occupation of Palestine and support Palestinian human rights.

The Palestinians only referred to at the press conference by both Netanyahu and Trump as “teaching their children to hate Israel from a young age” and “who need to give up their hate” was far from the Palestinians described by the protestors. Those were the indigenous people of Palestine who have been oppressed for over 60 years and continue to fight for self-determination and their basic human rights.