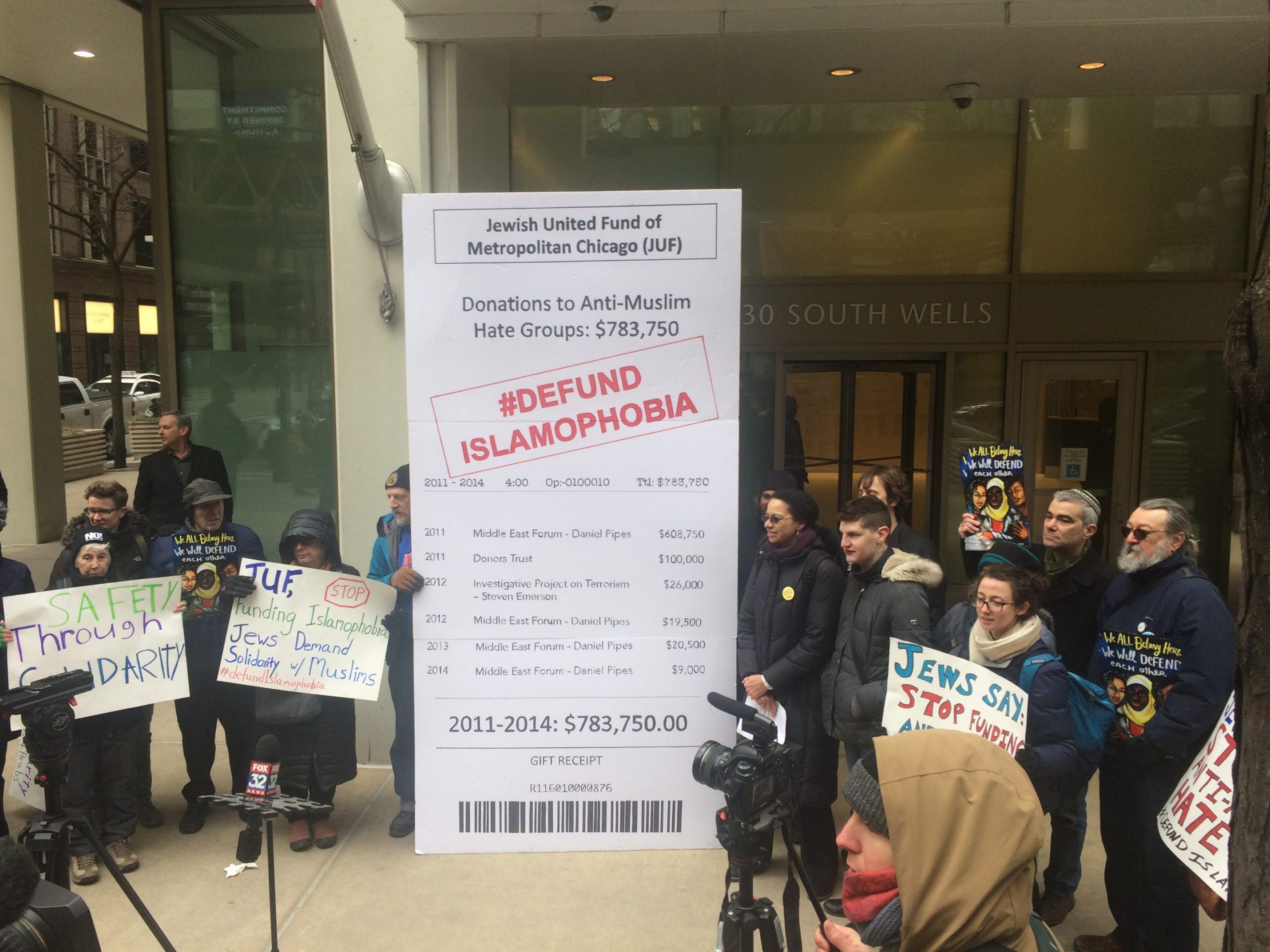 This morning at a press conference held in front of the headquarters of the Jewish United Fund of Metropolitan Chicago (JUF), Jewish Voice for Peace – Chicago (JVP-Chicago) called on the JUF to cut ties with anti-Muslim hate groups. The just released JVP-Chicago report reveals over $700K in donations from the JUF to Islamophobia network groups from 2011-2014.

The JUF is a not-for-profit social welfare and advocacy organization for the Jewish community and for Israel. They have already come under fire for their failure to denounce President Trump’s appointment of Stephen Bannon, who ran the anti-Semitic website Breitbart News, to the role of White House Chief Strategist. This appointment was widely celebrated by white nationalists, who see it as an extension of the racism, Islamophobia, xenophobia, misogyny, anti-LGBT bigotry and anti-Semitism that were all elements integral to Trump’s campaign.

These organizations are members of what the Southern Poverty Law Center describes as a “group of propagandists…at the center of what is a large and evolving network of Islam-bashing activists” which spreads the Islamophobic ideologies that enable promotion of anti-Muslim policies such as the current administration’s desired Muslim Ban.

Representatives of this “Islamophobe Network” has also been involved with multiple figures in the Trump administration including Stephen Bannon and Stephen Miller who developed the Muslim Ban; Kellyanne Conway with Steve Gaffney’s Center for Security Policy; CIA Chief Mike Pompeo with the anti-Muslim group ACT for America; and Attorney General Jeff Sessions who has won awards from both the Center for Security Policy and the anti-Muslim hate group David Horowitz Freedom Center. At a time when both anti-Muslim and anti-Semitic acts have risen since the election of President Trump, the JUF support for these same anti-Muslim organizations is a complete contradiction to the prominently displayed slogan on their website “Together for Good.”

In its report, JVP-Chicago calls on the JUF to:

“In a time when working together to challenge hate and discriminatory policies is more important than ever, these financial ties show that the JUF’s priorities lie elsewhere,” said JVP-Chicago member Lesley Williams.

As a Black Jewish woman I am outraged, although not surprised, by the JUF’s funding of such racist organizations, and I hope that all members of the Chicago-area Jewish community who believe in solidarity with marginalized communities will join us in calling on the JUF to end its financial ties with groups that target Arab, Muslim and Palestinian communities.

Daniel Pipes, whose Middle East Forum received over half a million dollars from JUF funds, has also described acceptance of transgender people as a sign of “a civilization in decline.”

Stephanie Skora, JVP-Chicago: “The JUF’s contributions to anti-Muslim, anti-queer, and

anti-trans hatemongers speaks volumes about who they think belongs in the Jewish community. Clearly it is not people like me, or other queer and trans Jews. Their cowardly exporting of virulent homophobia and transphobia, so that their bigotry can be spouted through the likes of Daniel Pipes is yet another nail in the coffin to the JUF’s claim that they represent all Jews. They can’t even pretend to care if Jews like me live or die.”

The JVP-Chicago report closes by describing how the JUF, the Middle East Forum, and the Investigative Project on Terrorism share a common agenda of defending the State of Israel’s repressive policies towards Palestinians. JUF’s relationships with groups that dehumanize Arabs and Muslims must be understood in the context of its own agenda to justify Israel’s brutality toward Palestinians. As outlined in the report, JUF President Steven Nasatir has asserted that Palestinians “revel in destruction” because of their “vile, extremist Islamic ideology.”

“The JUF has never legitimately supported the rights of oppressed people, despite their claims,” said Hatem Abudayyeh of the U.S. Palestinian Community Network. “Instead, they have historically spewed Zionist propaganda; been apologists for Israeli crimes; and supported military attacks on Palestinians and Arabs in our homeland, as well as racist, political attacks on Palestine support organizing in the U.S.”

JVP–Chicago is the local chapter of the national, grassroots organization that works for a just and lasting peace according to principles of human rights, equality, and international law for all the people of Israel and Palestine. JVP has over 200,000 online supporters, over 60 chapters, a youth wing, a Rabbinic Council, an Artist Council, an Academic Advisory Council, and an Advisory Board made up of leading U.S. intellectuals and artists.

JVP-Chicago plans to follow up on their report by reaching out to other organizations and individuals in Chicago’s Jewish community, in particular funders, grantees and others officially affiliated with JUF in any way to urge them to pressure the JUF to stop supporting anti-Muslim and anti-Arab organizations.