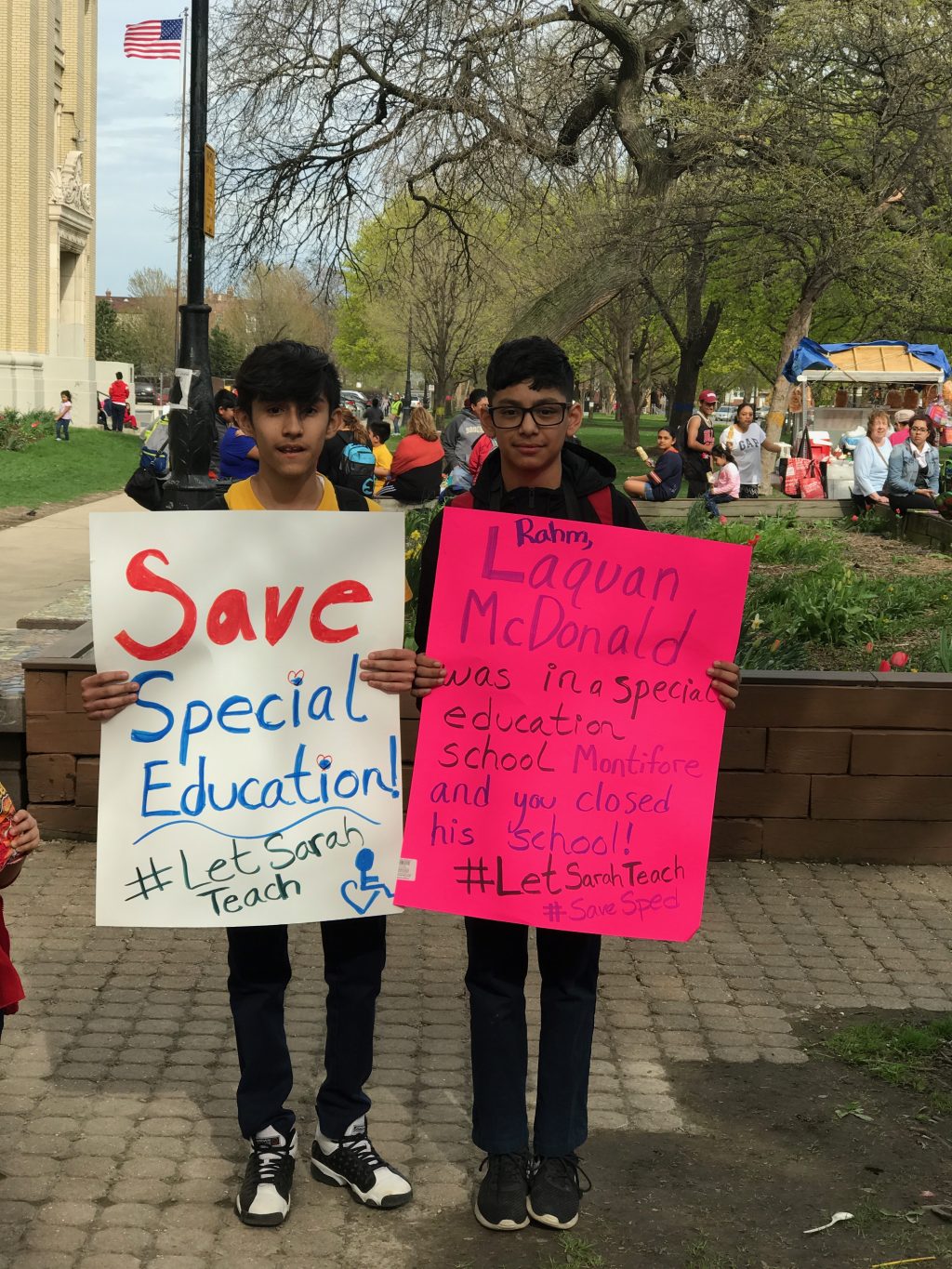 The chants of the students

“We want Chambers, we want books. We want the money Rahm took!”

reflected their demand that Chambers be returned to her special education classroom at Saucedo Academy in Little Village. She was suspended with pay by the Chicago Public Schools (CPS) twelve days ago. Her suspension is pending a hearing before an Illinois State Board of Education hearing officer. No hearing has been scheduled but CPS claims they are moving toward a dismissal hearing.

Likely fearing she would continue to organize with the CTU against her dismissal, CPS has restricted her from being on any school property. CPS has not spelled out the allegations against her, but they indicated to the CTU that it is related to the PARCC state standardized test. Although a hearing on these issues can be held quickly, it appears that CPS is purposely delaying the hearing to near the end of the school year so her case will gain less publicity. If she loses the case, she would not be able to teach anywhere in the Chicago Public School system.

Chambers is co-chair of the CTU’s Special Education Task Force and has been leading the campaign to stop CPS from cutting special ed funds and resources to schools. Saucedo Academy was already down two special education teachers.  In the last couple months, she fought a mandated sharp increase of her special education student load because of the negative impact on their education. Previous years, she has also lead the fight against unnecessary school testing especially given the extreme anxiety it causes many special ed students. In one infamous case, she talked about one student who pulled their eyelashes out from the stress. She had emphasized these tests not only do not benefit special education students, but the lengthy preparation time takes away from the true education time they should be getting. She also founded the first Gay-Straight Alliance (GSA) club at Saucedo providing a place for LGBTQ students to feel safe and fight for their rights. Chambers was under pressure from the school administrators to shut the club down even though it followed state guidelines of setting up GSAs.

“There’s an attack against me, because I’m an outspoken union activist, and especially an outspoken special education advocate. They cut special education by $80 million at least this year alone, and it’s really hurting our students,” Chambers said. “I’ve spoken at the Board of Education, and brought parents and students to speak there. Frankly they want teachers to be silent. They want them to follow their orders. I will not be silent, because it hurts my students with disabilities.”

After she returned from a Spring Break trip to Brazil on the invitation of a UN representative to visit classrooms and meet with teacher unions, Chambers made this statement on the first day of her suspension. 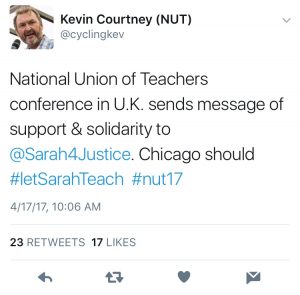 Even before the press conference and rally, Sarah Chambers was getting support from unions across the country and the world. The 330,000 member National Union of Teachers conference in the UK sent a message of support and solidarity to Sarah Chambers.

The CTB (Central of Male and Female Workers of Brazil), one of the largest unions in the country with 9 million members, provided a support statement that read in part

“The CTB, the class-oriented trade union movement in Brazil expresses its full support to Sarah Chambers, who is a victim of a “witch hunt.” Sarah is a distinguished, award winning Special Education teacher…who has been a vocal detractor of the policies at the Chicago Public Schools.”

During the day of the rally, the hashtag #LetSarahTeach had 6.5 million views.

But the most important and heartfelt supporters were current and former students and parents who were there as one said to support “one of the best special education teachers in the school.”

Iris Gervacio, former Saucedo special education student, was the MC for the rally and introduced each of the speakers. On her part, she emphasized the school’s continuing need for additional resources and staff.

“I am appalled by the allegations floated around that seem to be the basis for the Chicago Public Schools wanting to make her an example because she does a good job standing up for her fellow teachers and she is a proud member of the Chicago Teachers Union. I have had first hand experience seeing her work as an outstanding educator and someone who truly respects and embraces the community she teaches in and one who is not afraid to be an advocate for public education and especially for the rights of students with disabilities. She should be brought back as soon as possible so she can resume the passion of her life which is to be an excellent teacher in the Chicago public schools.”

Rodrigo Anzures-Oyorzabal, from the Illinois Safe Schools Alliance, a group that works to support inclusion of LGBTQ students in schools, spoke of Chambers being a supporter of LGBTQ students at Saucedo and followed all of their guidelines in setting up the school’s gay-straight alliance (GSA) group. “We find it really disheartening that Sarah would be targeted and disciplined at a time when LGBTQ students should be affirmed, supported and lifted up more than ever.”

Crystal Rosas, an eighth-grade student at Saucedo, reflected the feelings of many of her students when she said that Chambers always goes above and beyond for her students “because she believes we are the best.”

Rod Estavan from Access Living, an advocacy organization for the disabled, emphasized Chambers being tireless in the fight for her students’ rights. “She has defended the rights of children to receive their appropriate services under federal law. We want her back in the classroom. Even more upsetting to us, is right now in that building there is an empty seat where she should be teaching. There is no one teaching those children except an unqualified substitute. We see this over and over again in this city, there are empty positions all over the place. Every one of those empty positions is money for the Board of Education because the substitutes don’t get paid as much. It also discourages young teachers from working for this district.”