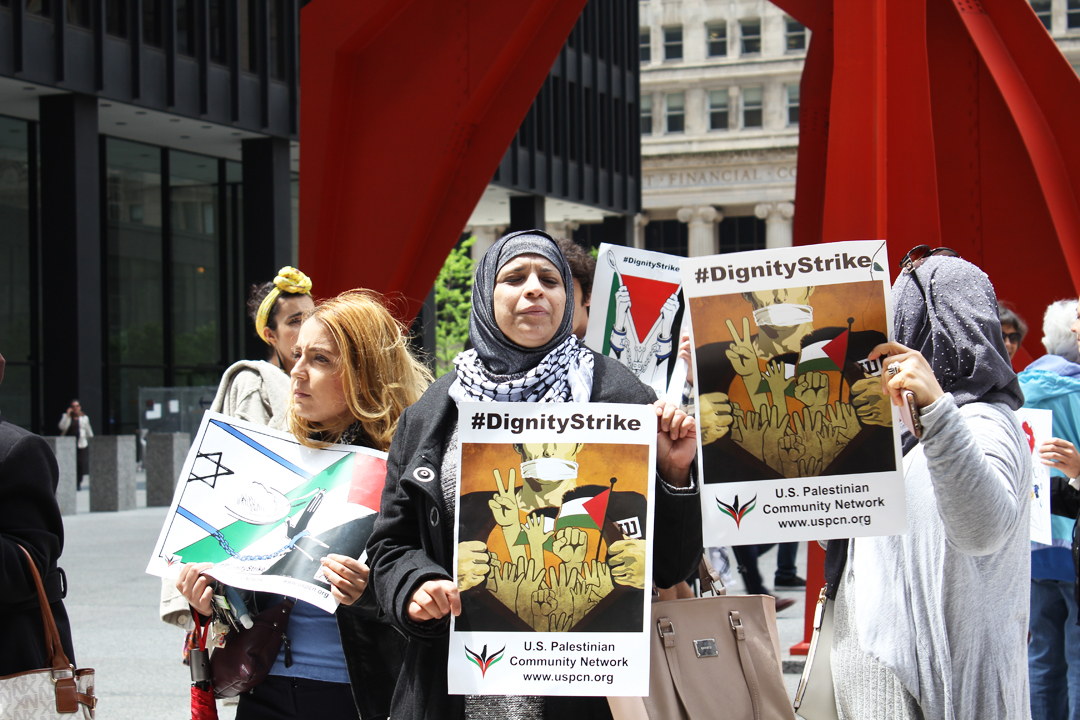 THE LOOP, CHICAGO — At approximately noon today, “we want justice, you say how? Free Palestinian prisoners now; we will fight, day and night, to support the hunger strike” rang throughout Federal Plaza on Dearborn.

A group of supporters—including the U.S. Palestinian Community Network, Jewish Voices for Peace, and others—rallied outside of Senator Durbin’s office to advocate for the Palestinian prisoners’ hunger strike demands for basic human rights.

The protest was organized in conjunction with a group of community leaders who were scheduled to speak directly with Senator Durbin’s office about bringing the issue to Congress, as well as an effort to bring more public media attention.

Although there have been efforts to spread awareness through social media (e.g., the hashtag #DignityStrike and the Salt Water Challenge), there is a significant lack of media coverage on this issue, according to organizers. Aside from an op-ed piece on the New York Times last month and another in Newsweek, mainstream media outlets are largely turning a blind eye to the human rights violations–and the thousands of Palestinian political prisoners who have to endure them.

The mother of one of the #DignityStrike hunger strikers holding photos of her son who has been imprisoned for years. #DignityStrikeChi pic.twitter.com/obvrYiCagY

Entering into the seventh week (Day 39) of the hunger strike, the over 1,600 political prisoners currently participating in the hunger strike are facing deteriorating health conditions after only consuming water and salt since the beginning of the strike in April.

The prisoners have listed concrete demands for Israeli prisons, some of which include public telephone services, increased family visits, basic medical care, women prisoners’ rights, humane treatment during transportation, and education for prisoners who have not yet graduated high school. They have stated that they will not stop until demands are met. They are also demanding the end of solitary confinement, which the UN cites as a form of torture if exceeding 15 days. Moreover, important to note is that Israeli military courts have nearly a 100% conviction rate for Palestinians — including Palestinian children.

With the rising stakes and state of emergency, community leaders in Chicago have called the U.S. and Israeli government to action. One leader spoke at the protest, “it is important to know that all these demands are enshrined in international law and are legally obligated to be given to the Palestinian prisoners by the Israeli prison services and that is why we are striking and that is why we are here today.”

There is yet to be a response from the Senator.