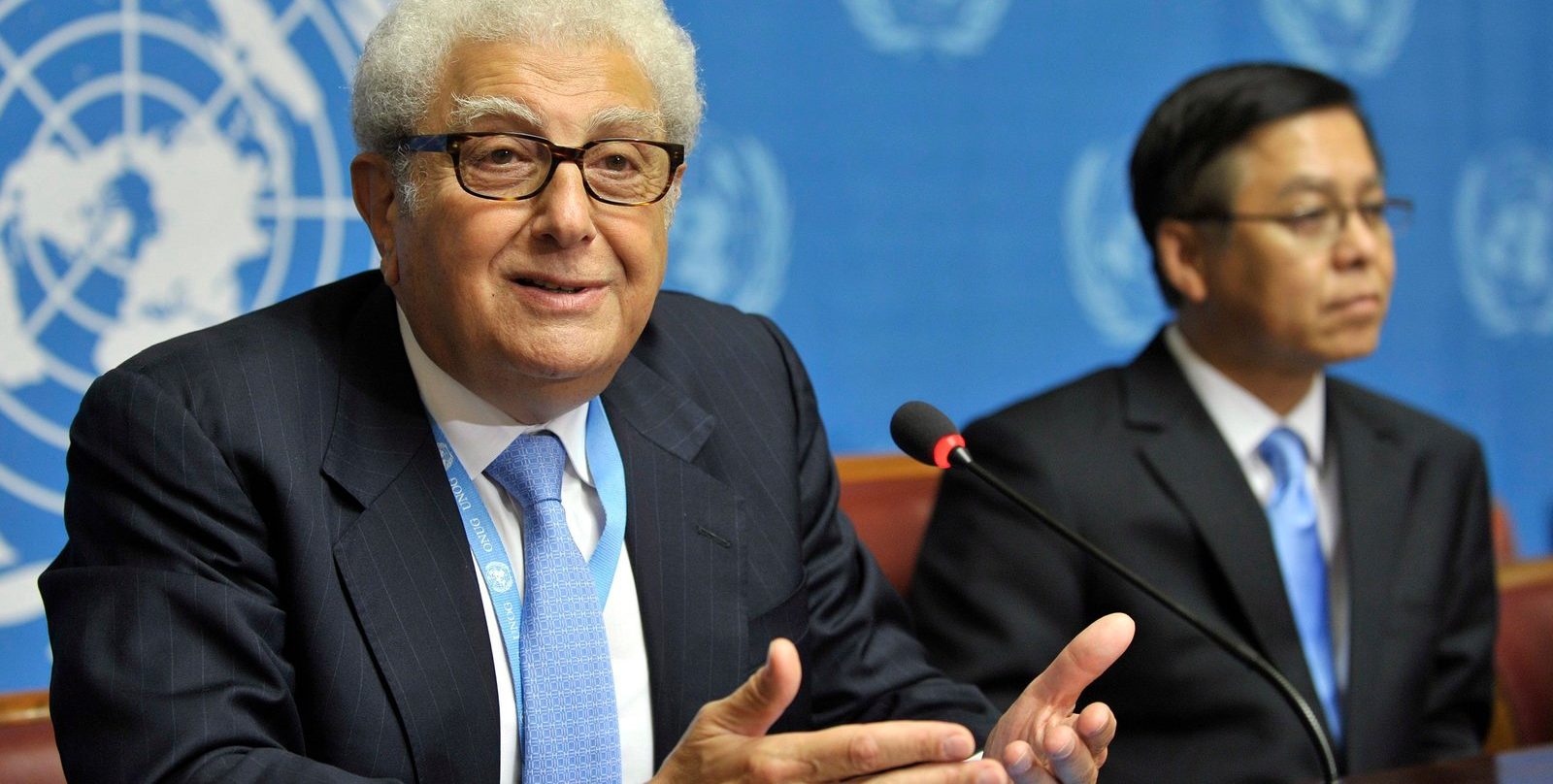 It is with great sadness that I reflect on the passing of Professor Mahmoud Cherif Bassiouni, an early supporter of CAIR-Chicago, three-time annual banquet keynote speaker, and honorary chair member, who transitioned at 8:40 am CST Tuesday morning, September 26, 2017, after battling cancer and related complications.

Professor Emeritus Cherif Bassiouni stands in my mind as one of the all-time greats of the American Muslim community as well as one of the greatest contemporary legal minds to ply the trade. He is considered a pyramid of human rights law and a founding father of international criminal law, the latter of which saw him fight successfully for the creation of the first International Criminal Court in the Netherlands to prosecute the most severe human rights abuses that traditionally got a political pass.

The youngest and longest serving professor at DePaul (45 years of service), he also taught at universities around the country and the world and counts among his students well-known judges, jurists, governors, mayors, public servants, and diplomats.

Throughout the course of his career, he was appointed to 22 United Nations positions, and against all odds and the heavy rebuke of the international diplomatic establishment, he defiantly racked up his personal resources and connections and set out to single-handedly investigate the war crimes in Bosnia, a monumental effort that documented mass killings, human rights abuses, 67,000 cases of rape, and resulted in the prosecution of hundreds including the top man, Milosevic. At a ceremony honoring him at the Bosnian Islamic center, he gave them his grandfather’s prize possession, the Kiswa (cover) of the Kabba, and it still hangs there on their wall. 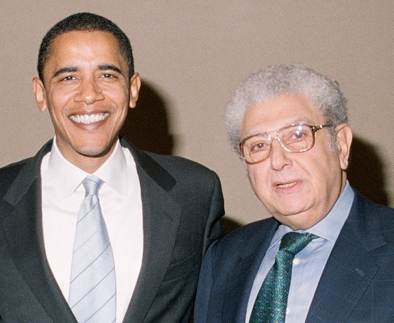 Bassiouni, the author of 35 books, the editor of 45, and the author of hundreds of scholarly articles has left such an indelible mark on his discipline that it would be difficult for a student of international criminal law anywhere in the world not to have been assigned one of his works on the path to graduation.

He was the founder and president of three international human rights law institutes, in the US, France, and Italy.

A studious man who received his education in his native Egypt, France, and the US, he had a near photographic memory, and was known for the incredible clarity of his thought process and analysis, as well as verbal communication.

But beyond the special gift of mind, Bassiouni bore a personality to match: tough yet charming, commanding yet compassionate, no-nonsense yet with great wit, and most of all committed, courageous, laborious, unyielding – and deeply compassionate.

He spoke seven languages fluently, and authored works directly in several of them. He had a penchant for life and was a man of fine taste. His home on Chicago’s lakefront felt like a mini museum with ancient artifacts from Rome, Greece, Egypt, and the Far East, collections of original law books and other works that were published as far back as the 1600’s, and historical Islamic texts. In his study, hung two life-size portraits of his two grandfathers, one the head of the Egyptian senate in the days of the monarchy, and the other a jurist and a leader of the resistance against British imperialism. The latter, Mahmoud Bassiouni has a street named after him in downtown Cairo, a street that was the hub of the activists seeking freedom through the uprising of January 2011. Cherif himself was given an honorary street naming in Chicago, not far from his home. His summer home had displays of some of his favorite collections including military figurines, chess boards, old rifles, and huge model ships.

Bassiouni’s efforts for human rights and his legal achievements saw him honored and awarded throughout his life. He received the highest civilian medals from several countries including France, Germany, Egypt, Austria, and Italy. He was awarded honorary citizenships from half a dozen countries and multiple honorary doctorates from several universities in the US, and Europe. His photo appears on a stamp in Trinidad and Tobago. He was nominated for the Nobel Peace Prize in 1999. His actual CV is 78 pages long by my count. 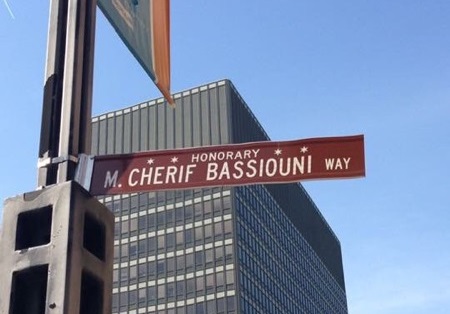 Though a larger than life figure whose role in the history, I knew Professor Bassiouni beyond the veneer and pomp as a humble, kind, and thoughtful man. I first met professor Bassiouni when I was a 21 year old graduate student at DePaul who happened to knock on his door wanting to meet him. He greeted me, a total stranger and simple student, with the courtesy of a diplomat. He smiled, made eye contact, offered me a chair, and spent as much time as I needed answering my questions about his work, politics, religion, and life, and offering me advice. I had no purpose being there, but to get to know him. He never asked me why I came or what I wanted. He let me in that day and never out. I recall a few years later sitting in the lobby of Winston Churchill’s former home in Sicily where professor Bassiouni was holding a human rights training of Arab judges under the auspices of his Italian institute, there at his invitation and not afforded any formal duties but to observe, I was mesmerized at how versatile one man could be. Switching seamlessly from speaking Arabic to his guests, Italian and French to his assistants, and German and Spanish in calls in between. And not merely language versatility, but culturally, he was truly a man of many worlds. At home in the company of kings and heads of government, as he was with student gatherings; in Islamic religious settings as in international high society galas; listening to Um Kulthum as to some of his favorite classical symphonies.

Professor Bassiouni is survived by his wife, Elaine, and his daughter Lisa and his grandchildren Szofia and Antonio. He is also survived by a band of “sons” including Mohamed Hilal, Laith Saud, Nehad el Gammal, Mohamed Abdel Aziz, Khaled Mohy, and myself. But most of all his favorite son, Yaser Tabbara with whom he had a special bond over many years.

Last night, as he lay in his bed unresponsive but breathing, we believed he could hear us, I read into his ear from the Qur’an. I opened the book and the first verses my eyes fell open read:

Verily, We have given you a manifest victory.

That Allah may forgive you your sins of the past and the future, and complete His Favour on you, and guide you on the Straight Path;

And that Allah may help you with strong help.

He it is Who sent down calmness and tranquility into the hearts of the believers, that they may grow more in Faith along with their (present) Faith. And to Allah belong the hosts of the heavens and the earth, and Allah is Ever All-Knower, All-Wise.

That He may admit the believing men and the believing women to Gardens under which rivers flow (i.e. Paradise), to abide therein forever, and to expiate from them their sins, and that is with Allah, a supreme success.

When I got home, I remembered that these were the verses that coincidentally hung on a plaque above his head in his office for 45 years, a plaque that now hangs in mine since his retirement.

I ask Allah to forgive his sins and accept his soul to the highest level of heaven, and to grant his family patience and consolation. 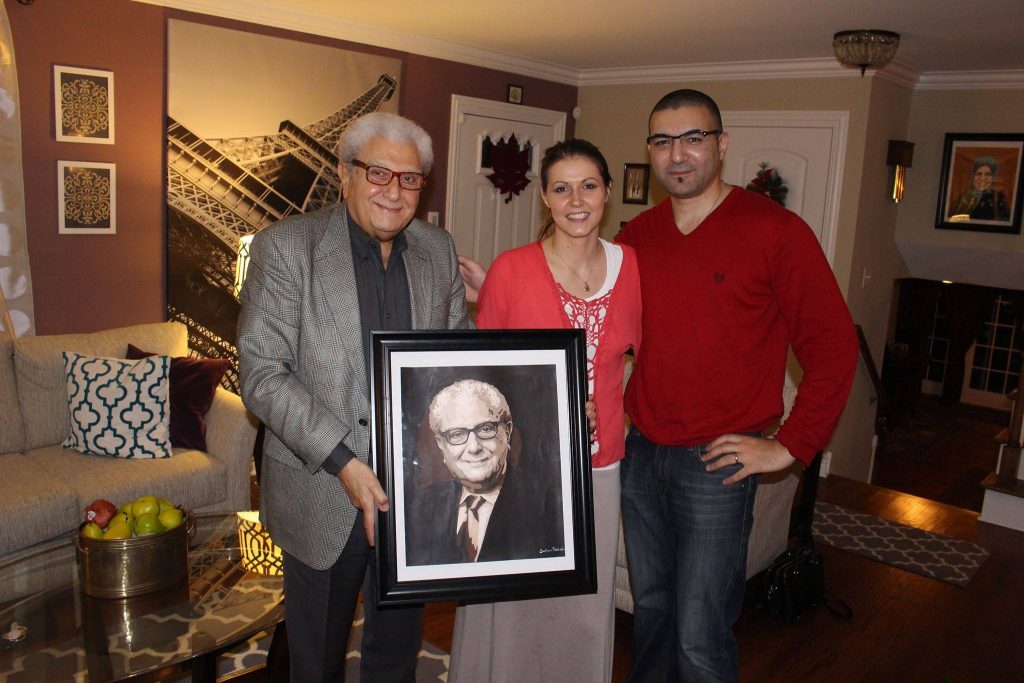 This photo is from a personal happy memory: his visit to our home to congratulate us on our first born, Mahmoud Shamsedine. He gifted him a beautiful copy of the Qur’an in a silver casing, and we surprised him with a portrait my wife, Sevi, painted of him that now hangs in his institute in Sicily.