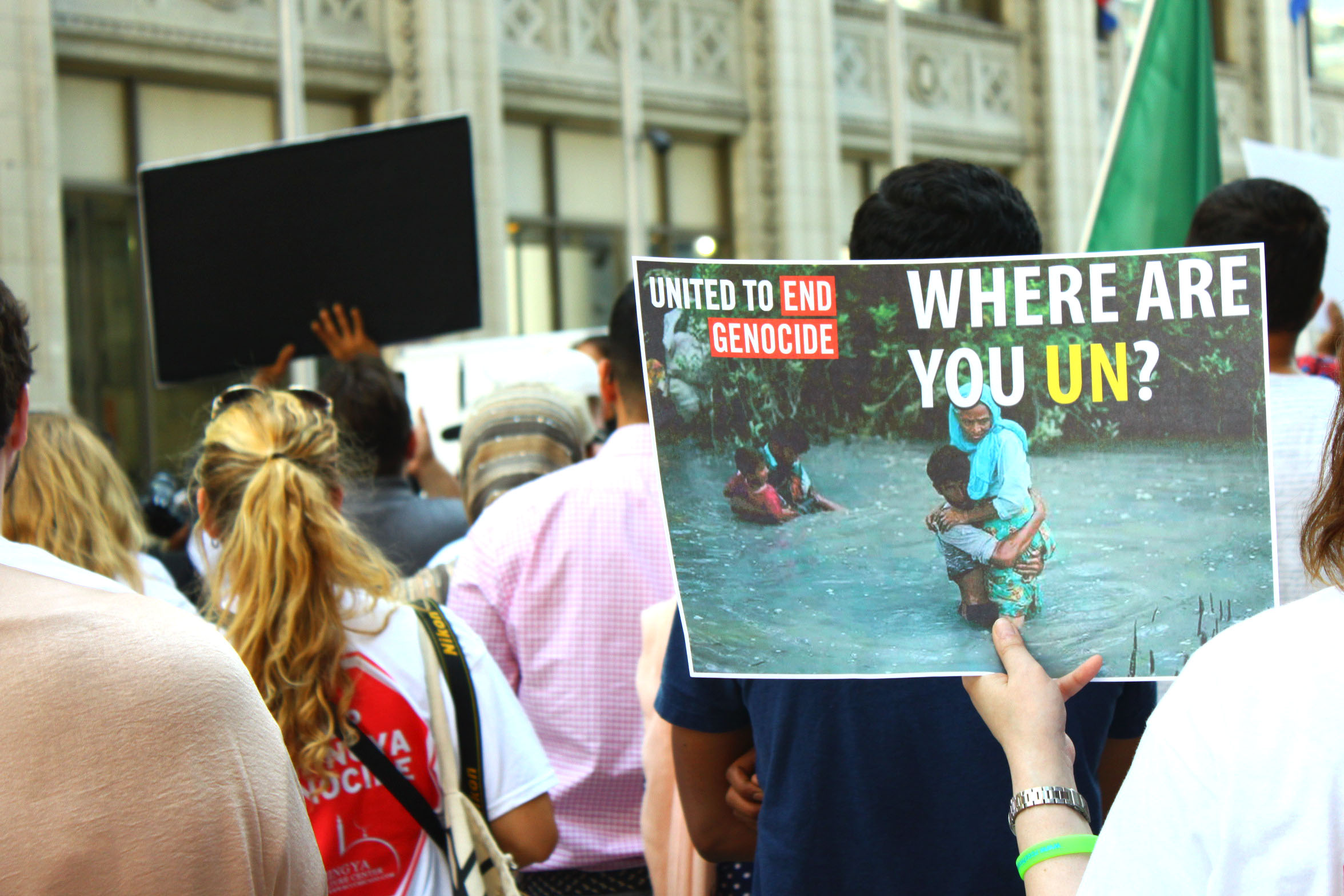 A group of passionate individuals and organizations fighting to bring awareness to a crisis very much overlooked, took to the streets of downtown Chicago on Saturday, September 23rd to address the Rohingya Muslim genocide. Lead by the Rohingya Cultural Center (RCC), members of the Rohingya community and their allies came together to share stories and support who the UN has called “the most persecuted minority in the world.” 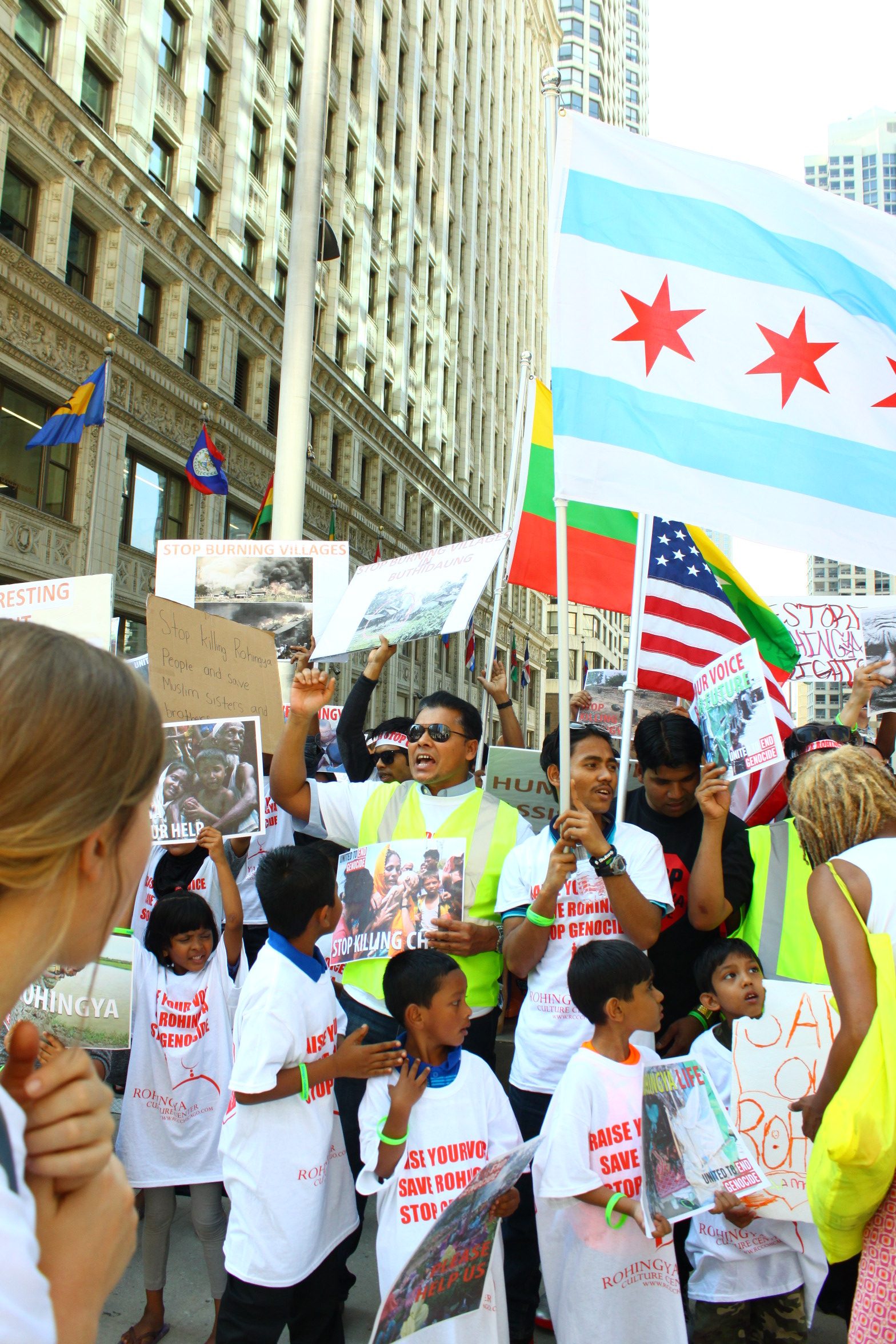 “Today, I am Syrian-American, but today, I am Rohingya just like you. I am with you brothers and sisters,” Suzanne Akhras Sahloul from the Syrian Community Network said. Akhras speaks to protesters of the struggles Syrian refugees face like those of the Rohingya and stands in solidarity. “We understand your pain and it is such a shame on the world that we are turning away and turning a blind eye.” 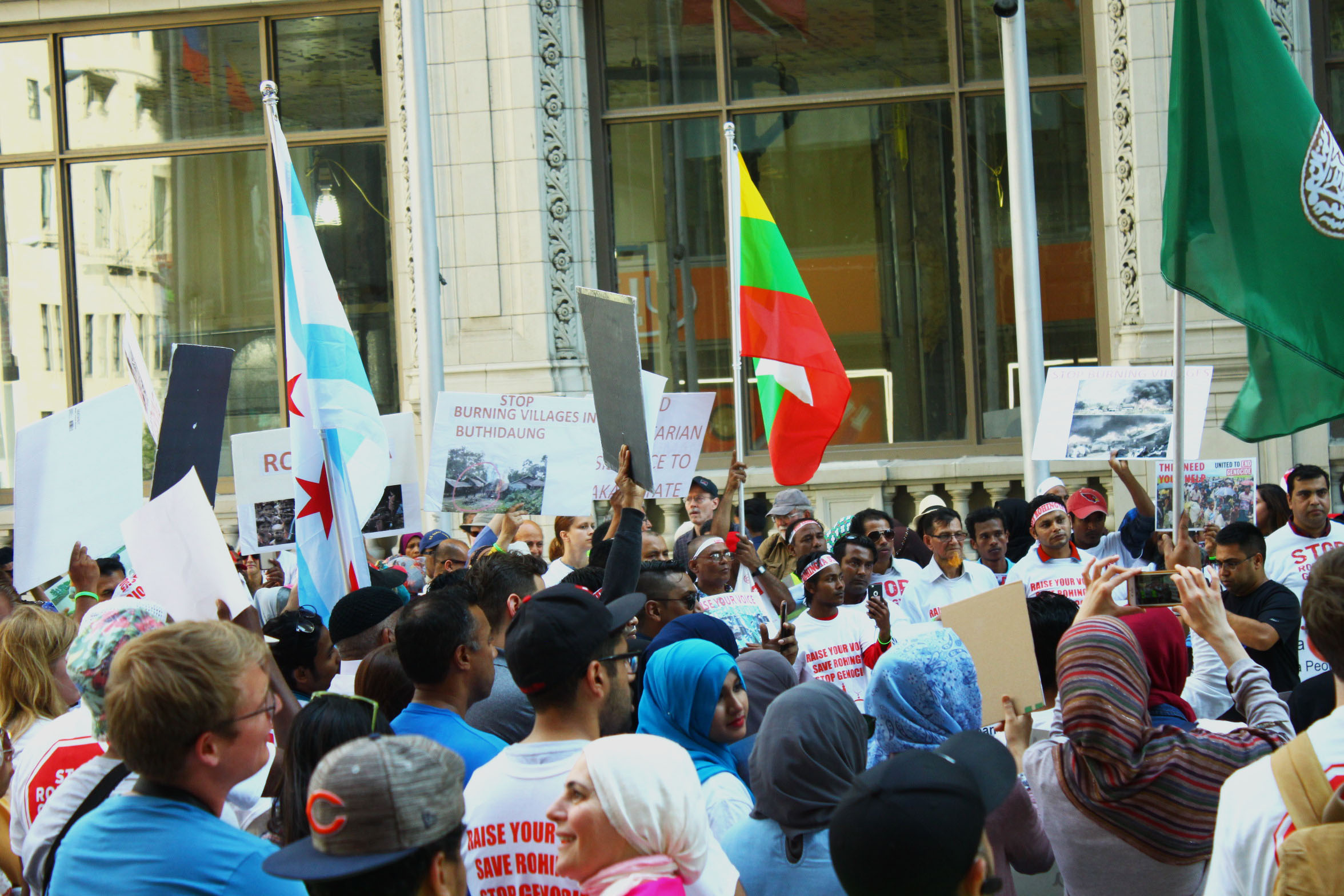 The Rohingya are a Muslim ethnic minority indigenous to Arakan, in the Rakhine State of
Burma. In the late 1700s, the Bamar, an ethnic Buddhist group, took over Burma and began projects to erase the Rohingya. As the oppression progressed, the Burmese government revoked their citizenship in 1982, further preventing them from education, employment and shelter. Riots between the Rohingya and Rakhine Buddhists led to the full occupation of Arakan by the Burmese military resulting in the burning of villages, gang rape, military executions and internment camps. 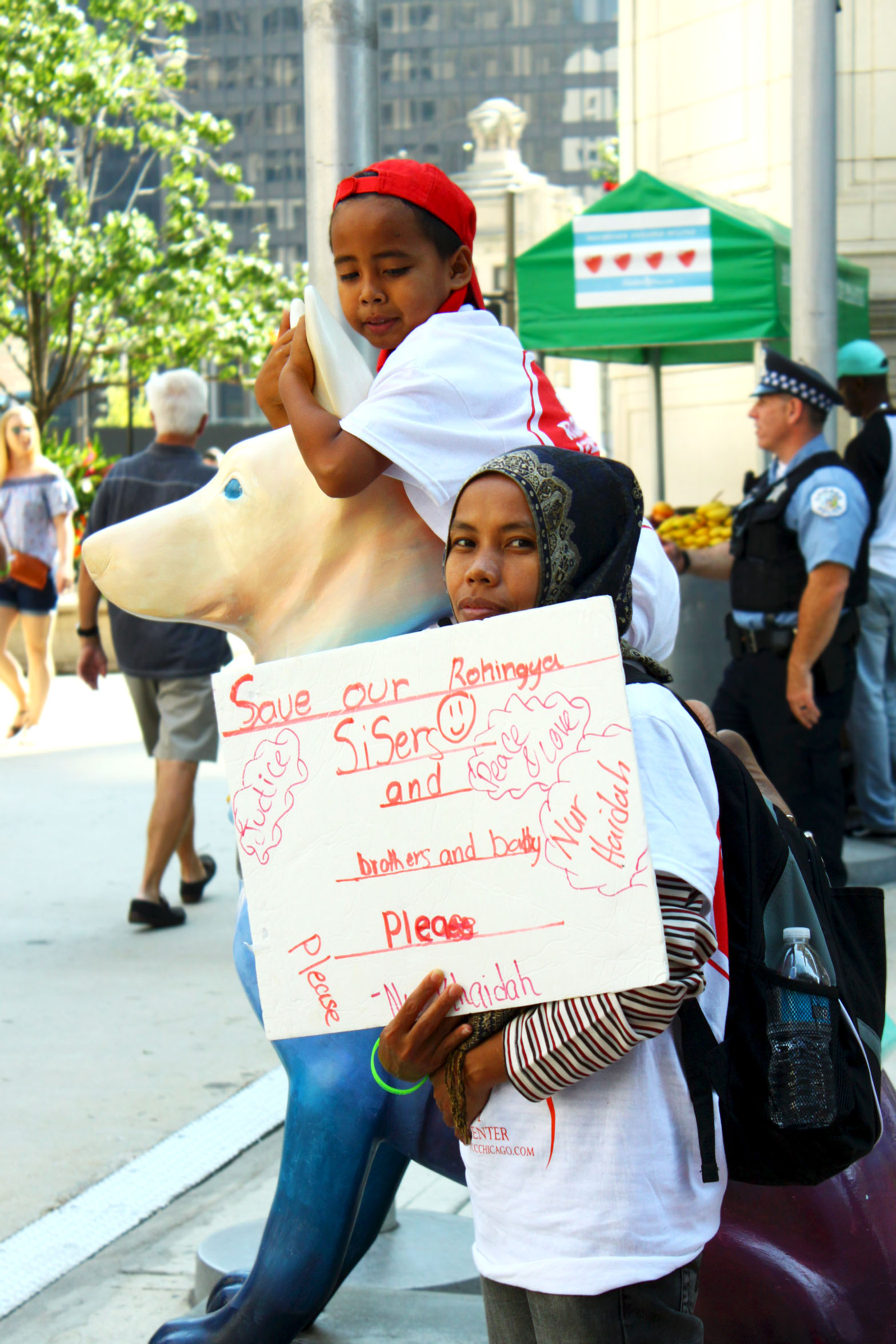 To this day, the violence and genocide continues and organizations like the Rohingya Cultural Center in Chicago fight to end the genocide and help incoming Rohingya refugees including 500 families in Chicago, over the last five years establish a new life in America.
While thousands still remain lost in jungles and in between lands, 400,000 Rohingyas fled
Burma prior to violence that started in August and since 500,00 have fled to other countries, mainly Bangladesh according to UNHCR. Since the persecution began in the 1970s, nearly one million have fled Burma out of its 1.3 million Rohingya population. 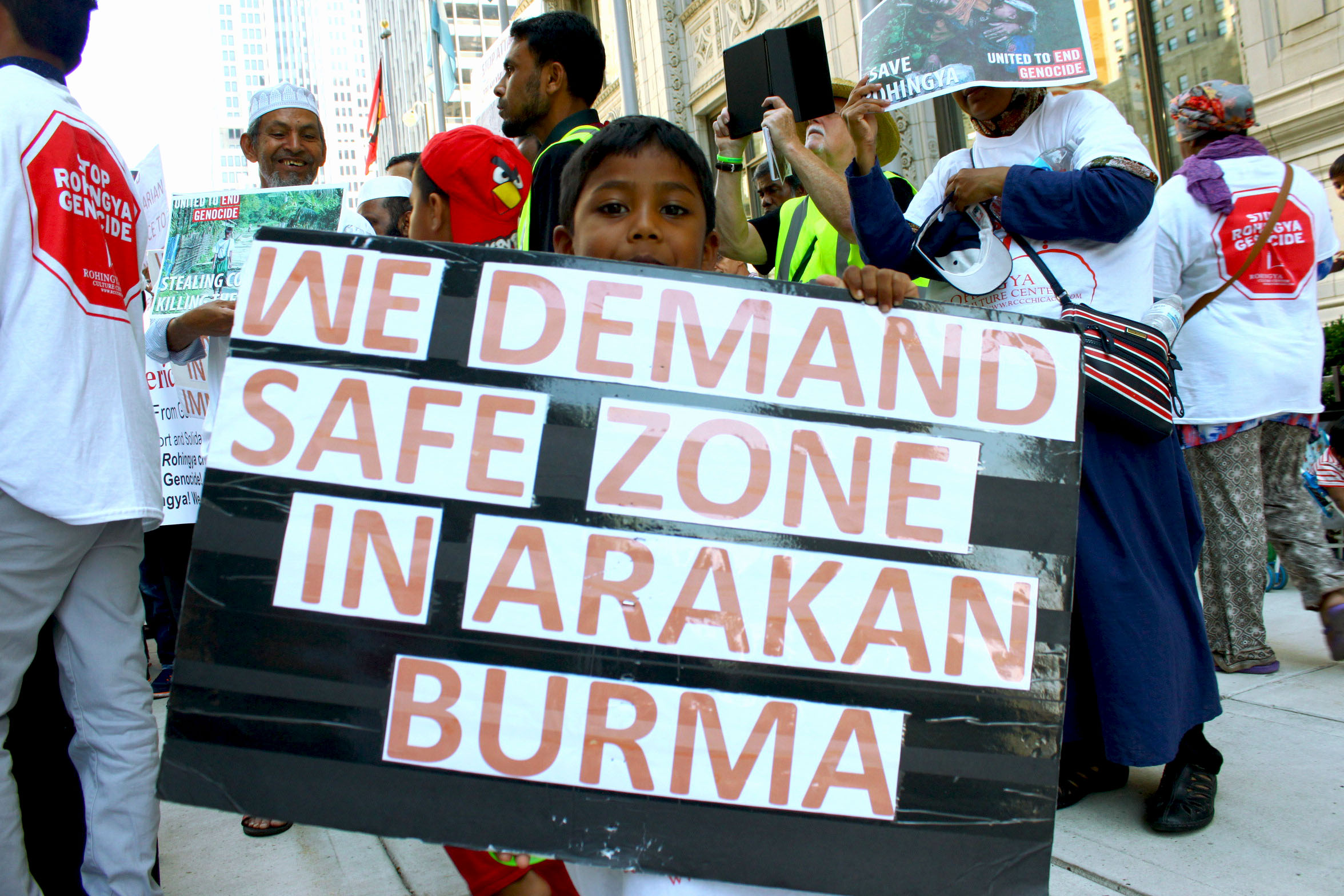 Saturday’s protest highlighted efforts to raise awareness not only for the crisis in Burma, but also for the struggles that Rohingya refugees face coming to America for asylum. Due to the dire conditions these refugees come from, many of the new arrivals are illiterate and unskilled. Author of “The Rohingyas: Inside Myanmar’s Hidden Genocide,” Azeem Ibrahim, took the stage to educate participants of what he’s seen through his research of this crisis.

“Until the recent wave of violence, there was almost no interest in this subject at all. One of the reasons why is that the Rohingya, after you get to know the issue a little bit more, are amongst the lowest of the low in terms of advocacy. There’s hardly anybody amongst them with a proper education.” 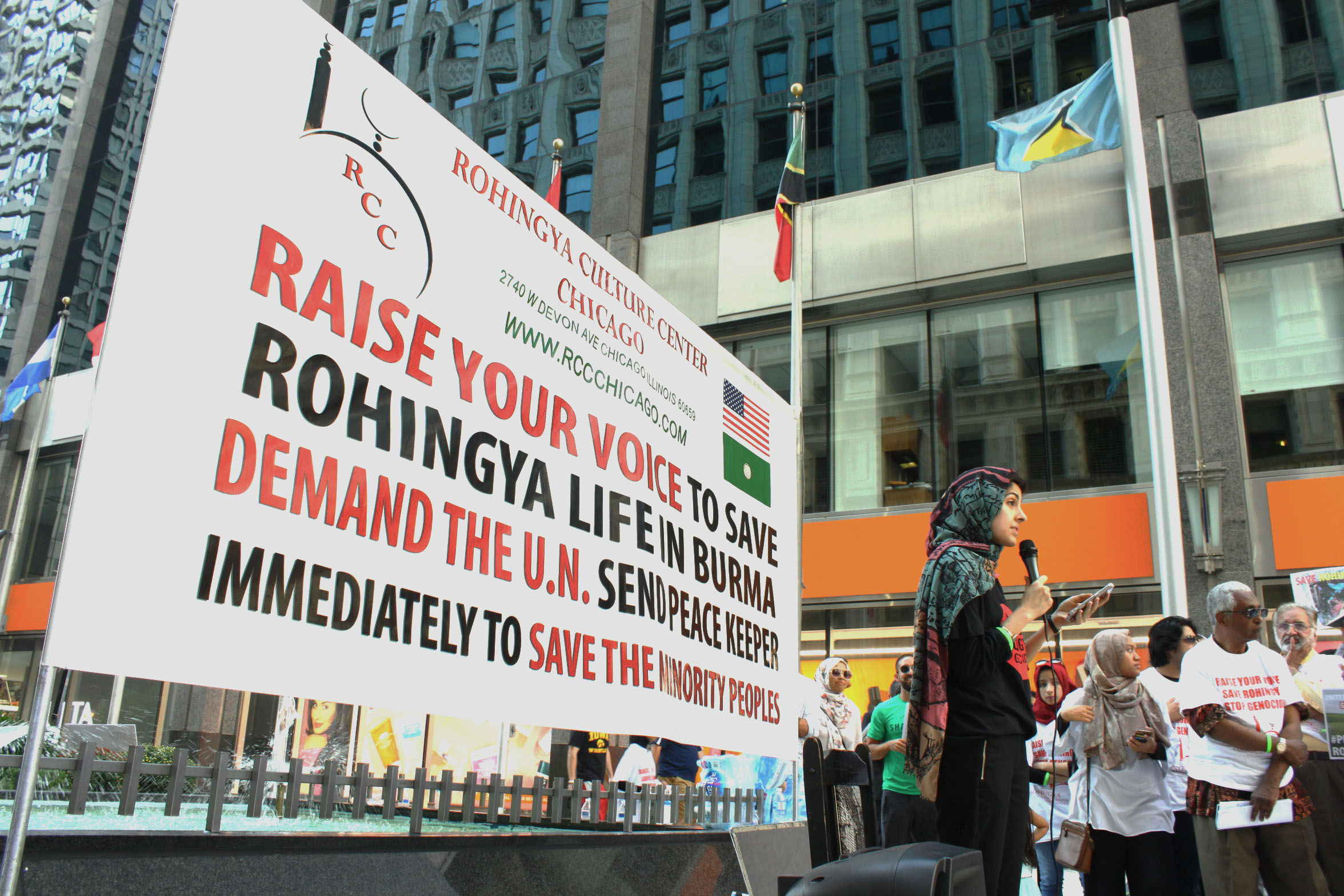 1,000 Rohingyas make their home at the RCC and seek to thank the United States for its
freedoms and safety by getting educated as one Rohingya refugee said according the Chicago Tribune.

The RCC aims to provide the support and education, as well as a community environment for refugees to build successful lives in Chicago.

The RCC has laid out political action items for citizens to help the persecuted Rohingya:

You can support Senate Resolution 250, a bipartisan resolution that condemns attacks on
Rohingyas and call for the restoration of the Rohingya citizenship.