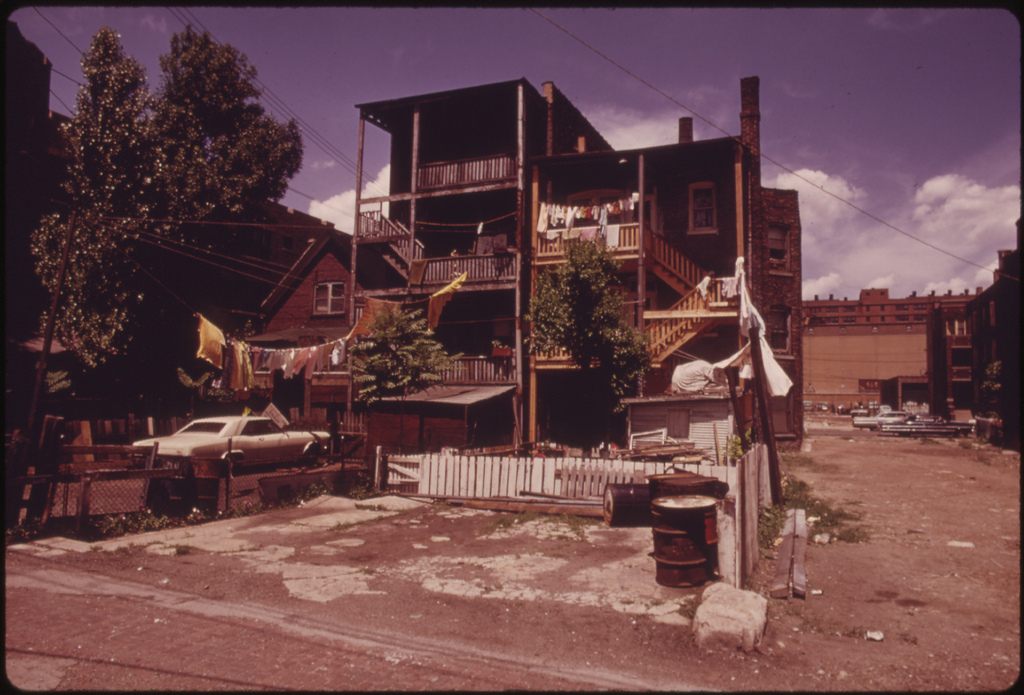 “On this corner, right here, we used to organize. Came here when we learned Cabrini was going to get torn down,” the tour guide noted, motioning towards a grassy street corner. When Harold Washington, Chicago’s first black mayor, was elected, local leader Marion Stamps remembers a major celebration in Cabrini Green – “we didn’t go down to the hotel. We stayed right here in our community, we were in the middle of the street, all night long, throwing up all the leftover literature and newspapers and anything else we could find.” The streets of Cabrini Green were once home to 15,000 Chicago residents, hosting a majority black community. Many of those who once lived in Cabrini Green remember Cabrini as if it was the center of Chicago, full of culture and religion, challenges and setbacks.

The grassy corner where protests once took place is now surrounded by a chain-link fence; the crowded streets and their eight 15-story buildings have since been demolished. Only a fraction of Cabrini Green still stands and is used as public housing. In 2010, Cabrini Green, like most of Chicago’s public housing projects, was destroyed, its population dispersed, and its buildings reduced to empty fields.

The story of Chicago’s public housing is as much a tale of government and bureaucratic choices as it is a tale of local leadership and communities fighting against structural injustice. To properly recognize the people behind the fight for justice, like Cabrini Green leader Marion Stamps, and the problems they faced, we are required to return to these housing projects – the initial vision associated with them, and their profound failures.

The creation and preservation of Chicago’s public housing spread over many federal and state administrations, and served different populations at different times. First Commissioned by FDR’s Public Works Administration, public housing across the United States was set in motion to provide low-cost, publicly owned, multi-family housing. Federal grants would subsidize WWII veterans returning home and would help resettle those displaced by urban renewal. Public housing would later be governed by the federal department of Housing and Urban Development, currently headed by Dr. Ben Carson. The 21st century destruction of Cabrini Green, like its origins, was part of a national movement: this one called the Plan of Transformation which destroyed many housing projects, replacing them with various other programs.

Known to be one of the only people to have ever successfully negotiated a city-wide gang truce, Stamps is a lesson that civil rights, while personal and individualized, often require a powerfully organized community commitment to justice in order to achieve.

The prospect of public housing was originally exciting. Subsidized housing would bring people closer to the inner city, even while such people worked on low wages. This would ideally diversify urban spaces along class and racial lines, mixing the demographics of the inner-city. However, from the get-go public housing was rife with problems. At its earliest moments, public housing was used as a tool to separate and isolate demographics. The physical, material buildings would eventually become neglected and underfunded: minor breaks in the buildings became severe and long-lasting. In the 1990s, a trash-chute in one of the Cabrini-Green towers was once reported to have been clogged and backed up 15-stories. Elevators were routinely broken and always distrusted. Chicago’s infamously brutal police force created a supplementary agency for policing Chicago Housing Authority (CHA) buildings and areas, a force whose influence ranged, and being caught up in drug racketeering schemes and murder plots was not unheard-of (I strongly recommend reading Jamie Kalven’s 4-part piece “Code of Silence”). The social organisms of gangs evolved to become the effective, albeit violent and fear-inducing, authority that the police failed to be, and depended heavily on marketing drugs. At one point, a Chicago newspaper reported, 95% of the 20,000 residents living in the Robert Taylor Homes were ‘unemployed and listed public assistance as their only income source.’

Elizabeth Wood, appointed in 1934 as the first director of the CHA, understood that “exploiters are having a field day… The next generation will have to cure this generations blindness.” The challenges presented by the many faced violence, poverty, drug abuse, racism-induced political negligence, among others, were all tangled, knotted and frayed, in Chicago’s public housing. It was in these federally and locally controlled spaces that these problems festered, into at least the early 2000s, when much of Chicago’s public housing was destroyed and its land placed on public real-estate markets.

Within these communities neglected by but also so closely created and watch by government, communities rose up in self-defense and in pursuit of justice, equality, and peace. Community movements in Chicago public housing would be powerful enough to elect Chicago’s first black Mayor, Harold Washington. Marion Stamps was one of the many that helped organize for this victory.

Stamps, an organizer from Cabrini Green, dedicated her lifetime to the improvement of housing-conditions, and all the various inequalities it stored, for her community. She was one from a sea of organizers, often African American women, who fought, in the words of Malcom X, “by any means necessary” to break free of the tangled web of poverty, racism, and violence through tenant organizing. Coordinating with other organizers across the city, Stamps would become an indispensable organizer for the election of Washington. She fought publicly with Mayor Byrne – the mayor to precede Washington – when she “moved into Cabrini Green” after a particularly violent season, but was secretly escorted out when night fell. Known to be one of the only people to have ever successfully negotiated a city-wide gang truce, Stamps is a lesson that civil rights, while personal and individualized, often require a powerfully organized community commitment to justice in order to achieve.

Chicago’s infamously brutal police force created a supplementary agency for policing Chicago Housing Authority (CHA) buildings and areas, a force whose influence ranged, and being caught up in drug racketeering schemes and murder plots was not unheard-of.

Beyond Stamps’ high-profile and politically-significant victories, Stamps achieved real day-to-day success in the creation of sustained tenant leadership—responding to the daily, and often times the most essential, needs of her community. Tennant organizers took on a particularly important role as the dependable provider for families in essential moments – when the front door broke off, or when electricity was cut, or when money for food was scarce (sociologist Sudhir Vankatesh provides an account of one such tenant leader ‘Ms. Bailey’ in the Robert Taylor Homes in his book ‘Gang Leader for a Day’). In Cabrini, Stamps founded the Chicago Housing Tenant Organization, a group whose (in her words) “primary responsibility was to act as advocates for tenants in public housing.” The CHTO took on the responsibility of communicating tenant needs to the bureaucratic and governmental CHA. The CHTO would eventually mature into the Tranquility Marksman Memorial Organization, once located on 440 W. Division St.

After Stamps’ death, one Cabrini Green resident reflected on “how hard Ms. Stamps had to fight to get this brother over there a job. He’s one of the ones working on a construction site on Laramie [the street on the Western border of Cabrini Green]. You know? Just as a laborer! It shows you the whole context of what’s going on…” Stamps and Black Panther activist Fred Hampton lead a breakfast program to feed students before they arrived at school every morning. Although she had to wake up at 6 a.m., Stamps remarked, she was always left feeling better because “we knew that those children went to school first of all full, and secondly, they had already gained some knowledge before they went into that classroom so it wasn’t going to be as easy to miseducation those children…” 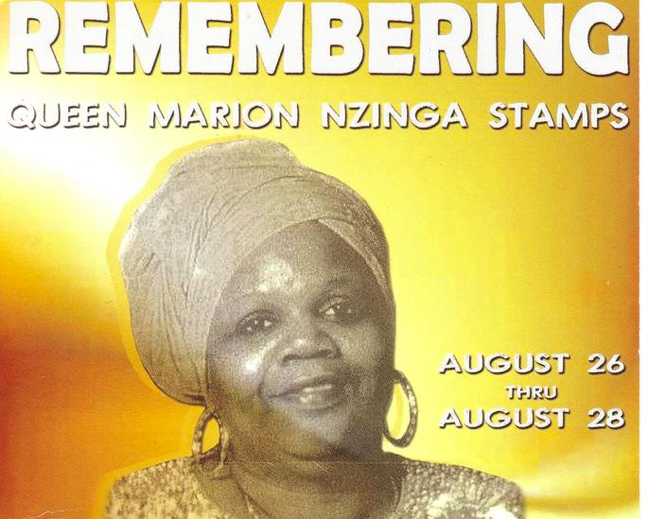 Posthumously, Stamps’ successes and significance have been disputed generally by those outside her community. As the Chicago Tribune published a month after Stamps’ death, “Stamps and her approach to community activism had become largely irrelevant long before she died of a heart attack late last month.” However, according to the leader of the National Black United Front in Chicago Conrad Worrill, this is one many attempts to steal and whitewash powerful people of color by “white supremacy forces and spin doctors.” Remembering Stamps, from outside her community, especially after the uprooting of the Cabrini-Green community, it’s important to commemorate her with due honor. At the Tranquility Marksman building, at the 1993 grand opening of a mural that read “PEACE IN THE HOOD,” two children shouted “Peace begins with me!” to a Chicago Reader reporter. They echoed a sentiment powerfully championed by Stamps herself: “The peace existed in Cabrini because the people in Cabrini.” Not because the politicians. Nor the police, nor the CHA officials. Because of the people themselves, fighting together, and tirelessly, for an equitable and peaceful world. Fighting for a world where the right to a secure home, to food and a job, are all ensured. Fighting for personal rights that demand communal cooperation to achieve.