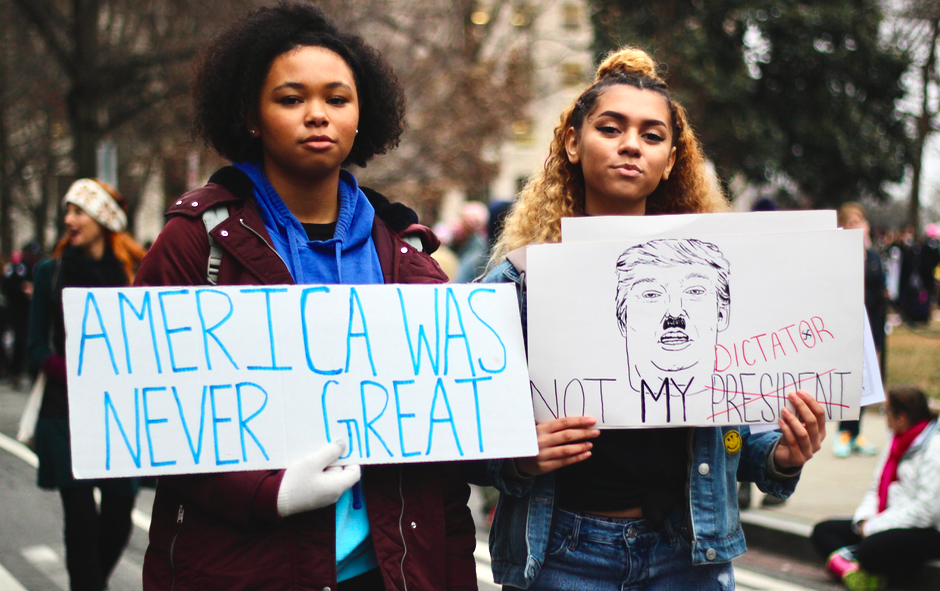 When I first arrived to the march and saw the sheer amount of white women surrounding me, I thought that it was nice to finally see those in a position of power taking over the fight. Activism and community organizing can grow incredibly taxing, in both the physical and emotional sense. I have witnessed people that are so tireless in their activism there are days that they cannot even take a breath – such activist work is largely undertaken by marginalized people of color. For a second, I was glad white women were taking the burden.

Then, I realized they weren’t. The women around me weren’t there to talk about intersectionality or allyship; they weren’t here to fight for others. Rather, their minds were laser-focused on their rights as white, often upper and middle class, cisgender heterosexual women. There were very few chants and signs that discussed the violence against indigenous peoples or undocumented immigrants. Marchers were more comfortable raising their voices in an obscene chant against Trump than they would “!Si, se puede!” (Yes, we can!) or “Black Lives Matter.” When individuals did start those chants, I often heard marchers talk about how we “weren’t here to talk about race” or the racialization of such issues took away from the fact that it was a “women’s march.” This “deracialization” of gender created a default of womanhood that was based in whiteness and white issues. In turn, women of color had to be there to remind people that they existed, that their issues mattered, and that they were the foundation of the fight. 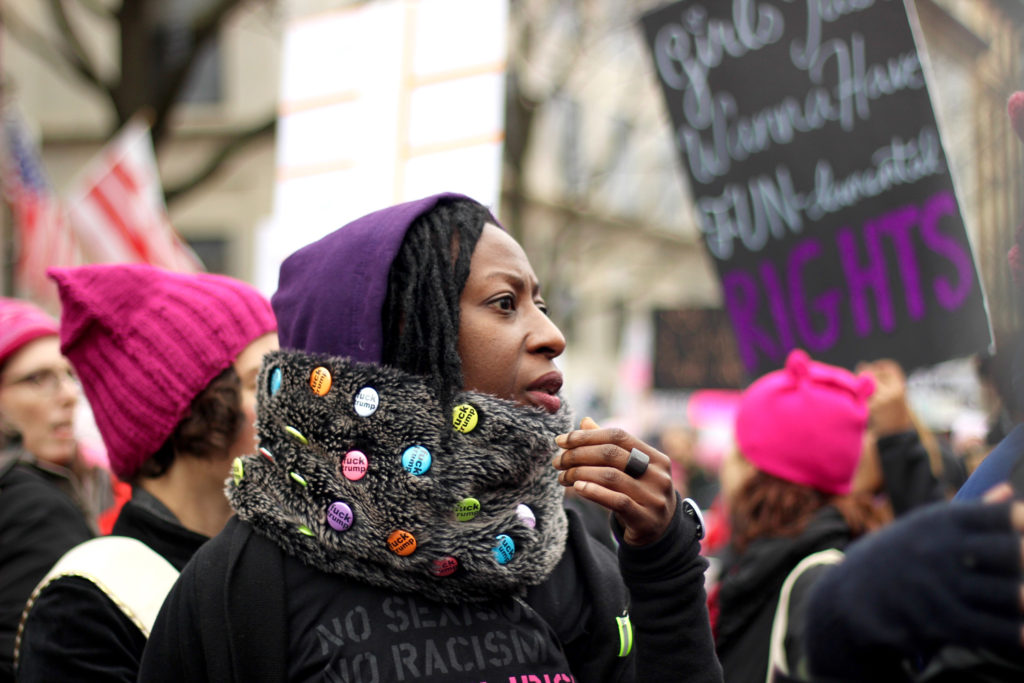 At one point in the march, Madonna climbed on stage and proclaimed how she had fantasized about blowing up the White House. As so simply and eloquently put by Nadya Agrawal, “People laughed. The cops, who showed up in full riot gear, swayed on their feet and looked bored. How would they have reacted if she were black or Muslim and saying these things?” I remember feeling horrified – I remember feeling livid at the privilege of being able to say such a thing without any fear of not being arrested – or simply, shot on sight.

Once Trump was in office, “much of the post-election news cycle was dominated by White folks wringing their hands: How could this happen? Why did it happen?” White women are angry enough to feel the need to attend the Women’s March, yet are never angry enough to have attended (or attend in the future) marches addressing the murder of black Americans or fight against policies that deny healthcare to immigrants. People of color are cleaning up the mess that white women had helped build by remaining inactive until it’s just too late – a system that affects us and our families more than it ever will them. 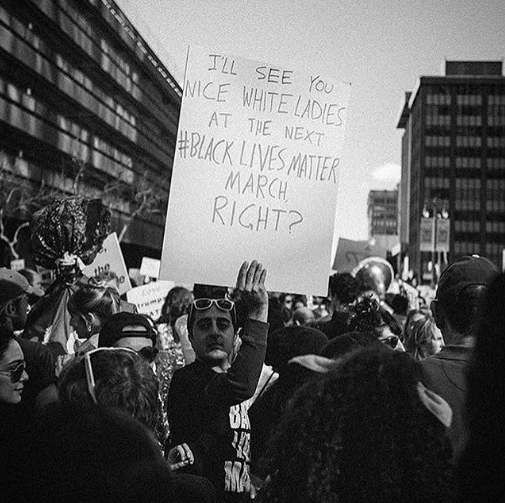 I witnessed some incredible things at the march – I met the odd Vermin Supreme, watched mothers breastfeed as they marched, saw cafes distribute free food and drinks to attendees. Along with such momentous glimpses, I saw white marchers hugging police officers.

For a moment, when that hug would occur, I was expecting violence. I was expecting a baton – I was increasing my stride in case I needed to step forward and drag someone to a safe location. I was filled with terror as I witnessed this exchange, and then incredulity as the moment passed with nothing but calm.

As a Palestinian who has lived under an occupational force where the police and military execute the law (which usually translated to the arrest of brown youth for the crime of simply existing), I understand such groups as nothing more than active participants in a system of brutality, colonialism, and discrimination. Since moving to the States, I have not had to experience police brutality or injustice as often. I am a white-passing Arab with features that don’t often make the cut. It has been an incredibly strange experience to not be thrown into those jaws of power-hungry law enforcement. To live with the trauma but transitioning to a space where I no longer experience it on a daily basis, being around the police often fills me with an incredible anxiety.  Here I was, at a march for human rights watching white people and the police shake hands and talk about the weather.

In that moment, I truly saw that this was not a march centered on radical rights for women – on ending the murder of black boys, the abuse of those who protested at Standing Rock, or the physical and emotional violence against those thrown into the prison industry. It was not about defending marginalized communities of color and the stereotypes that perpetuate violence against them. It was not a march dedicated to disrupting and deconstructing the violent, power-hungry law-enforcement systems that target marginalized communities. 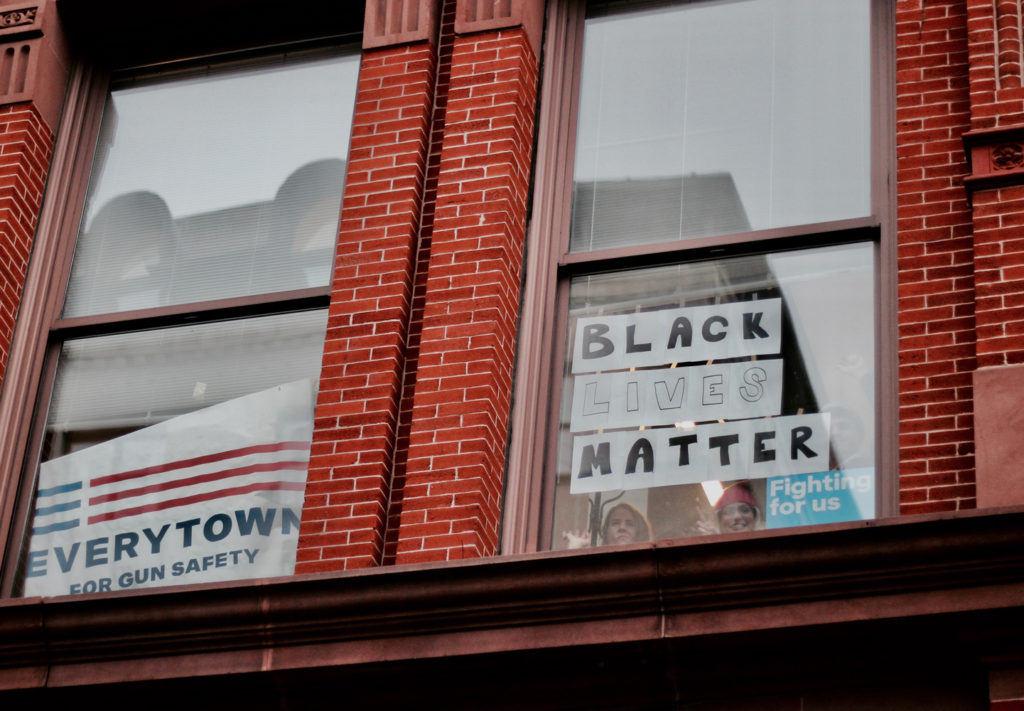 Later that week, the news was flooded with mass praise for the Women’s March went with zero arrests. This image was used to critique civil rights movements – especially BLM – that are often led by marginalized communities. The media implicitly called people of color uncontrolled and feral – animals who cannot be tamed, and so who must be caged (detained in jails).

When I first entered the underground train station of Washington D.C, I was stunned by the sheer number of pink hats I saw. In talking to a few women, I found out that the hat served to counter Trump’s controversial slogan “grab ‘em by the pussy”. The pussyhat, which became a common marker of a Women’s March attendee, was meant to irreversibly tie womanhood to the presence of a vagina. No vagina, not a woman. Not a woman, not here for you. 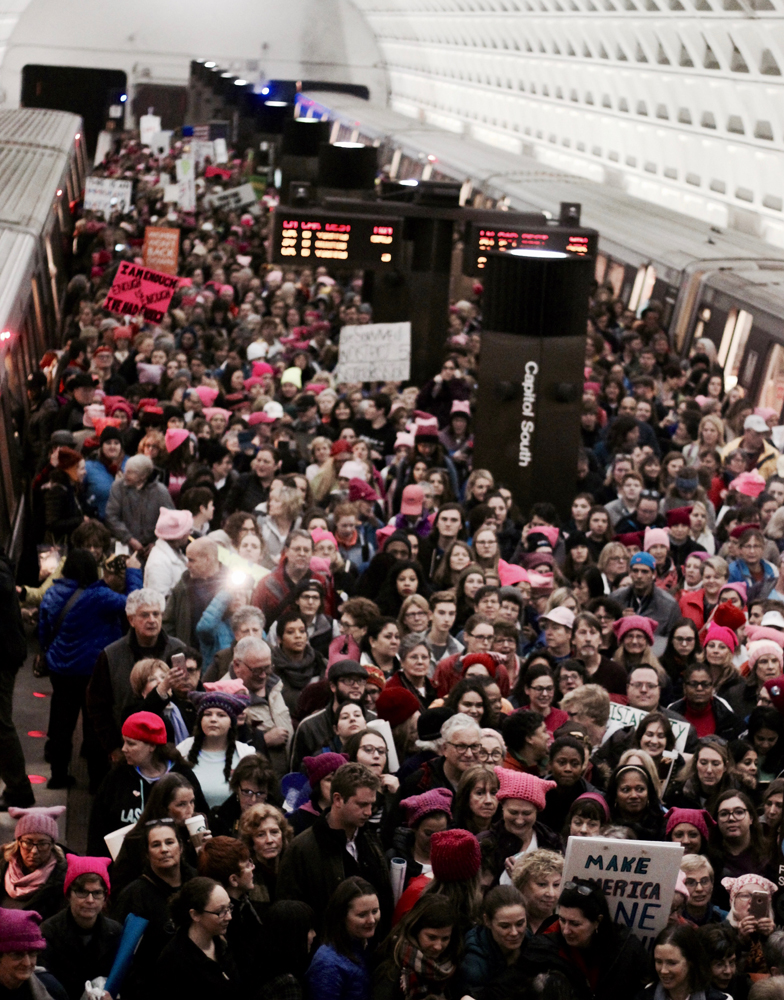 I will say, people who are angry at Trump’s statement have every right to be (the way he encouraged a violent and non-consensual action against someone’s body through the statement is simply disgusting); there is nothing wrong with having a conversation about the ways in which policies have sought to restrict bodily freedom and function (as we have seen with pushes to close abortion clinics, for example). There is, however, a major difference between discussing oppression associated with a specific bodily function and equating womanhood to its presence or absence.

The Women’s March was meant to be a rebellion – against gendered expectations, gendered roles, and gendered treatment. It is ironic that the march perpetuates the “trans marginalization in post-Trump feminism”, when we should be finding strength and power in the existence and experiences of trans women and femmes. As Meredith Talusan puts it, “Cisgender white women are deemed nasty when they behave in a way that challenges gender norms. But trans women and femmes’ very existence is rooted in rebellion against gender expectations: we defy the patriarchy’s fundamental assumption that any person “born” male would never want to give up that privilege. In this era of crisis, feminists must turn to the example of transgender women and femmes, who have always been nasty.”

Attendees of the march also centered genitalia and physical structure as markers of womanhood through their signs. The majority of posters I saw held images of vaginas, uteri, and fallopian tubes. All of these images created a space where trans women were simply made invisible. The majority of marchers did not seem to have any recognition of how their signs were harming the trans women and femmes around them, developing a toxic environment that only centers the rights of cisgender women. I did not hear marchers chant for the medical and legal rights of transpeople or queer communities. In fact, when marchers and independent writers went online to complain about the pussyhats’ exclusivity, the conversation was seemingly deemed inconsequential.

All I will say about such a claim is this: fashion is political. What we wear, where we wear it, and why we choose or refuse to wear, is a reflection of how much we value the protection and representation of the communities that surround us. When we refuse to talk about the politics of clothing, we are refusing to talk about how clothing has been used to influence and manipulate the local and global politics of gender, sexuality, race, and social class. 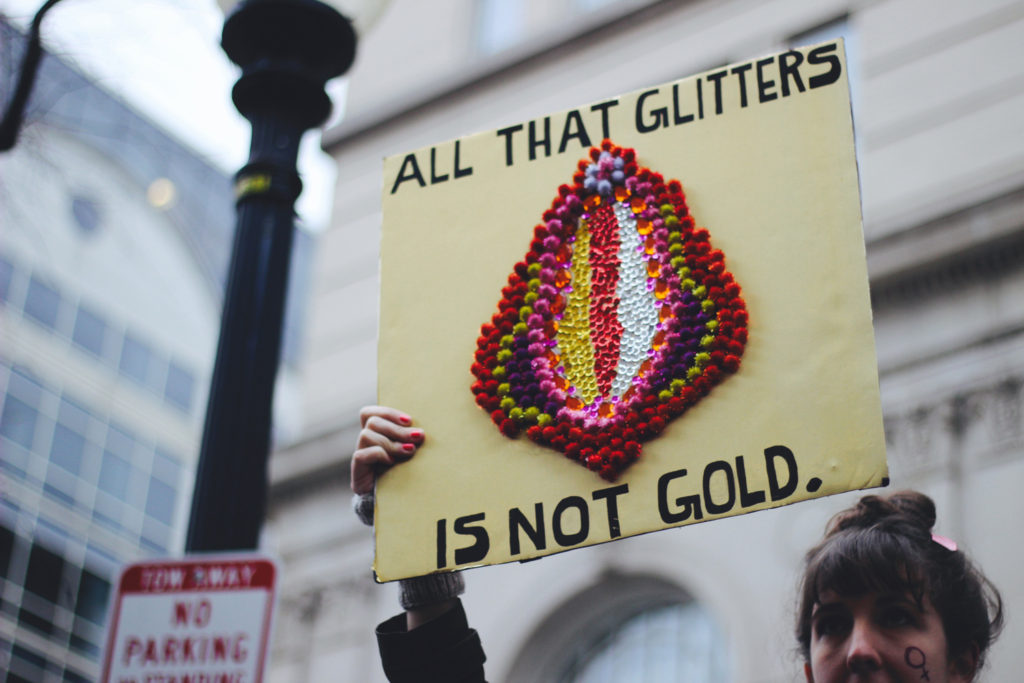 Despite all of these issues, I will say I do have hope for the Women’s March. I do have hope that marginalized communities can come together and challenge the system – if we’re willing to put the time and effort into having the difficult conversations we need to have.

For now, those who attended the march this year need to remember why they choose to march and ask themselves: who are they really marching for?

Is the customer always right?: How prejudice in service industry harms employees