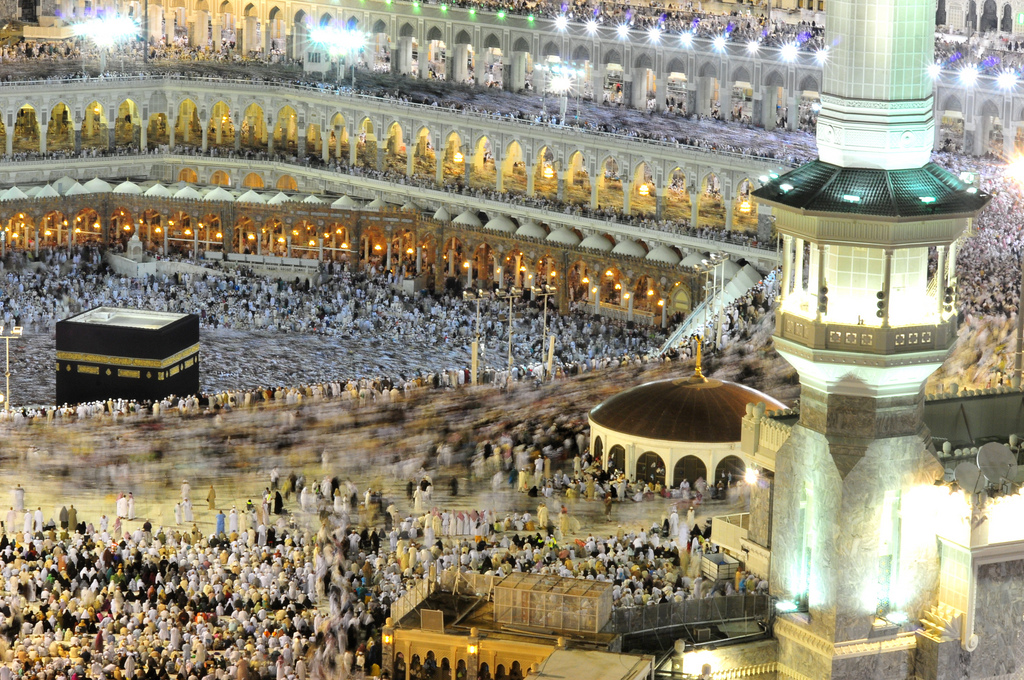 Many Muslims returning from the holy pilgrimage of Hajj in Mecca bring back spiritually empowering stories. However, more and more Muslim women are beginning to open up about unspeakable, horrible memories of a journey thought to be holy, pure, and most of all, safe.

The victims of these sexual assaults started to share their stories earlier this year, under the hashtag #MosqueMeToo.

The hashtag got retweeted over 2,000 times within 24 hours according to BBC.

With #MosqueMeToo, Muslim women all over the world shared and continue to share stories of being groped in large crowds and being touched inappropriately while completing Hajj or in other religious settings. In the midst of thousands of people, a vast majority of these women were not able to find safety or bring attention to their mistreatment.

But, due to a spark started by Mona Eltahawy, an Egyptian-American writer, a wildfire of women described their assaults on Twitter. Eltahawy, who was 15 when she was groped during Hajj, waited 35 years before outing her trauma to the world. After her initial tweet, women echoed their stories, raising concerns that no place is safe for them, even in the holiest place on earth. 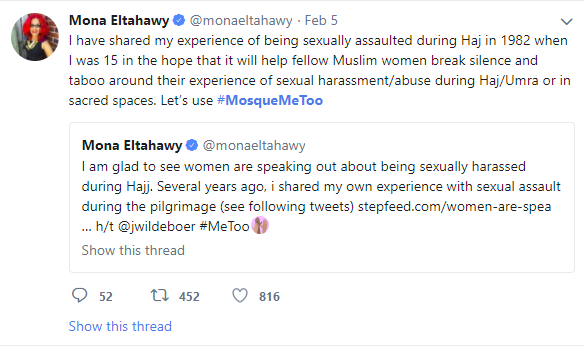 The #MosqueMeToo movement initially began in response to Sabica Khan’s viral Facebook post where she outlined her experience and explained being petrified and unable to speak out.

While performing my tawaaf around the Kaaba after isha prayer, something really weird happened. It was my 3rd tawaf, and I felt a hand on my waist. I thought it was just an innocent mistake. I completely ignored. Then… I felt it again. It made me feel very uncomfortable. I kept moving. During my 6th tawaf I suddenly felt something aggressively poking my butt, I froze, unsure of whether it was intentional. I ignored and just kept moving slowly because the crowd was huge. I even tried to turn around but woefully couldn’t. When I reached the Yemeni corner, someone tried to grab and pinch my butt. I decided to stop there. Grabbed his hand and threw it off me *couldn’t move or turn around* I was literally petrified. Couldn’t even escape, so I stood, and turned around as much as I could, to see what’s happening, I turned around but… couldn’t see who it was.

I felt so violated. I felt unable to speak out. Stayed quiet because I knew no one would trust me, or nobody would take it seriously, except my mum. So I told her everything when I returned to the hotel room. She was incredibly confused and devastated. After this incident, she never allowed me to go there again alone.

It’s sad to say that you are not even safe at holy places. I’ve been harassed, not once, not twice, but thrice. My entire experience at the holy city is overshadowed by this horrible incident.

I believe it’s totally okay and important to be open about harassment.

Don’t know how many of you had a similar experience there but this incident has unfortunately left me feeling upset.”

Eltahawy commented on the post saying to use #MosqueMeToo to allow more women to share similar experiences of sexual assault at Hajj. From there, Eltahawy took to Twitter.

Khan has now deactivated her account telling Deutsche Welle “I am having so many family issues because I raised my voice against harassment.”

Despite having inspired other Muslim women to speak out about harassment, Eltahawy has been criticized for bringing the conversation up on social media. Often, women are shamed and victim-blamed, or others simply don’t believe the women who speak of their experiences.

#MosqueMeToo is also a catalyst for women to raise their views on modesty and harassment, rebutting the presumptions in Muslim communities that covering protects women from predatory behavior.

Some Muslim countries such as Iran, Saudi Arabia, Egypt and Afghanistan force women to fully veil their bodies. Many Muslim women have been told that the the hijab is a protection from the gaze and predatory behavior of men. Such as in Iran, every office and public has the slogan saying “Hijab is not a limitation. It is your protection” written on the walls BBC reports. However, many women are being sexually harassed on streets and in public places where women observe the hijab or full-body veil. Modesty is an essential component in Islam for men and women. Even so, cultural standards have led to rulings for women are to be more visible, i.e. covering their heads with a veil in public. Therefore, Muslim women often face the brunt of criticism when it comes to modesty in Islam.

Sahar, 26-year-old non-Iranian student who had studied in Tehran once told the Guardian “But then I came to Iran, where hijab is mandatory, and I am still harassed in the streets. Men aggressively stare at me, talk to me, call me names. I feel naked, and worthless.”

Farzana from Yorkshire told Independent of her sexual harassment incidents. “I had my crotch grabbed in Pakistan in the bazaar. It was very crowded and I didn’t see who did it. I had a niqaab (full face covering) on at the time.”

#MosqueMeToo has many men thanking Eltahawy and the hashtag for bringing up a topic that they once had minimum to no knowledge of. Eltahawy expressed to Deutsche Welle her belief in the power of the voices of Muslim men to speak about the issue.

“Can you imagine the power of the Imam of the Grand Mosque in Mecca? That is the Imam often heard by the entire Muslim world. If he were to get on the pulpit in Mecca and give a sermon about sexual harassment and assault during Hajj, can you imagine how powerful that would be?”

The Tragedy in Mecca and Islamic Fatalism