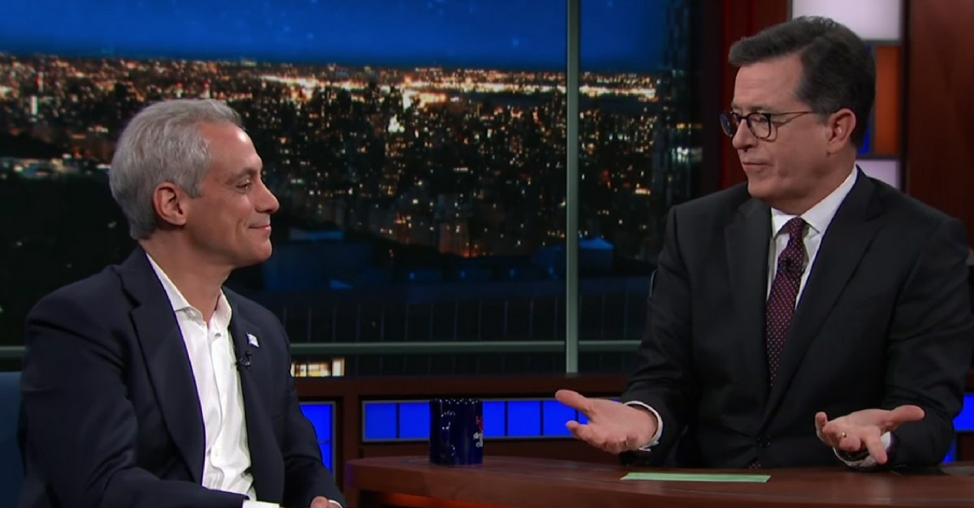 Chicago mayor Rahm Emanuel, after affirming his love for deep dish pizza and the Cubs, defended Chicago’s sanctuary City status on The Late Show with Steven Colbert this past winter. Colbert asked Emanuel questions concerning the relationship between Trump, the City of Chicago, and himself.

“The Trump free-zone,” Colbert went on to ask, “The whole thing. How does that work?”

Emanuel replied by nodding his head vigorously and said “The whole thing. Our motto: a city he’ll never sleep in. We don’t want him, man.” The audience responded, cheering loudly as Emanuel smiled broadly.

Mayor Emanuel and Trump have gone head to head before. Trump’s critical comments on Chicago resurfaced at a campaign-style rally in Pensacola, Florida. Trump asked the crowd “what the hell is happening in Chicago?” Earlier in 2017, Trump tweeted about Chicago and Mayor Emanuel.

Trump has not held back on his opinion of the city. Some quotes include “Chicago is a disaster” and “Chicago is out of control.” A catalyzing moment was when the president tweeted that he will “send in the Feds” to fix the city. Trump never fully clarified what “send in the Feds!” meant, but Mayor Emanuel reassured the public that the National Guard would not patrol the streets of Chicago, while welcoming other types of federal aid.

Mayor Emanuel repeatedly shut down comments from Trump on various issues, such as those regarding Chicago and gun control. His recent comments suggest that his new motto for Chicago is “a city Trump will never sleep in.”

Emanuel plans on running for a third term. He spent time pushing positions on issues that are debated on the national level. Mayor Emanuel expressed support for immigrants and opposed the Trump administration’s policies regarding their monitoring and deportation. He also criticized Trump’s administration for failing to recognize U.S. Steel dumping toxic chromium into Lake Michigan. Emanuel reassured the public that he will fight to protect the environment, despite the administration’s withdrawal from the Paris climate accords in a lack of concern for the environment.