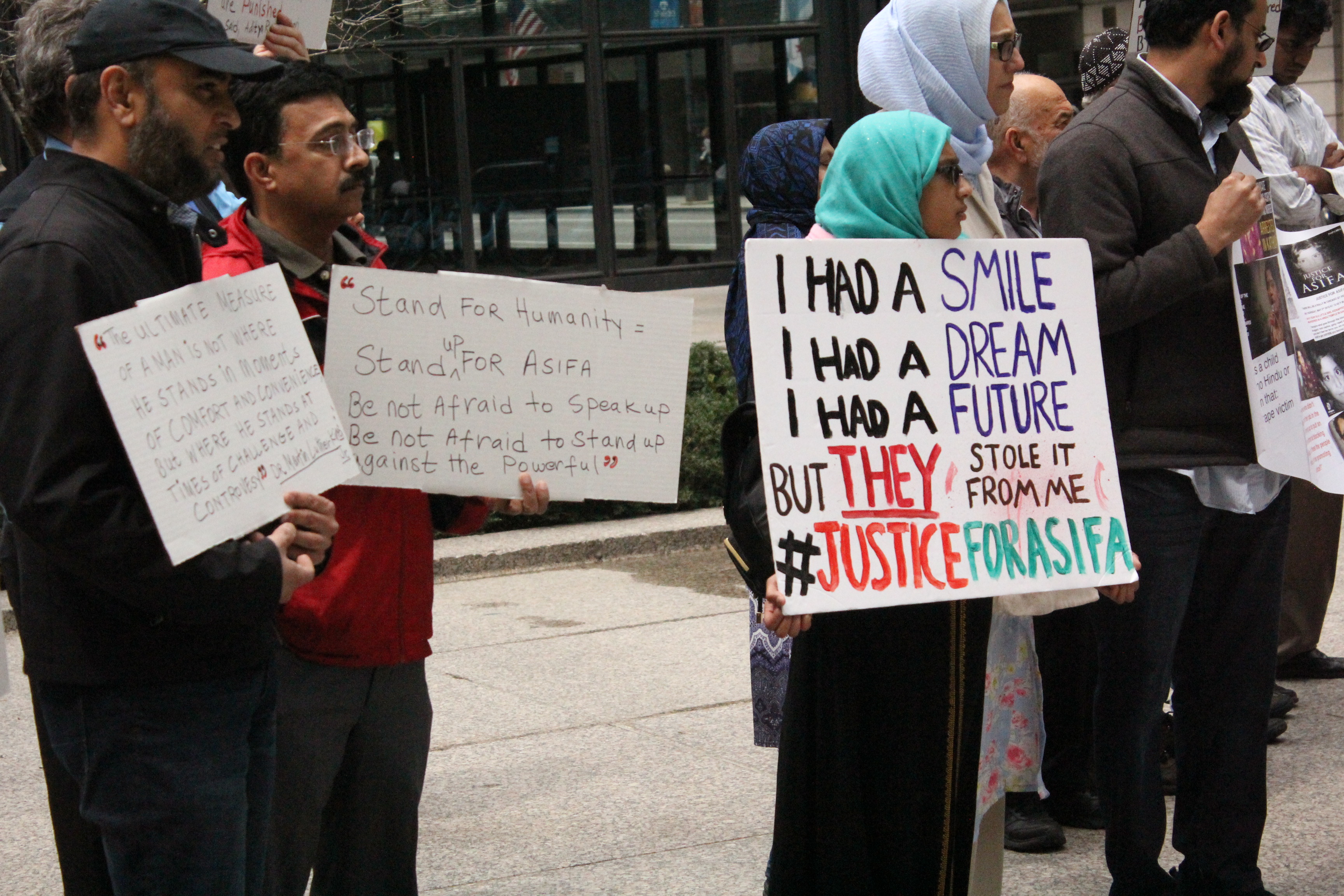 On Thursday, May 3rd, 2018, members of the Muslim and South Asian communities, along with their allies, congregated in Federal Plaza in Chicago, Illinois. The reason for their gathering was not for celebration nor deliberation. They came together for a rally to demand justice for Asifa Bano. Asifa was a young, Muslim-Kashmiri girl who belonged to the Gujjar people. In January of 2018, Asifa was grazing her horses in the forests of Kathua, Jammu and Kashmir when she was kidnapped. A few days later, her body was found–with no sign of the perpetrators. Later investigation found that Asifa was kidnapped, tortured, and raped by a group of men inside of a Hindu temple. Asifa was eight years old.

Asifa’s tribe, the Gujjar, are nomadic people. They migrate with the seasons, coming into the meadows of Kathua to graze their animals. The Gujjar’s presence so close to Jammu made the Hindu-majority uneasy. “They are encroaching our forests and water resources,” Ankur Sharma, a lawyer who worked to defend the perpetrators, claimed.  In an attempt to scare the Gujjar away, eight men took part in the kidnapping, assaulting, and murdering of Asifa Bano. The gang-rape and subsequent murder of Asifa Bano, while shocking, was no isolated nor unprecedented event. Women and girls are sexually harassed and assaulted at alarming rates within India; South Asia itself has just as high numbers. While not all of these incidents are monolithic–there are different motives for many cases–Asifa’s case shares characteristics with occurrences of violent female brutalization throughout South Asian history.

The notion of encroaching—intruding on land locals think to be their own—alludes to the citizenship status of the Gujjar muslims, and ultimately, Asifa. By encroaching, it would necessitate that the Gujjar people do not have the right to use the public land on which they graze their animals. That is effectively saying: the Gujjar people are not Indian citizens; they do not have the same rights as those in the Hindu majority who would rather the land for themselves. Therein lies the foundation for Asifa’s assault—she was a synonym for Gujjar identity, a herald of Muslim migration into Hindu land. That she was so young worked two-fold: she was an easy target while she also embodied the joy of her people. “[She was] the darling of the community,” as her mother said. To have that snatched from her people in such a tremendously horrid way no doubt shook them to their cores. As such, her death further incensed a deeply-seeded animosity that continues to drive the two religious groups apart.

Women have always been used as casualties in cultural and social wars. In a study published in 1989, scholars Nira Yuval-Davis and Floya Anthias laid out five manners in which the female body has been tied to demographic and nationalistic identities. Later, Katherine McClintock summarized them in “Family Feuds: Gender, Nationalism and the Family.” Women were:

Thus, when a man—or a group of men—collectively kidnap, sedate, torture, and rape a young eight-year-old girl, their crime is not merely rooted in their depravity. They were using Asifa’s body as a means to assault her cultural identity; she, in some way, embodied the five characteristics Yuval-Davis and Anthias recognized.

Partition saw similar assaults for similar reasons—women were displaced, assaulted, and murdered for the identities they represented. More than 75,000 women were abused in the wake of South Asia’s historic schism– used as political, social, and economic battlegrounds. Saadat Hasan Manto’s popular short story, “Thanda Gosht,” or “Cold as Ice,” described a scene that exemplified the abuse of women during Partition:

“Cold sweat ran down his forehead as he began to recount.

“Kalwant, my life, I cannot begin to tell you what happened to me. When the riot broke out in the city, like everyone else I also participated. I gave you the loot but did not tell you one thing.”

Eesher Singh groaned with pain. Kalwant Kaur had no feelings for him and paid no attention to his suffering.

Blowing on the blood-cot forming on his mustache, Eesher Singh said, “The house I attacked had seven people in it. I killed six of them, with the same dagger you stabbed me with. There was a beautiful girl in the house. I took her with me.”

“Kalwant darling, I cannot tell you what a beautiful girl she was. I would’ve killed her too. But I said to myself, no, Eesher Singh, you enjoy Kalwant Kaur every day. Taste a different fruit.”

“Then what happened?” Kalwant Kaur shook him.

Eesher Singh opened his tired and sleepy eyes and looked at Kalwant Kaur, whose whole body was trembling.

In the story, the perpetrator, Eesher Singh, recounts how an attempted rape of a girl of a different background left him immensely disturbed. He spoke of her as if she was loot to be plundered, much like that which he previously acquired. To take her would be taking from her ethnic group–she deserved no respect, because she was other. Only when she was dead, killed out of fright, did he see the human in her.

Thus, it would be unjust to call for justice for Asifa, as well as the hundreds of other women (close to 100 women are raped in India a day), without addressing the immense power nationalistic and religious gender roles at play within these actions. Such situations bring to light the titular question Catharine A. MacKinnon posed in her book Are Women Human?. In order to prevent such horrible crimes from reoccurring, we must first ask of ourselves to dismantle the association between feminine bodies and the nation in all tiers of society. We must push the state for legislation to hold assaulters properly accountable for the nuanced intent of their crimes. In addition, we must hold the administration accountable for executing such legislation—in Kathua, BJP members were rallying for Asifa’s murderers instead of Asifa. Finally, we must work as individuals in the grassroots to strike down the dehumanization of women by aligning them with identities outside of their agency. To rally for Asifa is a start—let’s hope one day we no longer have to.