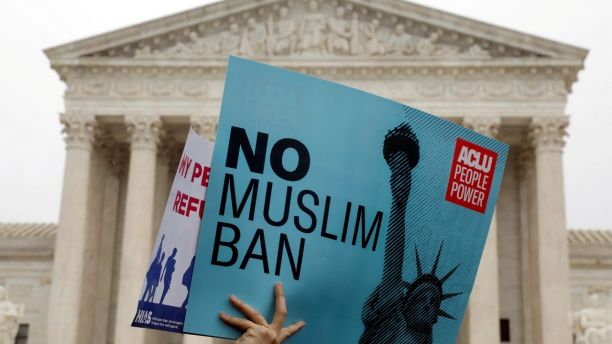 Facebook
Twitter
Pinterest
WhatsApp
Email
Print
This week, The Supreme Court compromised its own integrity. It joined the Trump administration to override our most precious safeguards in the U.S. Constitution. The Supreme Court’s decision to uphold the Travel Ban has allowed the Trump administration to discriminate based on religion, violate the establishment clause of the Constitution and ignore intent that lays outside of the document it reviews.

“A complete and total shutdown of Muslims entering the United States.”

This is what Donald Trump called for on the campaign trail. Following his intent, the first Travel Ban identified seven Muslim majority countries. The language itself stated propaganda terms such as “honor killings” which made it obvious the ban’s focus was on barring individuals who were Muslims.
In the current version of the Travel Ban, the Trump administration threw in strawmen such as Venezuela and North Korea to satisfy the implications of Establishment Clause violations and make the Travel Ban neutral in its plain language. There is virtually no immigration from North Korea to the United States. In addition, Venezuela‘s restrictions only result in limiting the nation’s leadership.
The smoke and mirrors, to hide the overall goal to violate the Establishment Clause as legal, is transparent at best. Then why would the Supreme Court uphold the Travel Ban despite the transparency of intent and turn a blind eye? The reason is simple; because the Supreme Court’s intent and the administration’s intent on this matter are in alignment. That intent being: To halt the growing number of Muslims living in the United States due to fear of demographic change. The seven stated Muslim countries in the Travel Ban are those with the largest number of refugees coming from Muslim countries as recorded in 2016. Islam is the fastest growing religion in the United States with its immigrant population being the most educated of all immigrant populations.
This is Supreme Court’s own description of its duties:
“The complex role of the Supreme Court in this system derives from its authority to invalidate legislation or executive actions which, in the Court’s considered judgment, conflict with the Constitution. This power of “judicial review” has given the Court a crucial responsibility in assuring individual rights, as well as in maintaining a “living Constitution” whose broad provisions are continually applied to complicated new situations.”
The Trump administration has repeatedly failed to show a factual connection between Muslim refugees, immigrants, and domestic terrorism. There are no new proven “complicated situations,” specifically when compared to the rise of white supremacist domestic terrorism threats on US soil. In addition, the Supreme Court has failed at it due diligence in judicial review in failing to invalidate the Travel Ban as it was clearly created to bypass the protections of individual freedoms and freedom of religion afforded by the Constitution.
In its decision, the Supreme Court states, “The Proclamation (Travel Ban) moreover is facially neutral towards religion. The plaintiff’s ask the Court to probe the sincerity for the policy by reference to extrinsic statements made before the President took the oath of office.” According to the Supreme Court, a person’s intent if unconstitutional in nature, if not displayed in the document he or she creates, regardless if verbally stated in public record does not carry any weight.
To make this permissible only leads one to conclude that the irrational fear of demographic change is so strong that powerful institutions will cower including those entrusted to protect us. Last week families have been separated at the border and Trump has asked for asylum seekers deported without due process. The Spanish speaking population is the largest growing minority in the United States.
It does not seem that the strategic tactic of ignoring constitutional violations by this administration to halt diversity will stop at Muslims. We should all be prepared. Justice Sotomayer states it best in her dissent: “Based on the evidence in the record, a reasonable observer would conclude that the Proclamation was motivated by anti-Muslim animus. The majority holds otherwise by ignoring the facts, misconstruing our legal precedent and turning a blind eye to the pain and suffering of families.” In a nutshell, those that believe in the Constitution just realized its protectors are only we, the citizenry.

Peaceful and Racist Transfer of Power to President Trump