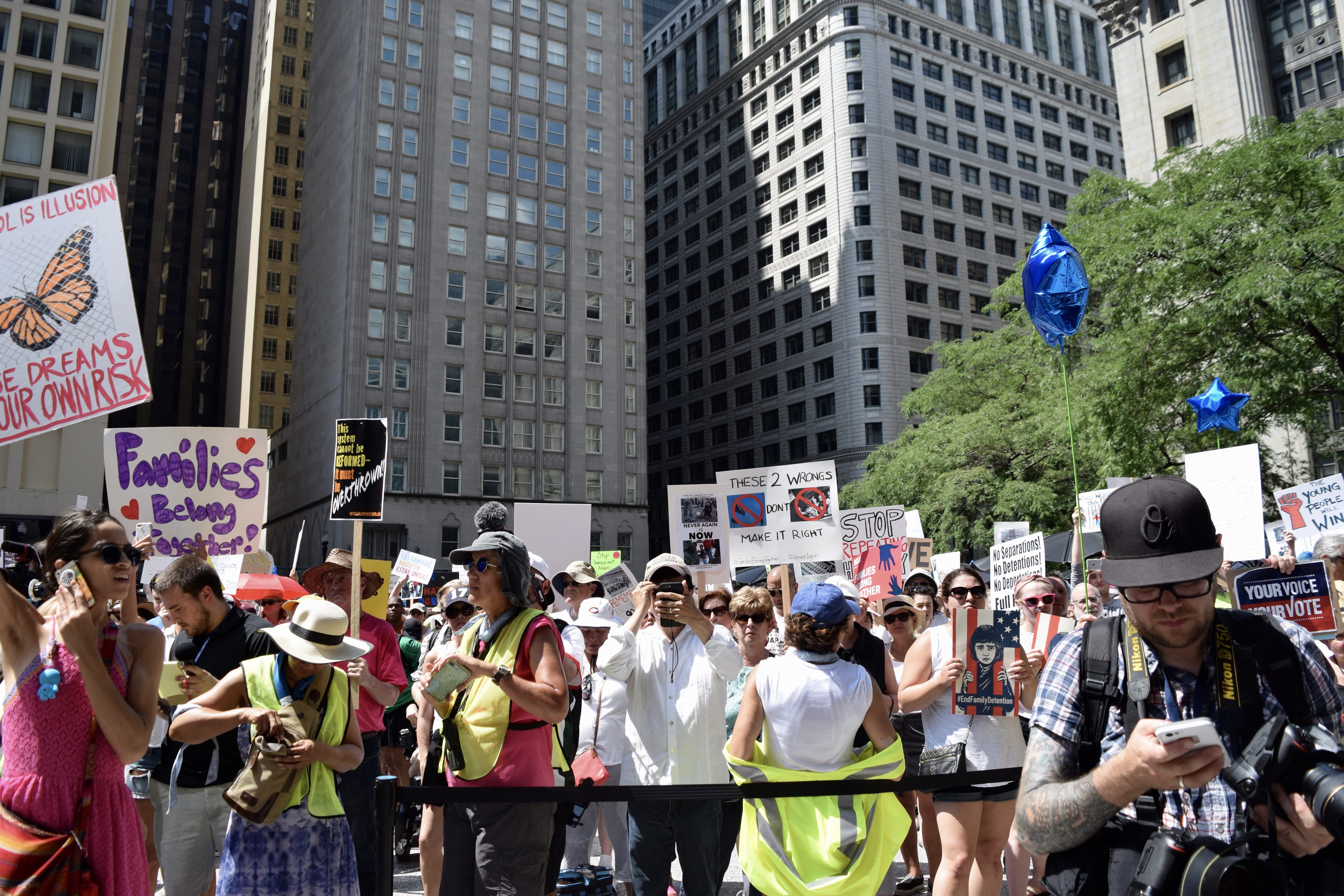 Chicago came alive once again with the intent to fight family separation. Despite the blazing 95-degree heat, more than 50,000 protestors took to the streets and defy the ignorance of the current administration.

At Daley Plaza, thousands gathered to chant, exchange stories and feel empowered again. In a particularly hot summer day, protestors shared their water with others and passed out bottles along the march’s route. Signs stating “Not the America I love” and “Love knows no borders” were scattered throughout the crowd. Next to the stage four men carried a large dog kennel on their shoulders chanting, “Free our children!”

The #FamiliesBelongTogether march took the nation by storm, with over 700 events taking place on Saturday, June 30. The marches were in response to President Trump’s “Zero Tolerance” policy on immigration, which has led to the separation of 20,000 children from their families. This threat has created a unified uproar from U.S. citizens, both documented and undocumented alike. 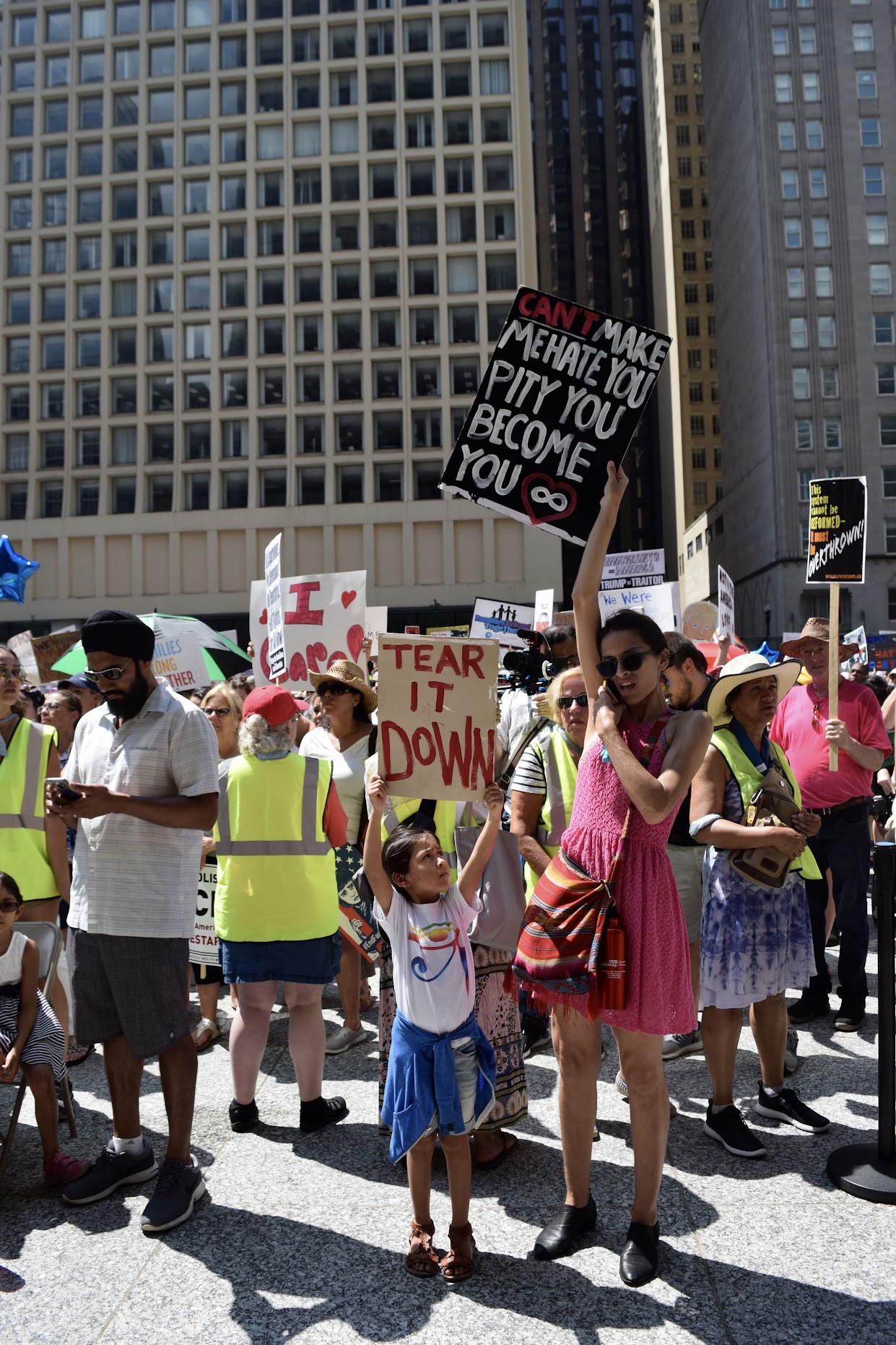 “Estamos unidos! We are united. Muslim, Latinos, African American, Asian, White, Jewish, Christian, we are all united and we stand against hate and bigotry!” said Ahmed Rehab, Executive Director of CAIR-Chicago, during the march’s rally. Rehab, along with many other speakers in Chicago’s march, put the value of unification against hate at the forefront of their speeches.

What unified the 50,000 marchers that day? The idea of what it means to be an American.

““I’m Palestinian-American, I’m Muslim-American, I’m Arab-American, I’m American. I am what America is,” said Ahlam Jbara, the co-host of the rally and former deputy director of the Illinois Coalition for Immigrant and Refugee Rights (ICIRR). Jbara and the thousands of other protestors marched under the rights of being an American and a human being.

“It’s really going against what America was made for and, you know, our message,” said Mariya Mujaahid, a young protestor disgusted by the recent changes in policy towards family separations and the Muslim Ban. After being in the crowd since 10:50 am. The heat was a challenge, but for Mujaahid, it was worth it when thinking about the future of the detained children. “The thought of kids being separated, for one thing, and then put in detention centers. You don’t know what they’re going to do to [the children] in there. What the other children will do to them… what security will do. You don’t know what’s going to happen to them.” 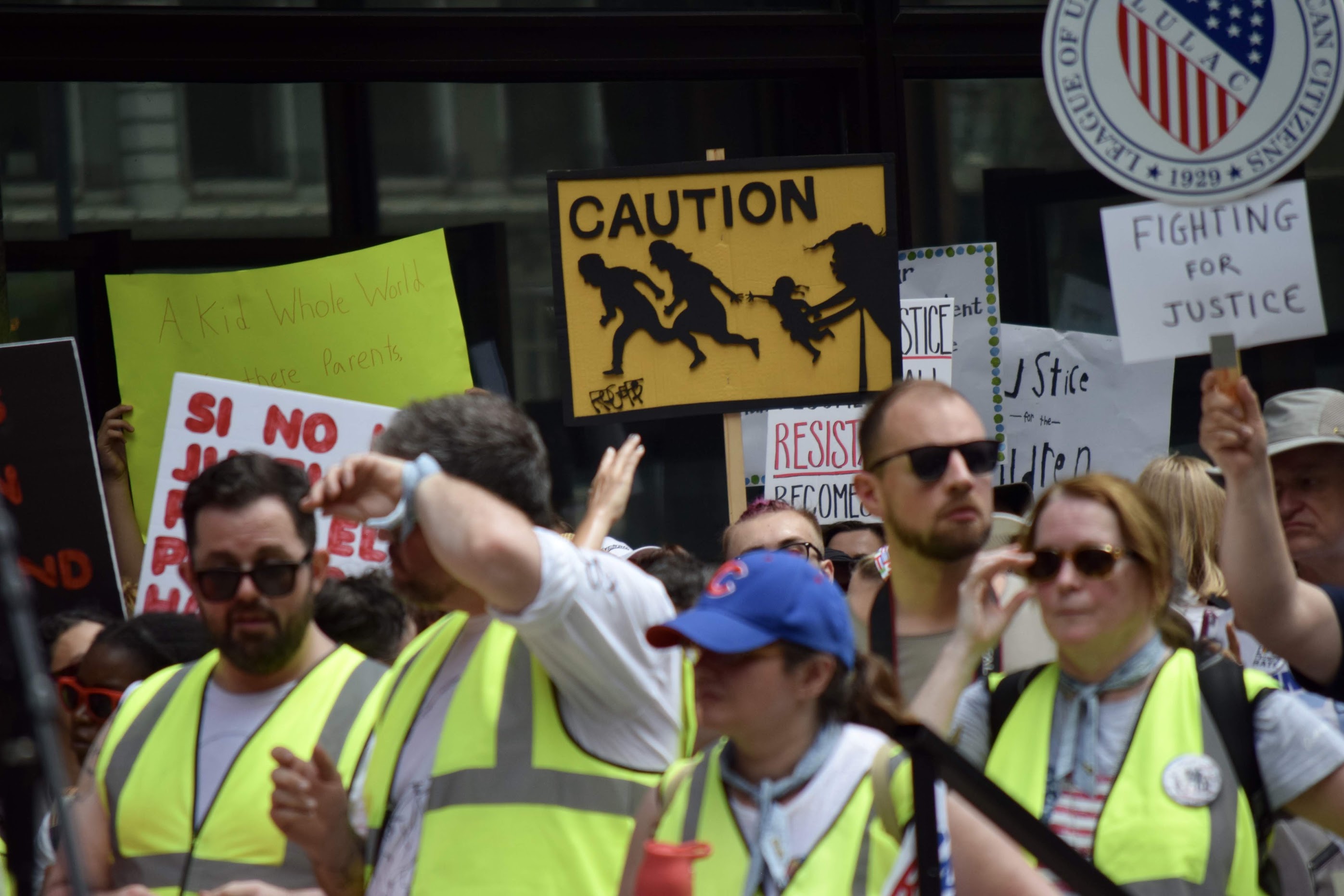 “Parents have no choice but to leave. The fear driving these families north is real, and we don’t have clean hands in Central America,” said speaker Virginia Martinez, attorney and advocate on the issue. Martinez discussed what she has seen and heard from the families at the border, including the terrible living conditions of the detention centers. Martinez said that one of the horrific reasons for many families leaving countries in South America to come to the U.S. are gangs call mothers to hear their daughter’s being tortured.

“We, the United States, is to blame for much of this violence.” said Martinez.

This is what motivated the marchers to create an inclusive space. Chants and speeches in both English and Spanish resounded through Daley Square and the neighboring streets. “Si, se puede!” (“Yes, you can!”) could be heard throughout the crowd. Other familiar chants, such as “No hate, no fear, immigrants are welcomed here!” were also shouted during the march. As the mass of people conquered block by block, passersby were in awe of the demonstration. Snapping photos and even joining the crowd, many were stunned by the sheer size of the group. When approaching the Metropolitan Correctional Center, inmates could be seen looking at the protestors from their gated lookouts. The march seemed to take the attention of everyone in Chicago and force them to listen.

“I feel really proud of where we live and for all these people to come out in this heat when it would be so easy to just stay at home,” said young protestor Alec, who declined to give his last name for privacy reasons. “But people realize that every voice every human being, every body matters in something like this, and it sends a signal.”