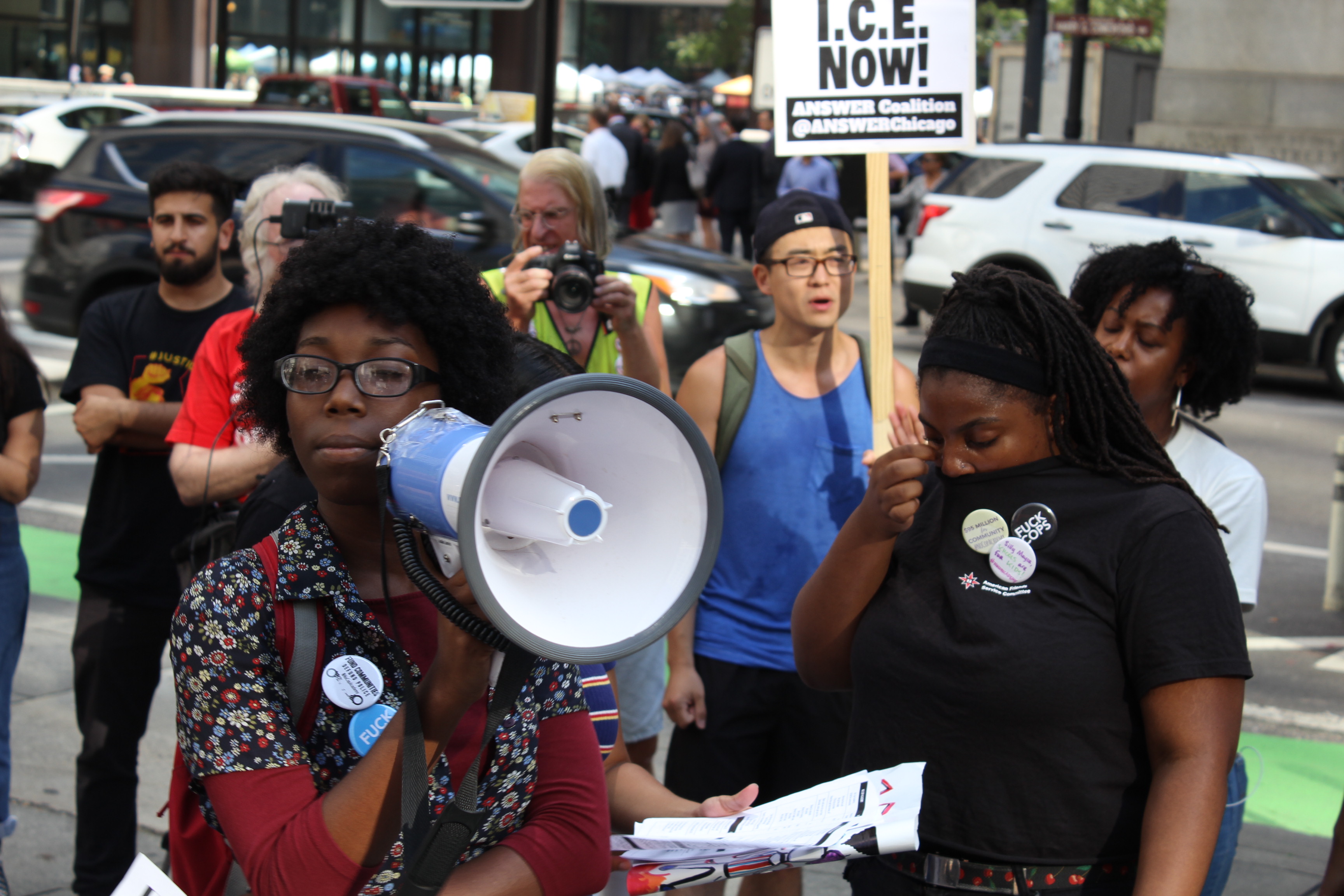 More than 75 people gathered at Chicago’s Thompson Center Thursday afternoon to protest Immigration and Customs Enforcement (ICE) and call for its abolishment.

Protests against ICE have come to the forefront of the media due to widespread criticism of the Donald Trump administration’s “zero-tolerance” policy against illegal immigration, which resulted in the detainment of more than 2,500 children separate from their families. This is the latest in a string of protests against the practice since it became prominent earlier this summer.

ICE wasn’t the only agency being criticized at the rally. Defunding the Chicago Police Department (CPD) was a common theme represented in chants and on signs. Reyna Wences, an organizer with Organized Communities Against Deportations (OCAD), addressed the crowd with this in mind.

“We want to hold all agencies accountable,” she said. “We know they’re all connected.”

Wences also said the city spends too much of their budget on CPD resources. While addressing the crowd, she said around 40 percent of the city’s budget is spent on CPD.

CPD has been criticized lately due to the fatal shooting of Harith Augustus in July and Mayor Rahm Emanuel’s announcement that the city would spend $95 million on a new police academy. Protesters called for that money to be reallocated to education, health care and job creation, specifically on the South and West Sides, where violence is most prevalent.

Around 10 CPD officers were present at the rally.

Protesters chanted and sang as they made their way from the Thompson Center to City Hall, showing their enthusiasm through chants like “Don’t need ICE, don’t need police, we are the ones who protect our streets,” and “Libre nuestra familia” — “Free our families” in Spanish.

Another chant, ’16 shots and a cover up,’ referenced the 2014 fatal police shooting of Laquan McDonald. Emanuel, CPD Chief Eddie Johnson and Alderman Tom Tunney are all believed to be involved in covering up McDonald’s shooting, according to a member of the Civilian Police Accountability Council (CPAC), who spoke at an August 2 protest which shut down Lake Shore Drive..

Along with Emanuel, Governor Bruce Rauner was called out in a speech from an organizer.

“Black and brown communities are under attack and our governor and mayor don’t push for real change,” he said, addressing the crowd.

Erika Husby, 26, said she attended the protest to support communities who want to protect themselves from discrimination and deportation. She said she encourages others to get involved with organizations like OCAD, Mijente and No Cop Academy to support the cause.

“There’s a lot of work that’s already going on in Chicago so this is just a continuation,” Husby said. “People have been doing things like what [OCAD] does, which is get people out of detention and educate everyone about their rights.”

The protest was peaceful and no arrests were made.

EDIT August 27th, 2018: In a previous edition of this article, sources regarding Tom Tunney’s involvement in covering up the McDonald shooting were omitted. They have been added.

Is Chicago Really a Green City?