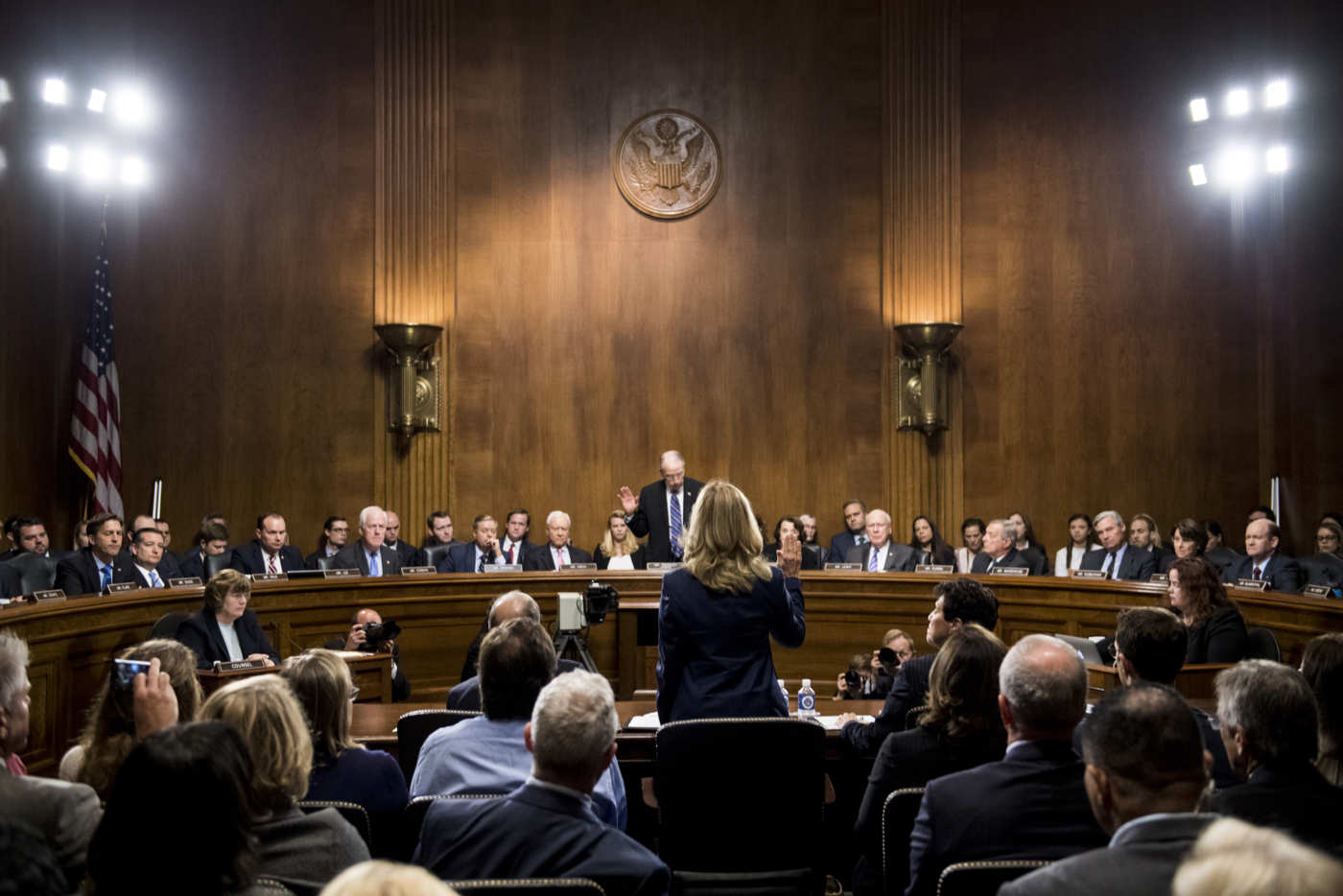 The iconic photograph of Christine Blasey Ford swearing her oath in front of an almost entirely white male Senate Judiciary Committee is perhaps the emblematic image the #MeToo movement has been trying to articulate.

Ford had to relive her traumatic sexual assault while testifying against Supreme Court Nominee, Brett Kavanaugh, on national television. All the while, thousands of women, listening and supporting her testimony, also had to relive their own traumatic experiences.

The Republican Senators heard what they wanted to hear from Ford’s testimony, but they didn’t listen. How could they have listened to hours of an intimate testimony from a woman who clearly did not want her traumatic experience exposed on national television to be analyzed and re-victimized by the public, and conclude that she was lying?

They believe her. Many of them, including Kavanaugh have admitted that they believe her in some capacity. What they don’t believe is that Kavanaugh’s actions culminated in a sexual assault that night. They are choosing to believe his actions in high school and college did not result in a sexual assault solely because of his apparent success as a lawyer, father, and Christian today. Republican members of the Senate Judiciary Committee chose to believe the events that transpired in 1982 night were too long ago and too disillusioned under the influence of alcohol to be classified as sexual assault. However, as survivors know, the effects of an assault don’t go away after thirty-six years, nor are they absolved of harm by the influence of alcohol.

At this point, it is not an issue of believing Ford or not. Those who do not “believe” Ford’s experience do not understand the reality or the effects of sexual assault. Utah Republican, Orrin Hatch’s comments during a break from the testimony on Thursday calling Ford an “attractive woman” and “pleasing witness” sum up the perspective of an entitled man completely misunderstanding the severity and plain reality of sexual assault and harassment.

Our culture has given the benefit of the doubt to the drunken teenage boy accused of sexual harassment or assault far too many times. Now, this scenario has reached the highest level of severity and with it unveiled the abhorrent treatment survivors must endure after an assault and the extent to which male entitlement can dominate our collective moral conscious.

To the Republican Senate Judiciary Committee, this isn’t a case of sexual assault, it’s a game of power. Unfortunately, women have had to relive their assaults in front of juries and cameras in a desperate attempt to dismantle this power.

Trump, like many other Republicans, saw Ford’s decision to not report Kavanaugh at the time of the incident and her reluctance to testify publically, as a weakness to undermine her credibility. This interpretation of reluctance articulates a gross misunderstanding of the effects of sexual assault. Since Ford’s decision to testify, many survivors have publically written about their own reluctance and fears of reporting their abusers. The hashtag #WhyIDidntReport exploded on twitter, as survivors shared their reasons why they didn’t report their abuse.

The Republican senators are able to rationally choose and legitimate Kavanaugh’s defense because he has painted himself as the victim and the structures of our political system have helped him do so. Instead of providing evidence of his affairs during the alleged assault, Kavanaugh appealed to the ethos of his audience in a series of seemingly unrelated topics ranging from his love of coaching basketball to his female friend’s affirmation of his good character.

His angered and outrageous response is predictable considering the privileges he has been brought up with. To have his “good” name desecrated on national television is completely contrary to the life of entitlement Kavanaugh is used to.

It is important to remember that this is a job interview for one of the most significant positions in the country. It is not a court case, in which the jury is required to determine if Kavanaugh is guilty or not. This about Kavanaugh’s character. There are plenty of other individuals would are just as qualified and do not have multiple accusations of sexual assault against them. But the judiciary committee has made it a point to defiantly delegitimize the severity of sexual assault accusations for one of the highest positions in the country.

As the private experience of sexual assault, often encoded in power dynamics, enters into the public eye, it has become an issue of retaining power rather than addressing the incident as a sexual assault. The Kavanaugh fight is a call for us to support of survivors, as they use their trauma to dismantle the systems of patriarchal power. It is because of brave women like Ana Maria Archila and Maria Gallagher, the two women who confronted Sen. Flake with their sexual assault stories, that I have hope in the women of America to transform this system