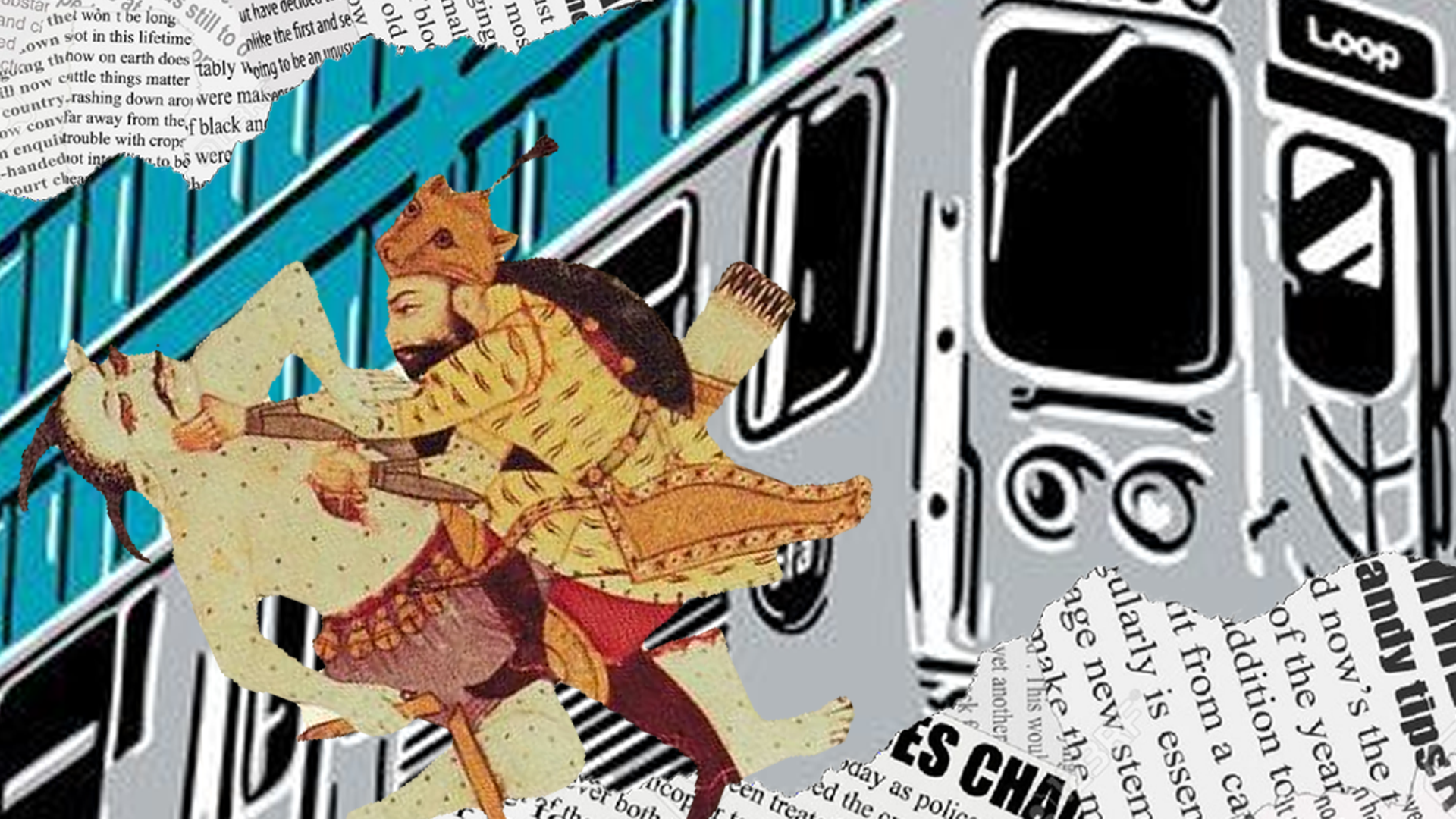 It has been thirty years since the “Rushdie affair” when the Islamic revolutionary Ayatollah Khomeini, then the Ruhbar (leader) of Iran, issued a fatwa declaring it licit and an imperative to shed the blood of Indian author Salman Rushdie for blaspheming the Prophet Muhammad in his novel Satanic Verses. I was only five years-old when it captured headlines. I have no memory of the events that shook and enraged so many then, becoming an indelible signpost within the narrative history of controversies over a so-called “clash of civilizations” between East and West. Everything I learned about it came after, as my consciousness matured and a creative impulse awakened. The essay by Columbia University professor Hamid Dabashi, however, prompted me to share my own experience as a reader of Rushdie, a lover of literature, and a first generation Pakistani-Muslim-American growing up and coming of age in 1990s Chicago.

No one has yet written THE story I want and need to read, and as the sage-author Toni Morrison famously advises, “if there’s a book that you want to read, but it hasn’t been written yet, then you must write it.” I haven’t yet written that story, but I know that one day, when I do, it will be influenced by Rushdie’s writing — mostly his early work.

His recent work such as the novel Two Years Eight Months And Twenty-Eight Nights exemplifies much of just exactly where and how his writing in the years since he’s been freed has taken a turn for the worse. At risk of presumptive metaphysical license: it’s as if the darkest shadows that drove him into captivity didn’t only victimize him but lingered, and drive a passion for what one reviewer has described as “personal revenge.” Of course, the need for revenge doesn’t require a metaphysical explanation it is perhaps a normal psychological reaction to victimization and powerlessness that when one is freed and in a position to do so they wish to “kick ass and take names.” I will return and delve a little deeper into this theme below but I begin by mentioning the inspiration I get from Rushdie.

Common themes in Rushdie’s work: magical realism, in-betweenness of culture, hyphenated identities, mythologies (religious and otherwise), colonization and its ramifications, and good old love, hate, sex, and violence are all topics that resonate and inform my own writing. Hyphenated identities in particular have increasingly become targets of an obsessive, conservative derision which views them not only as threatening but as exemplifying the confusion and excesses of post-modern identity politics. There are excesses, we can’t forget that there are lower and upper case “t/Truth(s),” and yes, everything isn’t relative or a social construction. But this applies to hyphenated identities as well. They are real. They are true. I don’t know anyone, no matter how obstinate about a single, exclusive (or favored) identity, who isn’t hyphened. All of us have mighty rivers of identity cutting through us, taking different courses, meeting, merging and separating at different points. Some of these rivers are more desired than others, some may feel imposed but all of them are real; the waters of identity are uncontrolled and sometimes “walk the earth with a heavy heel” as Zora Neale Hurston wrote about the Okeechobee Hurricane of 1928.

The obsession with having a single identity to the erasure of all others that is so readily visible among bigots is the product of: constriction, narrowness, malady, discomfort with paradox, and the inability to hold “two opposing ideas in one’s mind at the same time.” An ability which according to F. Scott Fitzgerald is the sign of “a first-rate mind.” The best of Rushdie’s writing, the earlier novels, is when he was closer, proximate with the themes mentioned above which he relayed brilliantly and comically in his unique style. Such writing opens up the spirit, making it receptive to challenge and forms a generous and creative disposition. The worst writing reveals a distance and lack of familiarity with the aforementioned and is a product of the constricted disease of bigotry, affirming simplistic binaries of good vs. evil. So, it is shocking when one considers that the enemies and dark forces of the imaginal worlds and landscapes Rushdie creates are the same ones to which he has so often ironically succumbed. After re-entering the public sphere, he supported the invasion of Afghanistan and Iraq (he later changed his mind on Iraq), regularly dehumanizes and generalizes whole nations like Pakistan. But maybe being in hiding for a decade with threats of death will do that to you.

When I began reading Rushdie during my freshman year at Lane Tech High School it was precisely because I had heard that he was taboo, dangerous, and a slanderer of Islam. And of course, the first book I wanted to read was Satanic Verses. I remember thinking naively then what could be so dangerous about a book. Why would people want to kill him—over a book. Our home was filled with books, and my parents never questioned or prevented me from reading anything. It didn’t make sense. I was also immature in my faith, so it came as a revelation that an episode known as the ayāt shayṭāniyya (satanic verses) was a part of Islamic tradition, albeit contested. Not only was it a part of our tradition but its scandalous nature (in modernity) seemed to put into question the claims of the foundational dogma I had grown up with; the infallibility of the Prophet Muhammad.

I checked out the red, black, silver hardback copy from the Rogers Park Branch library and was excited to crack its pages open. The front cover illustration had two, what appeared to be, wrestling demons falling through the air. It looked like an ancient relief or miniature, the title’s font with its Arabic style and diacritical marks appealed to my calligraphic-graffiti hip-hop tastes and even before reading a page I was even more intrigued.

This was pre-internet, there was no Google to search reviews, wiki details on historic events, I was untainted by pre-judgement about the author or his art. I read this tome, day and night, on the 49 Western bus, in between classes, during lunch, before sleeping—I read. It was what reading is for many of us, an escape but it was also an immersion into an imaginal universe: unwieldy, incomplete and unbounded. It opened the doors for Borges, Gabriel Garcia Marquez, Arundhati Roy and so many more. I thought “one can write like this.” Irreverent, unfiltered, leaving the words of Urdu and Hindi hanging in-between English words, two worlds side-by-side living uneasily, awkwardly next to one another, separate but inseparable, in harmony and sometimes anglicized or Indianized.

Reflecting now, I recognize that despite the similarities in our histories and experiences differences abounded. Rushdie was born in Bombay, the first generation after partition, grew up in India and moved to the UK where he immigrated as a young adult. I on the other hand was born in Chicago to parents who had undertaken a journey similar to his. But my family came from a traditional, Punjabi background. I wasn’t raised secular, my father didn’t hit his nose on the ground like Aadam Aziz in Midnight’s Children while praying on a frosty morning causing three drops of blood to drop from his nose onto the prayer mat “transformed into rubies,” vowing never to pray again. Like it was for my parents, the touch of earth kissing my head felt good, I was in need of God and the Qur’an definitely sung to a cosmic horizon deep in my soul.

Reading Satanic Verses, it wasn’t all inspiring, I definitely felt antagonized, and the chapter that ensues after the character Ferishta falls into a feverish dream state “Mahound” certainly hit a nerve. Mahound is a demon in the Latin tradition, he occupies the lowest hell in Dante’s Inferno, and Rushdie’s Mahound while the vision of a sick mind, seemed too close for comfort, resembling, twisting and borrowing selectively with artistic license where it pleased from the biography of the Messenger, eliding Muhammad and Mahound.

Mahound’s intentions weren’t sincere, on top of it he’s a gullible idiot easily swayed by greed, lust and desire for women, unable to discern falsehood from truth, and with a character informed by the banal transactional and immoral nature of his profession as a trader leading caravans—he is in some ways no better than a pimp. When he’s visited with revelation, verses to recite, it isn’t the Angel Gabriel of revelation but Ferishta. Rushdie’s Mahound is the evil doppelgänger of Muhammad. He is the opposite of the Prophet one comes to know in the sources of Islam or the verses of Sufi mystics such as Sultan Bahu and Shah Abdul Latif, in which his historical person is as late scholar of Islamic mysticism Annemarie Schimmel noted about Indo-Muslim mysticism “totally eclipsed behind a veil of light,” the epitome of the perfect human and the reason for the existence of the universe itself—the solar king.

I understood the anger of fellow Muslims who felt Rushdie was not so subtly attacking Muhammad and Islam. There was more in the anger and violence that ensued than what Dabashi describes as a “comedy of terrors,” and others as simple misunderstanding by people who never read the book. To deny it is to do a disservice to the truth and also the point Rushdie was trying to make about religion. However, there are so many degrees of separation between the real Prophet and the fictitious Mahound that the accusation that he was blaspheming the Prophet doesn’t hold up. No matter what Rushdie may have been saying about religion and the nature of belief or what he has said since, Mahound was after all just a character in a fiction novel who isn’t even real in the novel but rather the imagining of the feverish dream of a sick mind.