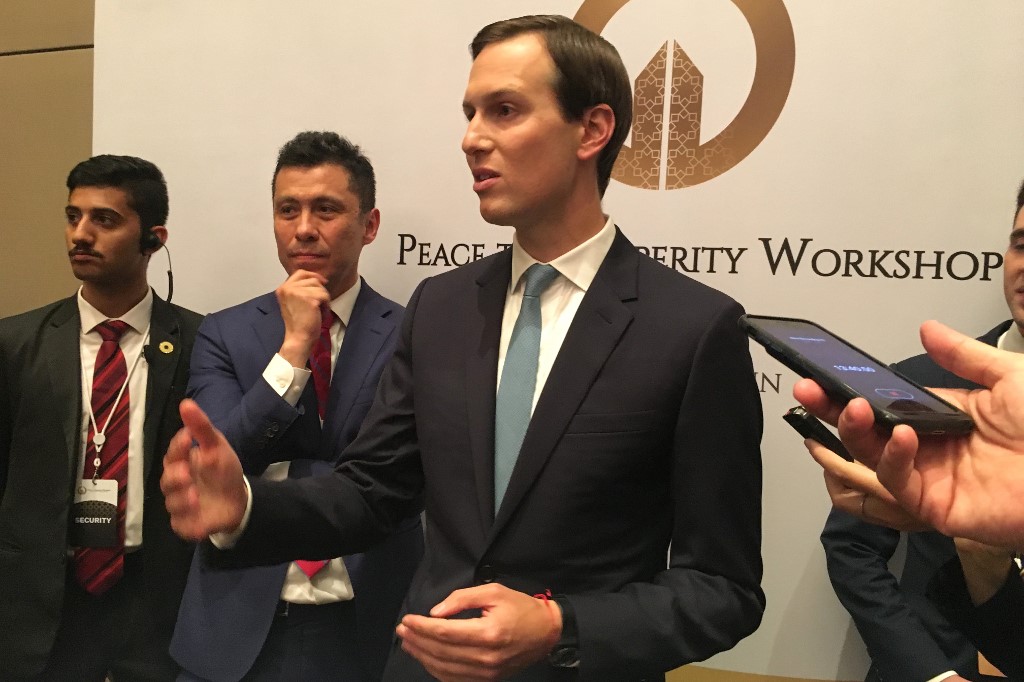 When does it become ok to say, enough is enough? This is a question lingering through the minds of many Palestinians in response to the new plan the Trump Administration has created in preparation for enabling economic change in the Middle East in the Israeli and Palestinian Regions.

Jared Kushner, Senior Advisor to the President of the United States, stated that the proposed 50-billion-dollar investment fund would be “the opportunity of the century” at the Peace To Prosperity Workshop hosted in Manama, Bahrain. The money would primarily come from other Arab nations and it would be used to fund 179 infrastructure and business projects in the hopes of creating a better and more peaceful Middle East. The 10-year plan would allocate money towards education systems, healthcare, electrical power systems, and other infrastructure ventures that Palestine, and Palestinians in other countries like Egypt, Jordan, and Lebanon, will need.

The economic plan is 40 pages long, claiming the steps are clear and concise. It proposes a 3-step process for improving the current conditions in Palestine. Step 1 is the first initiative: a plan to improve Palestine’s economic infrastructure as a whole, ranging from creating new policy to ending the unemployment crisis. Step 2 is focused on enabling the Palestinian people to develop self-empowerment by investing in new vocational education systems and cultural centers focused on boosting morale and academic achievement. Step 3 revolves around developing business and economic policy, along with implementing a fair and sound judicial branch for the governing power of Palestine.

In these 40 pages of the proposed plan, however, are rather ambiguous descriptions of  infrastructure changes. The plan is excellent in the ideological sense, but it has no clear explanation on how finances will be properly allocated amongst these groups of peoples; nor does it specifically detail who is going to be holding accountability of fulfillment during the process. The 10-year mission, in the simplest terms described by the Trump administration, is to boost the underrepresented country to thrive economically.

Officially, the report has not addressed the current military blockade imposed by the Israeli government, nor does it address the occupation of illegal Israeli settlements on Palestinian soil. It also has not addressed whether Israel will allow Palestine to enable economic independence of their own stature, such as enabling Palestinians the authority to construct properties without facing prohibition policies installed by the Israeli government. Israel is only mentioned 6 times in the plan, only in relation to neighboring countries that stand to benefit from infrastructure investment. The neglect of addressing these political issues effecting the Palestinian society, at hand, is having its repercussions.

Already, the Palestinian people have responded—rallying by the thousands against the plan, from what has been reported by Al Jazeera and Reuters. None of these issues regarding the protests were brought to light on Tuesday’s conference, led by Kushner himself. His insight is simple, if Palestine can become more marketable to investors, then it can thrive and have an economic prowess of its own.

“Economic growth and prosperity for the Palestinian people are not possible without an enduring and fair political solution to the conflict, one that guarantees Israel’s security and respects the dignity of the Palestinian people,” a statement made by Kushner during the conference. However, what is unfair is the insistent idea that Palestine cannot thrive without assistance from the United States.

The Palestinian Authority has boycotted the event and has formally rejected the plan, as they feel the United States Government is making a blatant attempt at “liquidating the Palestinian cause.” There is a strong sentiment that the Trump administration is offering a bribe for obedience instead of a true solution to their problems as a government.

“What has been missing all of these years is pressure on Israel to actually let us be free. They’ve (The U.S.) recycled the same concepts, repackaged them but what they’re not willing to do is take on Israel. And that’s the one issue that’s going to set us free – it’s getting Israel off of our backs,” Diana Buttu, a Haifa-based analyst and past legal advisor to the Palestinian peace negotiators, stated in response to the proposed plan.

For many Palestinians, the issue in their society isn’t economic stability, or the notion that Palestine is incapable of obtaining the means to have stability. It is the continued occupation by the Israeli military that deters the health and stable function of their society. It is the belief of many Palestinian leaders and analysts that the immediate removal of the Israeli occupation is the fundamental factor in instilling true societal change for the Palestinian people.

“Palestinian Economy isn’t faltering because of a lack of investments, but due to the occupation,” analysts say. An event catalogue, conducted by Human Rights Watch, stated that between March 30th and November 19th of 2018 the Israeli Security forces killed 189 Palestinian demonstrators, including children and medical workers, and wounded nearly 6000 with live fire. The violence escalated to Molotov cocktails and incendiary materials being used in response. The Israeli government also launched air strikes on Palestine, killing 37 Palestinians, in this same span of time, prompting the armed Palestinian forces to respond with over 1000 rockets being launched toward Israel.

Unfortunately, on both sides, most attempts on addressing these issues amongst Israelis and Palestinians have been dismissed or met with force. Recently, in May of 2019, four demonstrators in Gaza were killed during an annual Peaceful Great Return March, fueling conflict on both factions. The violence between Israel and Palestine is a matter that should not be dismissed behind the guise of bureaucracy and Western foreign policy. These efforts perpetuate inequality and propose we should fix a government with finances instead of discussing why these issues exist in the first place. Without equal representation, Palestine is doomed to fail.