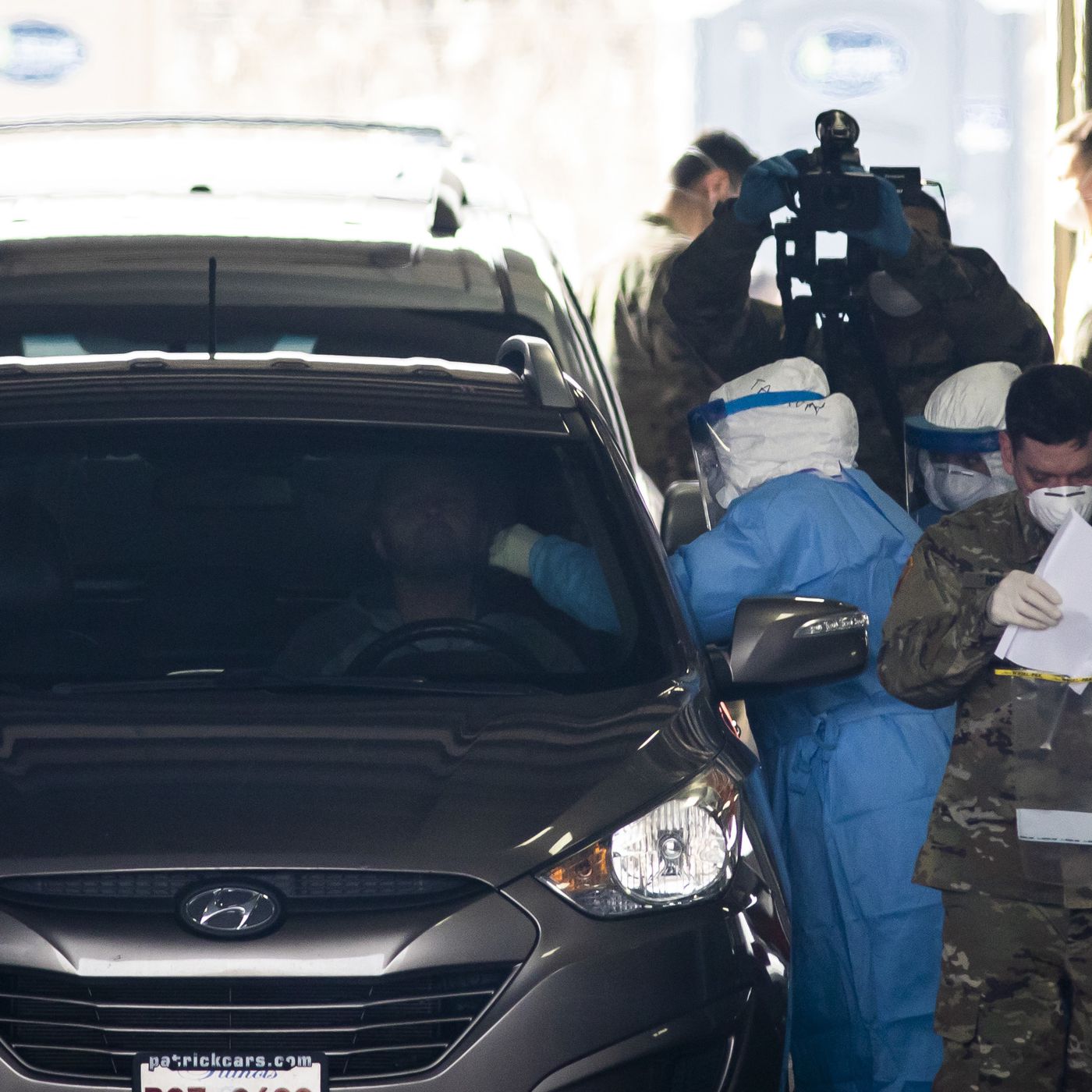 As the new coronavirus spreads rapidly across Illinois, officials looking to curtail the reach of the deadly disease have rushed to expand the state’s capacity for testing.

While state officials, health care providers and even major retailers were all administering tests on Tuesday, not everyone can get one yet. During a Tuesday press briefing, Gov. J.B. Pritzker touted the state’s expanded testing efforts but made it clear that more must be done to “understand the scale and severity of the outbreak.”

Within two weeks, Pritzker said hospital and university labs are expected to process an additional 2,805 tests each day, bringing the daily total to more than 4,300 tests.

The number of drive-thru sites in Illinois has risen so fast in recent weeks that even Danny Chun, spokesman for the Illinois Health and Hospital Association, said he’s having a hard time keeping track of them.

Though Chun warned that a shortage of testing kits and the materials needed to process them will continue to limit the scope of testing, the number of tests administered in Illinois has skyrocketed in the past week — along with the number of confirmed cases.

In the past week, 9,985 COVID-19 tests have been administered throughout the state, or around 1,426 a day. That’s way up from the preceding weeks, as the virus first started to take hold in Illinois, when only 1,500 tests in total were processed.

Many more qualify for tests

Over the past month, the Illinois Department of Public Health has continued to scale back the prerequisites for testing, meaning more people qualify than ever now.

Patients initially qualified for testing by making contact with an infected person or traveling to an area hit hard by the virus, like China or Italy. Now, the department calls for the testing of hospitalized people with “unexplained pneumonia” and those living in congregate living facilities, like nursing homes or jails, where two or more possible or confirmed cases have appeared.

On top of that, people who don’t meet those criteria can be tested at commercial or hospital labs with a doctor’s approval, according to the IDPH.

Testing has expanded, but capabilities are still limited

After receiving an order from an in-network doctor, patients can now get tested at drive-thru sites at Northwestern Memorial Hospital, the University of Chicago Medical Center, Rush Oak Park Hospital and the parking lots of the corporate headquarters of Edward-Elmhurst Health in Warrenville and NorthShore University HealthSystem in Skokie. Those sites are also testing staff members, as is Rush University Medical Center.

“We’re not doing a ton,” said Hartenberger. “At first, it’s just to get an idea of where we are and we can adjust accordingly.”

Meanwhile, Roseland Community Hospital is primed to start conducting tests on Wednesday, but only individuals with a doctor’s note who are registered in its system will be able to get one. Cook County Health is also in the process of setting up drive-thru testing for employees of Stroger and Provident hospitals.

Hospitals in the Cook County system are currently testing patients who qualify after being screened, regardless of whether they have insurance, according to spokeswoman Deb Song.

“Cook County Health is one of the largest public health systems in the U.S. and our mission, which is more than 180 years old, is to treat all patients regardless of income, insurance, immigration status or social situation,” said Song.

Patients seeking a test at facilities in the Cook County network should call ahead, Song said. Those with a physician or health care provider in the system should first consult with them.

Patients seeking a testing order at other hospitals should also consult with their physician or hospital network, either online or over the phone.

Innovative Express Care, 2400 N. Ashland, is also requiring patients to submit to a telephone screening before they can be tested. Unlike hospitals in the area, those seeking tests at the clinic don’t need to be a part of a specific health care network to be treated.

As of Monday, 24 of the 175 patients tested for COVID-19 at the urgent care center were positive. On Tuesday, a tent was set up outside the office “to allow clinicians to keep up with the growing volume of patients and safely test those who may have COVID-19.”

Walmart and Walgreens also started testing health care workers and first responders at federally supported sites outside stores in the Chicago area over the weekend. Walmart’s drive-thru sites are located in Joliet and Northlake, while a Walgreens in Bolingbrook is also doing testing.

Pritzker said those sites can currently conduct around 100 tests a day, and each could run roughly 250 daily tests “with expanded staffing.”

A line of cars swarmed the new site on Monday and Tuesday, though only 250 people can get tested each day.

Widespread testing won’t start for ‘weeks, if not months’

Despite the added testing sites, the capacity for running those tests remains limited as the lingering supply chain issues continue to stymy more expansive efforts.

Advocate Aurora Health on Friday announced it was pausing drive-thru testing at 19 sites in Illinois and Wisconsin due to the national shortage of testing kits. The move to “conserve tests for those in critical need” came after health care workers at Advocate Lutheran General Hospital in Park Ridge had started administering drive-thru tests.

Chun, from the state’s hospital association, said “there’s still a bottleneck in the supply chain” that’s hindered hospitals’ ability to ramp up testing.

“Hospitals are ready to do it but they’re hamstrung by the supply issue,” said Chun. “The [federal government] keeps promising these test kits every day, every week. For weeks, they’ve been saying ‘Okay, they’re on their way.’ And then we don’t see it.”

Recently, some private companies that have received emergency approval to manufacture testing kits have also started to make big promises.

Abbott Labs, headquartered in Lake Bluff, announced last Wednesday that 150,000 tests were immediately being sent out to existing customers. In a statement, Abott vowed to “continue ramping up production to the highest levels possible, with the goal of providing up to 1 million tests per week.”

On Saturday, California-based Cepheid said its newly approved test — which offers results in just 45 minutes — would start shipping this week. But David Persing, the company’s chief medical officer, told Stat News on Saturday that the test isn’t “for the worried well” and shouldn’t be used in doctor’s offices.

Roche, a major health care company headquartered in Sweden, has distributed around 400,000 tests in the past week, the company’s CEO Severin Schwan told CNBC on Monday. As of Tuesday, just over 350,000 people had been tested for the coronavirus across the country, according to The COVID Tracking Project.

Based on the current supply, Schwan said only high-risk patients and those with signs and symptoms of infection should be prioritized for testing. He predicted that it could take “weeks, if not months” for widespread testing to start in the United States.

Cars wait in line for a COVID-19 drive-thru test site for medical personnel and first responders operated by the Illinois National Guard on Tuesday, March 24, 2020 in Chicago. Ashlee Rezin Garcia/Sun-Times

“Ideally we would have broader testing,” said Schwan. “But at the moment, capacities are limited.”