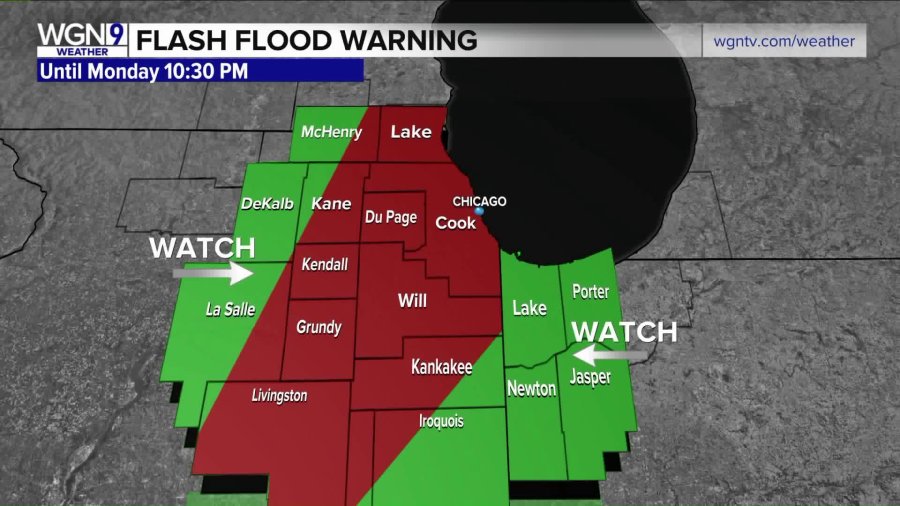 CHICAGO — A Flash Flood Warning has been issued for a large part of the Chicago area through 10:30 p.m. Sunday, according to the National Weather Service in Chicago.

According to the NWS, Doppler radar indicated showers and thunderstorms were producing very heavy rain across a large portion of the Chicago area, encompassing parts of Will and Cook counties, around 4:30 p.m. Sunday.

Due to huge 2- to 5-inch rainfall totals we received in the 2-day storm that ended just two days ago, soils were already saturated with rainfall and many rivers were already near bankfull or in flood Sunday afternoon.

Around two to three inches of rain fallen in the past three hours over areas included in the Flash Flood Warning, prompting reports of street flooding.

Flash flooding is expected to begin shortly in those areas, which could include flooding of small creeks and streams, urban areas, highways, streets and underpasses as well as other drainage and low lying areas.

The NWS warns drivers to “turn around, don’t drown when encountering flooded roads,” as most flood deaths occur in vehicles.

Up to three inches of rain has already fallen, and another one to two inches are on the way this evening. Some roads and highways may become impassable.

Low pressure extending high into upper levels will move slowly east across Iowa into western Illinois allowing mild southerly moisture-laden air from the Gulf of Mexico to flow into our area while the very cold air aloft will sustain very unstable conditions maintaining waves of strong storms producing occasional heavy downpours during the next 24 hours.

Severe storms will also be possible under these synoptic conditions with the National Storm Prediction Center placing our area in a Marginal to Slight Risk of severe storms.