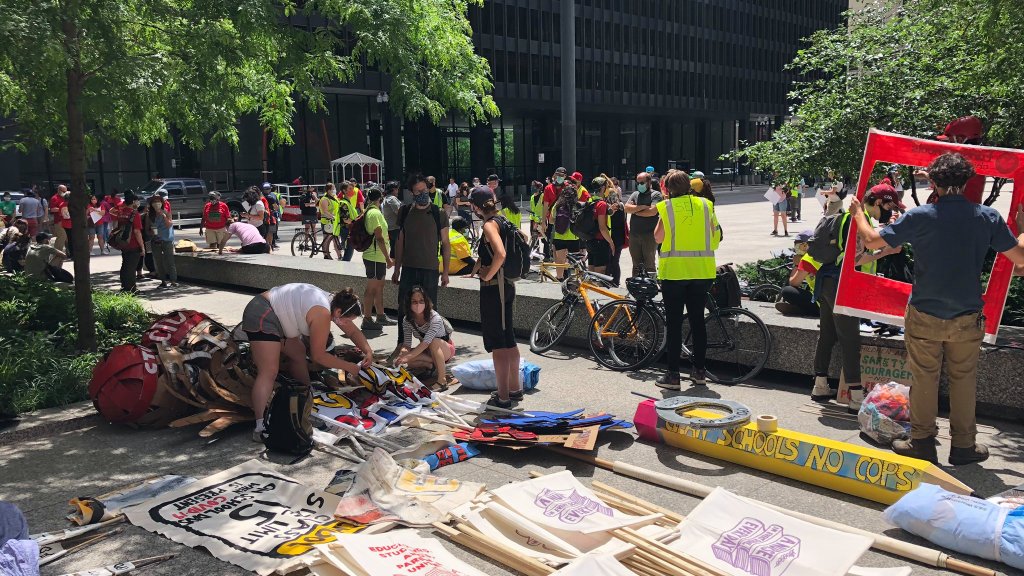 CHICAGO (CBS) — By a narrow vote Wednesday afternoon, the Chicago Board of Education rejected a bid to remove Chicago police officers from dozens of schools.

By a 4-3 vote, Mayor Lori Lightfoot’s hand-picked board voted down a motion to terminate a $33 million contract with the Chicago Police Department to provide more than 200 school resource officers and staff sergeants at 72 high schools.

Board member Elizabeth Todd-Breeland, who presented the motion to terminate the CPD contract, had argued “The presence of SROs fuels and perpetuates the school-to-prison pipeline, particularly for Black students.”

“There is a well-documented history of police misconduct, abuse, violence, and disregard of human dignity and Black life. In addition, recent incidents of police violence against Black people across our country, and in our city, are in direct conflict with the values of the District and require us to take action,” Todd-Breeland’s motion stated.

However, Lightfoot and Chicago Public Schools CEO Janice Jackson have said it should be up to elected local school councils to decide if individual schools should keep officers on campus.

“I don’t believe that a top-down mandate makes sense in this situation, and I share publicly that my views, my personal views on this, continue to evolve, but I also want to make sure that we do the right thing,” Jackson said before the board’s vote. “If this were an easy issue, and cut and dry, we wouldn’t be spending so much time on it today. There are just a lot of people who have different views about it.”

Jackson said she didn’t want the board to rush into any decisions on having police in schools without first consulting local communities.

“In the case where a local school council does not want a police presence in their schools, we will remove them,” Jackson said, but she said she would also back any schools that want to keep police officers on campus.

Board President Miguel Del Valle, who voted against the bid to terminate the CPD contract, recalled being beaten by gang members in front of his school when he was a student, “and having no one come to my assistance.”

Del Valle also argued that, while protesters demanding the removal of police from schools have been very vocal in recent weeks, he believes supporters of keeping police in schools haven’t been heard.

“Safety is of the utmost concern of all of us,” he said. “Both sides are right, and so the question is how do we take what’s best from both sides, and what’s needed and essential for both sides, and bring it together in a way that it effects positive change, the kind of change that’s necessary? And that’s what we’re looking for.”

“There’s more that needs to be done, and we need to do it together. It’s not all one or all the other,” he added.

“PPE NOT CPD”
“Counselors, not Cops”
“Clean Schools No Cops”

Chicago Teachers Union rally happening now at Federal Plaza. It comes as a the school board discusses motion on removing CPD from schools. @cbschicago pic.twitter.com/GPA1AUlhS2

Hundreds of protesters and Chicago Teachers Union members marched outside Wednesday’s board meeting,

Protesters held signs reading “Counselors, Not Cops,” “PPE Not CPD,” and “Police out Parents in.”

During the meeting, CTU President Jesse Sharkey urged the board to terminate the CPD contract, arguing having officers in schools doesn’t make students safer.

“Instead, police in schools criminalize youth behavior, and unnecessarily subject disproportionate numbers of students of color – and Black students in particular – to police, courts, and incarceration,” he said.

He also argued the board should not “hide behind” the argument that local school councils should decide whether or not individual schools hire school resource officers.

“You know as well as I know that the contract between the CPD and CPS is a centrally-approved contract. Local School Councils are not offered the resources to decide what to do with them,” he said. “What we really need are youth intervention specialists, counselors, and an understanding that goes beyond punishment and doing harm.”

Rev. Marvin Hunter, the great uncle of Laquan McDonald, pointed to his nephew’s murder by Police Officer Jason Van Dyke as proof “police, in their regular capacity, do not have the capacity to understand children, nor are they trained in that way.”

“I think that a rethinking of how we have resource officers in the school would be a wonderful thing to do,”

While Hunter said he believes some schools do need school resource officers for security, he believes police need more training to fill that specific role than they currently receive.

Taliaferro, who chairs the City Council Public Safety Committee, said several principals and students in his ward want to keep police on their campuses. He also said, while he agrees schools need more social service resources, he doesn’t believe it should come at the expense of security provided by police.

“I understand and support the need for more school counselors, more social services, and more mental health professionals within our schools. That’s a fight that our communities must win for our students,” he said. “We cannot sacrifice one security measure for another. It has to be, it has to be both.”

Taylor, however, noted that more than 95% of police incidents at CPS involved students of color in last three years. An LSC member, and mother of four CPS graduates, she demanded to see data on how many LSCs have actually voted to keep police officers in their schools.

CPS Chief of Safety and Security Jadine Chou agreed school security measures need to evolve. She said CPS still has a long way to go, but “we feel like we’re making progress.”

Chou acknowledged that there wasn’t sufficient oversight of the school resource officer program in the past, but she said the district has responded to concerns, and imposed new rules in the past year. For instance, principals now have a say in which specific officers will be hired at their schools, officers are prohibited from any involvement in school disciplinary issues, and officers are required to complete a 40-hour national SRO training program, and an 8-hour Chicago-specific SRO training program.

The district also has implemented a formal complaint process. In the past complaints against SROs went directly to police districts; now CPS has centralized the complaint process to keep its own records, and requires all complaints to go to the Civilian Office of Police Accountability, which investigates claims of police misconduct.

Chou also said the district recently conducted survey of students, parents, teachers, staff, administrators, and neighbors at schools with SROs. She said, according to that survey, the vast majority of people with direct ties to schools with SROs believe the officers help keep the school safe.

According to Chou, 66% of students, 64% of parents, 64% of teachers and staff, 88% of administrators, and 69% of LSC members agree officers help keep schools safe, while 85% of neighbors disagree.

Chou said next school year the district will provide LSCs with “toolkits” to help decide whether to keep SROs. LSCs also will be required to vote on SROs before classes resume in the fall, but can revisit that decision at anytime during the school year. LSCs also must notify their communities and encourage them to participate in a discussion on SROs.

“Police do not belong in our schools. This is a systemic issue, and it’s a civil rights issue, and it’s our responsibility to dismantle, not reform, the school-to-prison pipeline,” she said.

She noted Black children account for less than 36% of CPS students, but account for nearly 66% of notifications to police over last six years.

Todd-Breeland pointed to the case of Marshall High School student Dnigma Howard, who was shoved down a set of stairs and tased by police last year, as an example of why police officers should be removed from schools. Officers

Police officers were asked to escort the 16-year-old girl out of Marshall  High School on Jan. 29, 2019, following a confrontation with a staff member.

Surveillance video shows Dnigma starting to walk away from one of the officers when he grabs her and forces her towards the stairs.

Video from the floor below shows Dnigma and the female officer entangled on the stairs as the male officer appears to be dragging the girl down the stairs by one of her legs. Police say Dnigma tried to bite one of the officers. That’s when she says she was tased.

The family’s attorney has said the video shows the officers lied about what happened.

Dnigma had been charged with two felony counts of aggravated battery, but those charges were dropped a week later.

“This is a horrific case of police brutality, but it’s not isolated. It’s unfortunately systemic and endemic to the institution of policing itself,” Todd-Breeland said.

Board member Dwayne Truss, who voted against the bid to remove officers from schools, said the board needs to have continued dialogue about police in schools, and urged those who support removing police from schools to actually visit campuses that rely on them.

“It’s a great thing that we’ve got an evolution that’s going,” he said. “I wish that we had an environment here in Austin where we didn’t need school resource officers. I wish we didn’t have an environment where we’ve got many K-8 schools using school funds to pay off-duty police officers to come into the schools, but that’s what they choose to do, and that’s why I say let’s let local school councils make that decision.”

The board’s vote to keep police officers in Chicago Public Schools might not be the end of the debate. Several aldermen have backed an ordinance that would require the Chicago City Council to terminate CPD’s contract with the Board of Education.

However, that proposal has been sent to legislative limbo, after Taliaferro used a parliamentary maneuver last week to send the proposed ordinance to the City Council Rules Committee, where measures the mayor opposes are typically sent to languish without a vote.

Lightfoot, for her part, has denied playing any role in sending that ordinance to the Rules Committee.

“I think that matters of public interest should see the light of day, and there should be a vote,” Lightfoot said last week.