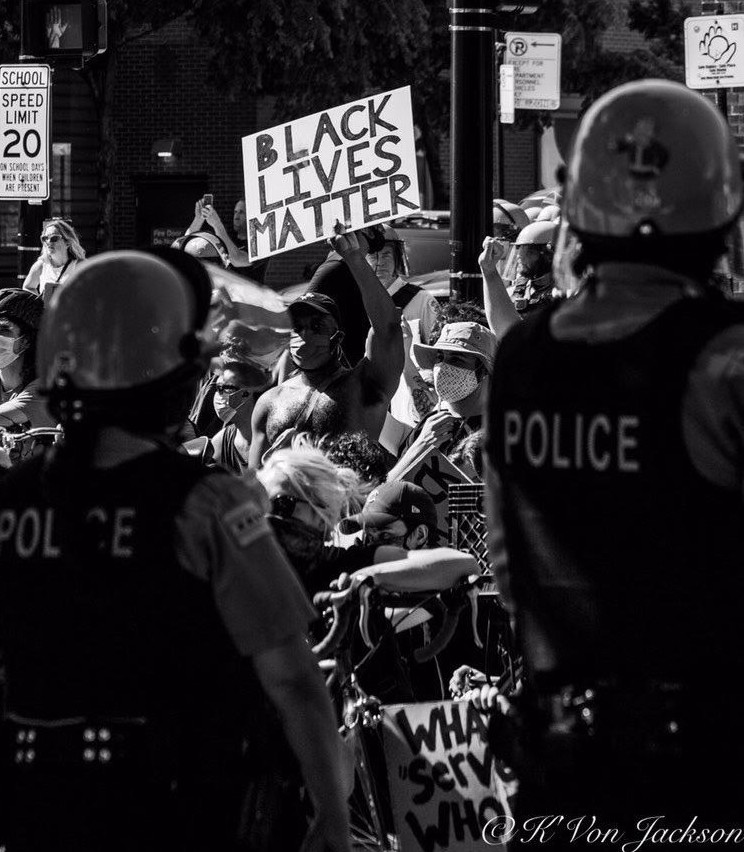 As #BlackLivesMatter protests occur throughout Chicago in response to the May 25 killing of George Floyd, Chicagoland school communities are increasingly calling for their institutions to cut ties with the Chicago Police Department (CPD) and join the nationwide movement to divest in the policing.

On Thursday, June 4th, CPS community members organized a protest under the slogan “Defund CPD Now.” In addition to divestment from CPD and the removal of officers from schools, the primary demands of the protest were to demand justice for George Floyd, Gerald Reed and Breonna Taylor, the creation of the Civilian Police Accountability Commission (CPAC), and the “release of all protestors.” Beginning at Lincoln Park High School, protestors peacefully marched almost 4 miles to the Chicago Police Training Division, then to the Juvenile Temporary Detention Center.

Jaden Gray, a CPS alum who attended the June 4 protest, believes that the CPD “cannot be reformed when it’s been known to originate in violence, racism, and hate.” Last Week Tonight host John Oliver echoed this sentiment while examining the history of systemic racism in policing, where he states that policing in the United States was “explicitly designed to subjugate black people.” Gray encourages those who fear the idea of defunding the police to “make a leap of faith” toward a system that supports “all communities, especially those that have felt the back hand of law enforcement.” Chicago Public Schools currently holds a $33 million contract with CPD.

A protest with similar demands was held on June 6, organized by the Chicago Teachers Union, the Brighton Park Neighborhood Council, the Arab American Action Network, and Students Strike Back. Despite continued calls for divestment and daily citywide protests, Mayor Lightfoot stated in a June 5 press conference that she will not commit to defunding CPD or terminating its contract with CPS.

University communities are calling for divestment in CPD as well. On Tuesday, June 3, For Members Only, Northwestern University’s premier Black Student Alliance, released a petition urging the Northwestern administration to “divest from and sever ties with EPD, CPD, and NUPD and invest in Black communities and experiences.” For Members Only and their collaborators argue that this is necessary to “ensure the physical and emotional security of Black students.” Although the Northwestern administration has yet to respond to this petition, it has support from over 265 Northwestern student organizations and more than 7,300 individuals. Those numbers continue to rise.

Similarly, DePaul University students and faculty have also called for the university to divest from CPD. In direct response to DePaul President A. Gabriel Esteban’s statement that the university will “continue to work with the Chicago Police Department as needed,” a petition to divest was released and has since gathered over 2,100 signatures. On June 10, DePaul Socialists and Students Against Incarceration (SAI DePaul) held to protest at the school’s Lincoln Park Campus. According to the protest’s description, DePaul describes itself as “a beacon of interracial solidarity, yet still profits off the prison industrial complex which disproportionally targets students of color.” DePaul students feel “silenced by the administration,” but they will continue to demand the defunding of CPD.

“For those that think they cannot make a difference or are afraid to speak up, change doesn’t wait for anyone,” Gray said. “Act now, speak up, educate yourself. School assignments or a game can wait when you have the chance to make positive change.”