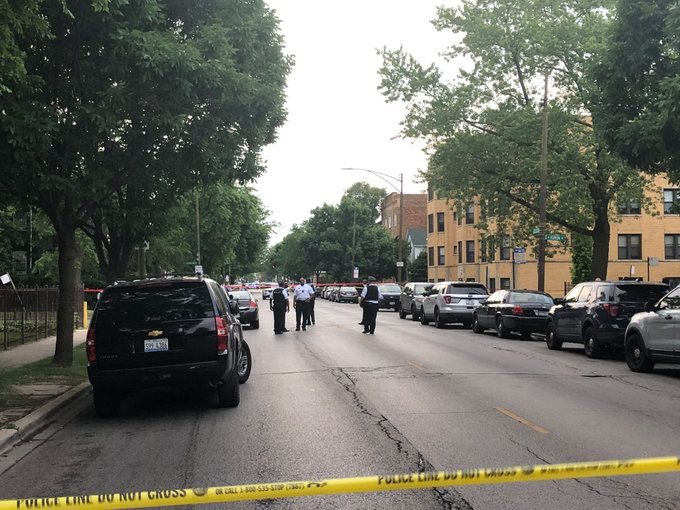 CHICAGO (CBS) — On a violent weekend in Chicago that saw at least nine people killed – including two teenagers and a 3-year-old boy – Chicago Police Supt. David Brown on Sunday demanded that violent offenders be kept in jail longer and that home monitoring be revamped, because “it’s not working.”

“Tears are a natural reaction to these tragic stories of violence. But we need to do more than just cry,” Brown said. “Let’s keep violent offenders in jail longer, and let’s revamp the home monitoring system. It’s not working.”

The boys, ages 16 and 17, were in an alley when a man walked up took out a gun, and shot both of them, police said.

The older boy was identified as Jasean Francis. The younger boy has not been identified.

“These individuals were with their friend. They’d just gone to a mall. They know the neighborhood. They don’t ever go out to the neighborhood because it’s so dangerous,” Deenihan said.

But on that one occasion, the boys asked just that once if they could go down to the store and buy some candy, and when they were almost back at the gateway of their home, a gunman ran up and shot and killed them for no reason, Deenihan said.

Police have identified a suspect in the South Chicago shooting. They say he was wearing a black Puma hooded sweatshirt and ripped faded jeans, and was wearing one shoe on the left foot and a black sock on his injured right foot. Meanwhile, Mekhi James, 3, was shot in the back at 6:30 p.m. in the 600 block of North Central Avenue at Huron Street and later died, police said. The boy’s stepfather was driving south when someone in a blue Honda fired shots at his sport-utility vehicle.

The 27-year-old, who police believed to be the target of the shooting, suffered a graze wound to the abdomen and drove to West Suburban Medical Center in Oak Park. The child, identified as Mekhi James, was shot in the back and later pronounced dead at the same hospital.

Deenihan said police are seeking information in that case from the stepfather.

A matter of blocks away at 8:36 p.m., Amaria Jones was struck by gunfire while inside her house in the 1000 block of North Leclaire Avenue and later died, police said.

Two teenage boys were sitting on a porch when another man saw a red laser light pointed at him and heard multiple gunshots, police said.

The boys, ages 15 and 16 who were outside, and Amaria was inside the home when all were shot, police said.

Amaria was shot in the right side of the neck and was taken to Stroger Hospital of Cook County in critical condition, police said.

“The girl was watching television when shots rang out, striking her in the back,” Supt. Brown said. “She died 30 minutes later.”

Deenihan said there is a gang battle going on in the area, and “You had a coward basically come through the gangway and shoot a bunch of people on the porch.”

Brown said an underlying issue is that violent criminals are free on home monitoring when nobody is monitoring them.

“No one should be able to walk away from killing a 3-year-old and a 13-year-old without consequences,” Brown said. “Let’s keep violent offenders in jail longer.”

He also implored everyone to call 911 if they see a suspicious person, and to visit CPDTip.com with any information.

Five other shootings have also left victims dead in Chicago since Friday evening.

• A 32-year-old man was driving in the 4100 block of West Congress Parkway in West Garfield Park at 10:24 p.m. Sunday, when a black sport-utility vehicle pulled up and someone fired at his car. The driver was taken to Stroger Hospital of Cook County where he was pronounced dead.

• Two men, ages 23 and 24, were in the 1900 block of North Western Avenue on the cusp of Logan Square and Bucktown at 6:58 p.m. Saturday, when a group of other men began yelling gang slogans and asking what gang the two men were with, police said. They got into a fight, and one man in the group yelling the gang slogans took out a gun and shot the two men, police said.

• Police were called at 7:46 p.m. Saturday to the 200 block of North Central Avenue in South Austin, and they found two men, ages 32 and 27, lying on the sidewalk. The older man was shot in the left foot and was taken to West Suburban Medical Center in good condition, while the younger man was shot in the torso and was pronounced dead at the same hospital.

• At 12:04 a.m. Sunday, a group of men got into a quarrel with another group in the 2600 block of West Potomac Avenue in Humboldt Park, police said. One man, 41, was shot multiple times throughout the body and was pronounced dead at the scene.

Another man, 23, was shot in the left knee and hip, and a third, 21, was shot once in each leg. Both were taken to Stroger Hospital of Cook County in good condition. A fourth man, 34, was shot in the legs and arms and was treated and released from Mount Sinai Hospital.