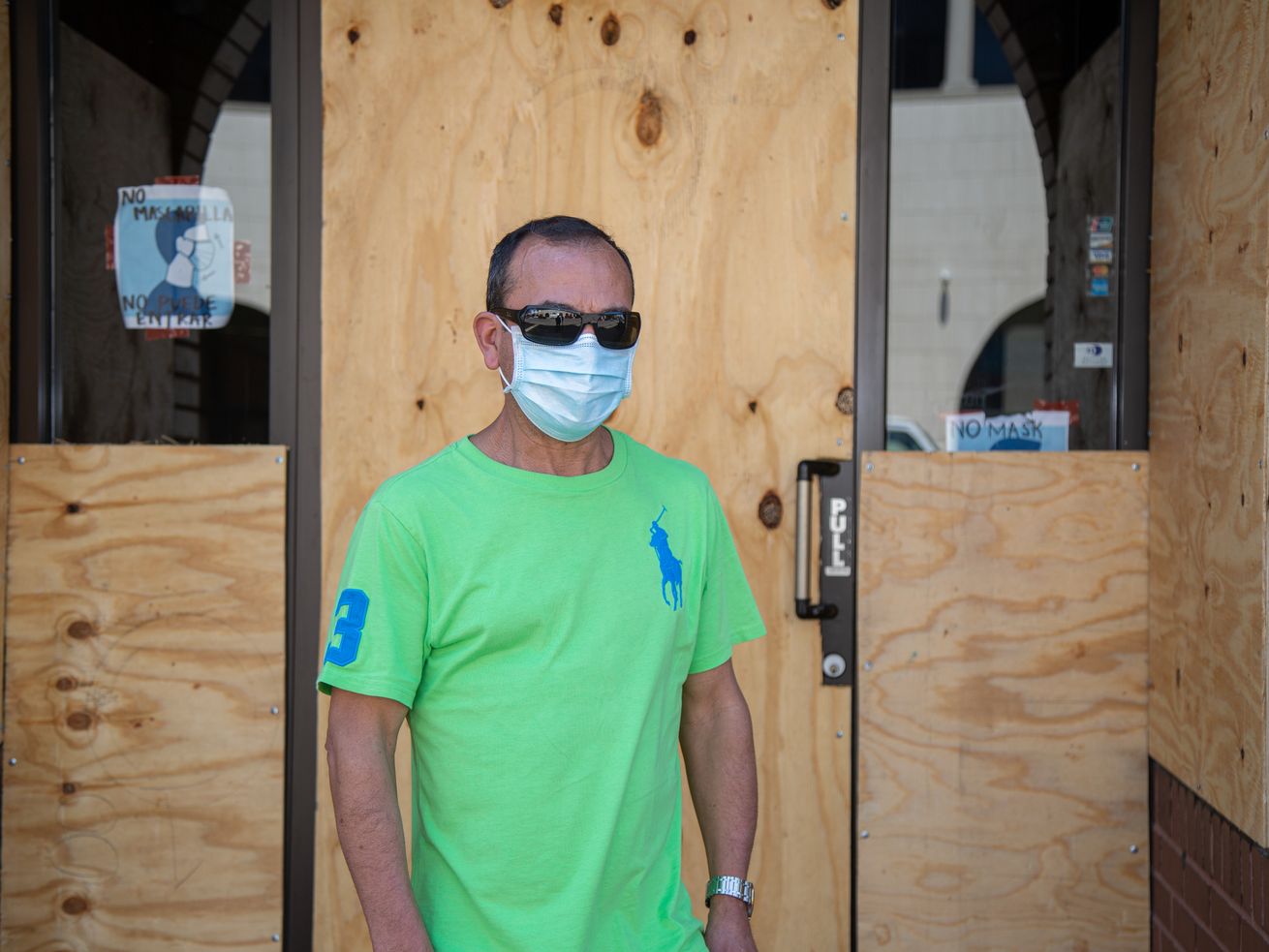 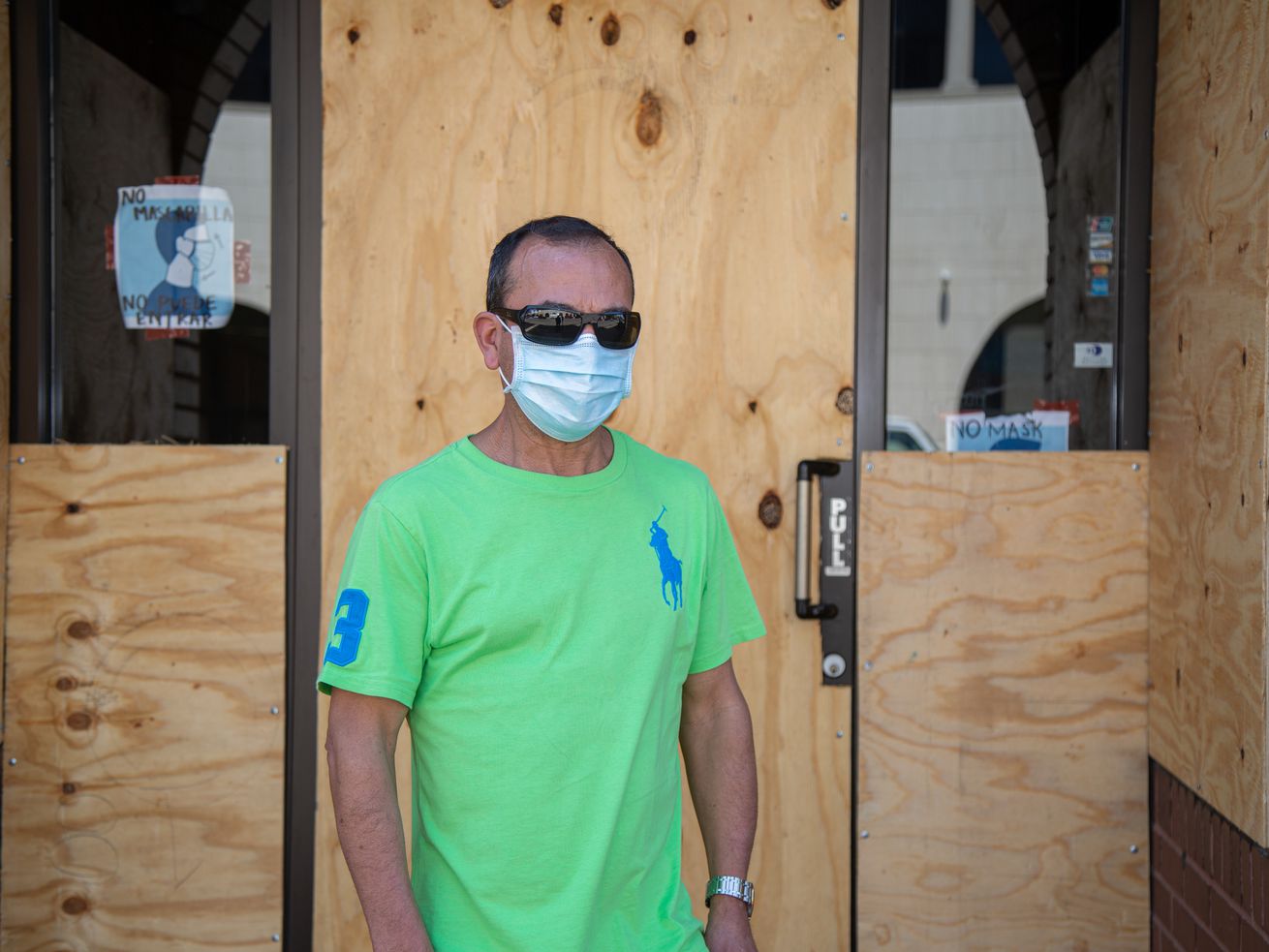 Augustin Torres, owner of El Tecolote Ostioneria & Restaurant, stands outside his restaurant at 3519 W. 26th St. in Little Village, Tuesday June 2, 2020. Augustin feels unsure and unsafe of the increase in violence in the neighborhood after violent clashes have sparked between hispanic gang members and African Americans due to the heightened tensions of protests and looting. | Anthony Vazquez/Sun-Times

“The gangs took matters into their own hands,” Michael A. Moreno Jr., owner of Moreno’s Liquors in Little Village, said Tuesday. “I feel like a lot of people had well intentions at first. Unfortunately, when you start allowing the gangs to start protecting the neighborhood, you are not going to have the outcome that you would like.”

He wasn’t so much concerned about his business, El Tecolote Ostioneria & Restaurant, along 26th Street as much as he worried that things would get out of hand and someone would get hurt. He started to worry more after watching a video on Facebook warning African Americans to stay away from Latino neighborhoods like Little Village.

“We are in the same boat,” Torres said, as he watched men board up his restaurant Tuesday afternoon. “We have to live together.”

As the public was blocked from the Loop after violent looting and protests over the weekend, people have taken to protesting and damaging businesses in the neighborhoods. In pockets of the city like Little Village, residents have decided to take it upon themselves to guard businesses. But some worry the effort has further stoked an already divided city.

In Back of the Yards, Berto Aguayo, the co-founder of Increase the Peace, is just starting to get his voice back. He spent hours Sunday screaming at people who threw objects at African Americans passing through the South Side neighborhood. The organization was among the groups trying to protect small businesses from vandalism.

“We don’t do that,” Aguayo said he’d told people Sunday. “We are here peacefully.”

Aguayo said he knows that some people react emotionally, which could have led to some of the racial anger between Latinos and African Americans on the South Side.He urged leaders from both communities to stop the anti-Black and anti-Latino sentiments that are escalating the unrest, arguing now was the time to work together.

“Once we do that and we are truthful with ourselves, we can transform the narrative that we have right now,” Aguayo said.

Stacey Sutton, an assistant professor of urban planning and policy at the University of Illinois-Chicago, said the conflict lies in the assumption that Black people are the problem.

“They were closing off the Loop and pushing all the protesters West and South,” Sutton said. “Just in saying that it racialized the protesters.”

Michael A. Moreno Jr., owner of Moreno’s Liquors in Little Village, said the racial tension he’s witnessed the past two days is “scary.” He was among those who tried to guard his business, and he tried talk to some gang members who were doing the same thing. But he believes the gang members ended up acting as provokers.

“The gangs took matters into their own hands,” Moreno said inside his liquor store Tuesday. “I feel like a lot of people had well intentions at first. Unfortunately, when you start allowing the gangs to start protecting the neighborhood, you are not going to have the outcome that you would like.”

Ald. Ray Lopez, whose 15th Ward is home to a mix of both Latino and African American residents in communities such as Back of the Yards, said a juvenile gang member shot an African American man near 45th Street and Hermitage Avenue on Tuesday morning after asking the man, “What are you doing in this neighborhood?” The 49-year-old, who was with his daughter and son-in-law, was shot in the wrist and taken to Stroger Hospital. He was in good condition Tuesday.

The Chicago Police Department did not provide details of the shooting, though Lopez said he would reach out to the Cook County state’s attorney’s office “to call for the strongest charges possible, including possible hate crime charges.” The intersection of 45th and Hermitage in Back of the Yards is in the middle of “Halo City,” territory claimed by the Latin Saints gang, according to police sources.

“Gangs thinking they are protecting their communities by intentionally using skin color to harass or, in this case, shoot their fellow neighbor is horrific,” Lopez said in a statement Tuesday. “This mentality to commit hate crimes in the midst of calls for social and racial justice is just sickening.”

Over the weekend, Lopez tweeted that members of the Saints were “engaging and chasing looters in Back of the Yards.”

“What we don’t need is gang members thinking that they are now the police and trying to take matters into their own hands,” Lightfoot said. “We don’t need that. We’re not gonna tolerate that. The police are the public safety force in our city. Not gang members.”

Around lunchtime Tuesday, 26th Street in Little Village was bustling as some businesses started to board up their windows and doors. Street vendors continued selling flowers and fruit as pedestrians passed by wearing masks. But the area started to empty out hours after a report of a nearby shooting.

In Pilsen, many businesses along 18th Street were boarded up, some with “Black Lives Matters” symbols. Others had flyers stating, “Protect Your Neighborhood.”

Roberto Montano, 47, of Pilsen, said he was among more than 100 residents who had volunteered to guard the 18th Street business corridor during the past couple of days. He said the group established checkpoints along with “soft” and “hard” perimeters.

“We just were not feeling that at that particularly moment the resources were there from the city to do what they needed to do,” Montano said. “The way we looked at it was we wanted to be helpful.”

Community organizer Raul Montes Jr. said police were limited and Tuesday called for the National Guard to be deployed to Little Village and Cicero.

But on social media, some questioned if the effort was getting out of hand. Ald. Byron Sigcho-Lopez, whose 25th Ward includes Pilsen, issued a statement saying black and brown communities should stand together during this time.

“We must not let fear take hold and ignite more violence in our own communities,” he wrote.

Elvia Malagón’s reporting on social justice and income inequality is made possible by a grant from the Chicago Community Trust. Sam Charles covers criminal justice for the Sun-Times.