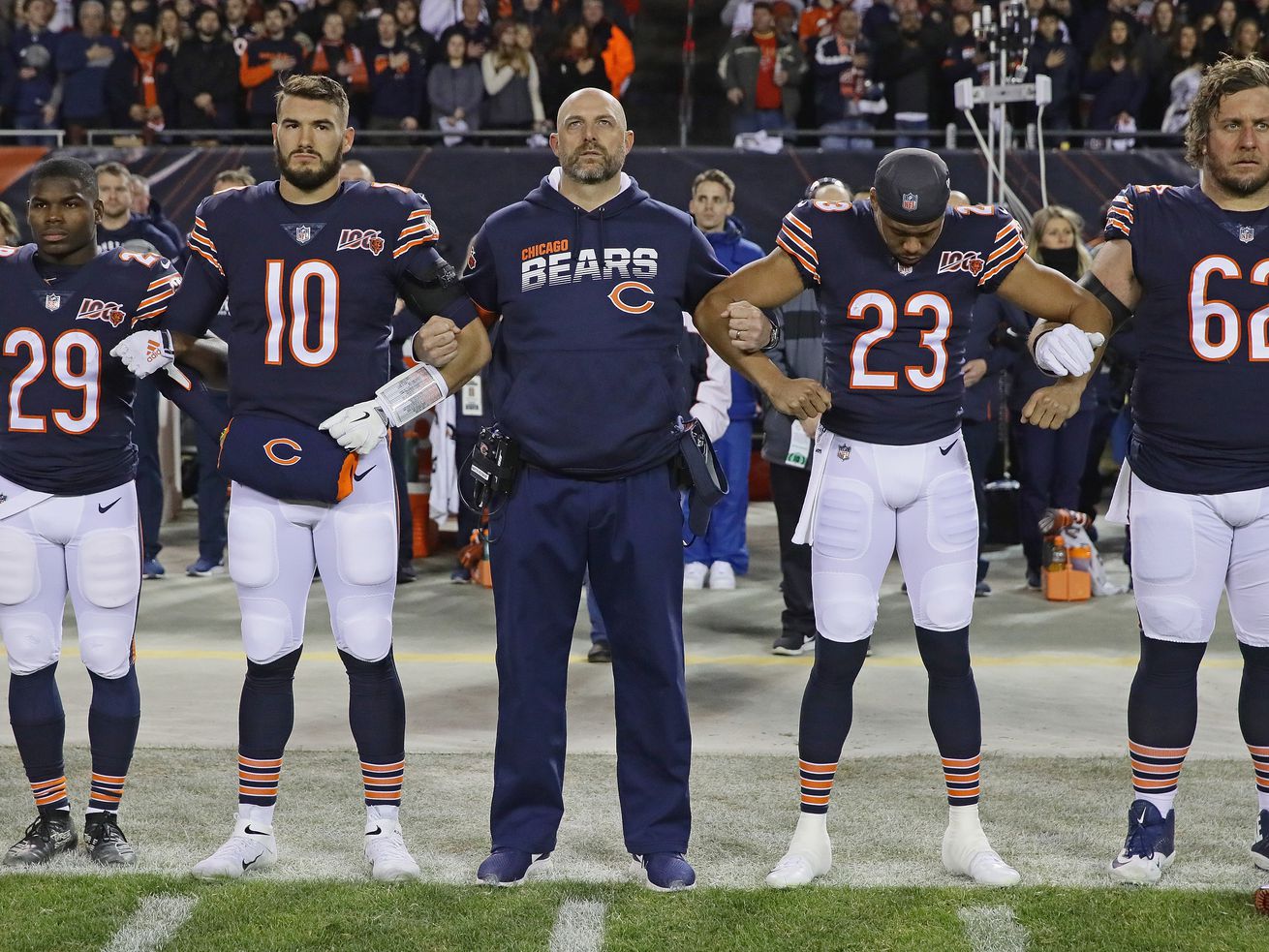 Bears coach Matt Nagy (standing with Tarik Cohen, Mitch Trubisky, Kyle Fuller and Ted Larsen during the national anthem prior to the game against the Chiefs last season), was adamant that he addressed the civil rights issue facing the country. “Football is extremely secondary,” he said. “We have to get life right, and that was No. 1 for all of us.” | AP

In the wake of the civil unrest that has engulfed the nation, Matt Nagy convened his team on Zoom for a heart-to-heart exchange that had a tremendous impact. “It changed my perspective on life,” Akiem Hicks said.

Akiem Hicks was dubious when Bears coach Matt Nagy called a Zoom meeting for the entire team to address the turbulent civil unrest that has torn the nation apart in the wake of African-American George Floyd’s death at the hands of a white Minneapolis police officer.

More than dubious, actually. The Pro Bowl defensive end — a leading voice on and off the field and a member of the team’s social justice committee — thought it would be a sham.

“I wasn’t too excited to get on that call,” Hicks said. “I didn’t think anything was going to come from it. I didn’t know why we were having this moment where we were singing Kumbaya and trying to get over what’s really happening in the world.

“I felt like it might be a control situation where they want to control the narrative and point us in a direction so when we talk to [the media] there’s only going to be a certain message that you guys hear.”

But when it was over — after more than 40 of the 139 players, coaches and team personnel on the video conference spoke in the two-hour meeting, many of them passionately in a real-talk, from-the-heart, come-together meeting that included tales of woe some would not normally share in the context of a football team — Hicks was glad to admit he was very wrong. The meeting was nothing like he thought it would be.

“It was the complete opposite,” Hicks said. “I watched young black men, young white men, older coaches from all over the United States — and watching everybody rebuild themselves in a way that isn’t common in sport or masculinity in general, and express their real feelings.

“Everybody … shared from the heart and shared their real experiences. There was some hurtful stuff in there. There was some stuff where people were changed and altered for life. I won’t speak [in details] because that’s their story. But I will say this: As a team, there was a level of healing in that call, a level of just coming together. It was a positive call and I think it will change the lives of some of the young men on the team and it changed mine. It changed my perspective on life.”

There’s no telling what the fallout from this unsettling episode will be if the dust ever settles. But with a locker room of motivated, competitive athletes of different races, from different parts of the country, molded by varying degrees of disparate upbringings, Nagy’s job probably didn’t get any easier over the last 10 days.

Everybody talks about building a culture, but it’s a particular passion for the Bears under general manager Ryan Pace and Nagy. In two seasons as the Bears’ head coach, Nagy has had one very good season and one disappointing season. We don’t know if he can coach. But we do know he has a knack for managing people — a forte that figures to come in handy in a critical season. Already, it has.

After talking with some players, Nagy decided to spend Monday’s two-hour allotment of meeting time on healing. “To listen and to let our players know how much I and we support them. And then let them feel our love,” he said. “That starts by listening. We did that.”

Even the ever-confident Nagy was unsure how it would go — if it would seem too forced and unnatural. But the emotion of the moment brought a team together like never before. “There was a lot of anger … fear … disgust … sadness,” Nagy said. “There was compassion, hurt and even at times … surprise.”

“We were all very emotionally drained, in a good way,” Nagy said. “It was probably the most powerful two-hour meeting that I have ever been in and will ever be in. ”

And Nagy felt that emotional as well.

“I’m just proud of our family,” he said. “I’m proud of our players, our coaches. There was a protectiveness to the meeting. There was a vulnerability to people’s stories. I know the word powerful has been used a lot, but to me it was raw. I feel like y’all should know that because this was way bigger than football. I know I and many others were completely exhausted, but you felt love and you felt togetherness. And that’s how this thing starts. It was the start of a long, long journey and we’re excited to do it together.”

The following day, Nagy cancelled all team activities to observe “Blackout Tuesday” and then resumed football preparation on Wednesday, “which did feel good,” he said. The Bears and Nagy still have a lot of work ahead on the football field and a lot to prove. But in the midst of a crisis that is much bigger than football, Matt Nagy moved the Bears one small step in the right direction.