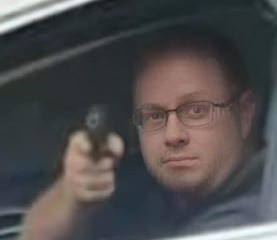 BOLINGBROOK, Ill. (CBS) — Police in Bolingbrook have issued a warrant for a man they said was seen pointing a gun at a driver in a suspected road rage incident earlier this week.

An arrest warrant on aggravated assault charges was issued for Joseph P. Colonero, 33, of Aurora. Investigators have been in contact with his attorney, but he was not in custody Thursday afternoon, police said.

Around 11:20 a.m. Tuesday, a woman reported that she was headed east on Boughton Road at Brighton Lane in Bolingbrook, when came across two vehicles – a black pickup truck and a white Lincoln MKZ – whose drivers appeared to be in a road rage incident.

The woman inadvertently ended up between the two vehicles in her own car, police said.

The man in the MKZ slammed on the brakes – causing the woman to make an evasive maneuver, police said.

As the woman passed the MKZ, the man driving it pointed a handgun at her, police said. Video was posted to social media, and the police released a still image. A man is seen pointing a gun at a driver in Bolingbrook during a suspected road rage incident on Tuesday, June 9, 2020. (Credit: Bolingbrook Police)