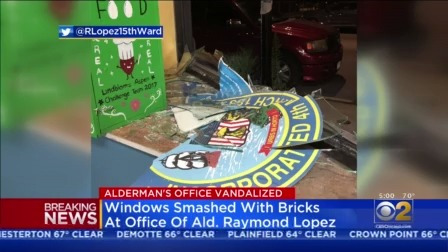 Police said two people were seen throwing bricks through the front windows and door of the alderman’s office just before midnight.

Lopez tweeted photos of the damage, while calling out Mayor Lori Lightfoot for refusing to address what he calls “terror attacks on our communities.” Lopez said he believes gang members are targeting him.

When you Mayor, refuse to call out the terror attacks on our communities, especially on their electeds, criminals only feel more emboldened to continue their reign. Glass can be replaced, peace of mind and security cannot. Your silence is destroying this city! pic.twitter.com/n0lBBgnb9o

The alderman said he’s been targeted before.

“Following the assault on my home about two weeks ago, I’m sure this is connected,” Lopez said. “The descriptions match the people and I have no doubt that this is a continuation of gangs still trying to send a message to intimidate me.”

About two weeks ago, bricks were thrown through the windows at his home in Brighton Park and the garage next door was set on fire.

After a brazen front-door assault, this vandal attempted three more times to break the windows in front of my house. pic.twitter.com/u5npa99KRN

Monday morning, Lightfoot said, “any attack on any elected official simply can’t be tolerated in our city.”

The mayor said after Lopez’s home was vandalized, her administration made sure the local CPD district commander and other top brass contacted the alderman to make sure his security needs were addressed. She said CPD would renew those conversations in light of the vandalism at Lopez’s ward office.

“We’ll make sure that they’ve got the resources they need to be secure. We’re not going to tolerate anyone attacking elected officials, and engaging in criminal conduct against them, period,” Lightfoot said.

No arrests have been made as of Monday morning.

Lightfoot and Lopez, one of her harshest critics, have been at odds since she took office last year. Their most recent public clash came after Lightfoot accused an unnamed alderman of breaking the law by recording a private conference call between herself and the City Council, and leaking a foul-mouthed exchange to the media. Though she didn’t name Lopez, it was clear the 15th Ward alderman was the person she was referring to.

During a conference call with all 50 aldermen on May 31 to discuss the city’s response to the looting, Lopez accused the mayor of being unprepared when looting spread from downtown to the neighborhoods that weekend.

Lightfoot did not answer Lopez’s questions in the call, prompting an angry exchange.

“It’s not something you ignore. This is a question that I have,” Lopez said.

That’s when the call turned profane.

The profane argument was first reported by the Chicago Sun-Times, and WTTW later obtained a recording of the call. A source later provided CBS 2 with a snippet of the call, including the foul-mouthed back-and-forth between Lopez and Lightfoot.

When the mayor was asked if she regretted her use of profanity in the call days later, she did not directly answer the question, but said that the conversation was meant to be private, and said she and the aldermen need to be able to have candid conversations.

“There were a lot of incredible emotions that were shared in that call by fellow aldermen, now all of whom don’t feel secure or safe coming together with their colleagues, because of one individual who decided to illegally tape a conversation that was intended to be a private conversation among all of us,” she said.

Lightfoot did not directly accuse Lopez of leaking the recordings, but clearly suggested he was behind it.

“One of the aldermen, and I think we know who it is, illegally taped and then shared only that portion of the conversation that served his purposes,” she said.  “Shame on him. Shame on him. That’s what I say.”

Lopez denied recording and leaking the call, and accused the mayor of hypocrisy for saying it was illegal, claiming her staff has recorded every Zoom meeting with aldermen during the pandemic. He also claimed the calls the mayor has been holding with all 50 aldermen during the pandemic are a violation of the Open Meetings Act, and accused her of trying to distract from the substance of the call.

“The Zoom meetings invite 51 elected officials and nearly a dozen staff, yet Lightfoot’s anger is once again directed solely at me because I refuse to accept her failures. Furthermore, I do not believe her anger and outrage over these leaks has nothing to do with my colleagues. It has to do with her inability to spin the narrative in a way that benefits her,” Lopez wrote in an email to CBS 2. “The curtain has been pulled back, revealing the truth behind the chaos.”

The mayor’s office denied the private conference calls with aldermen were a violation of the Open Meetings Act.