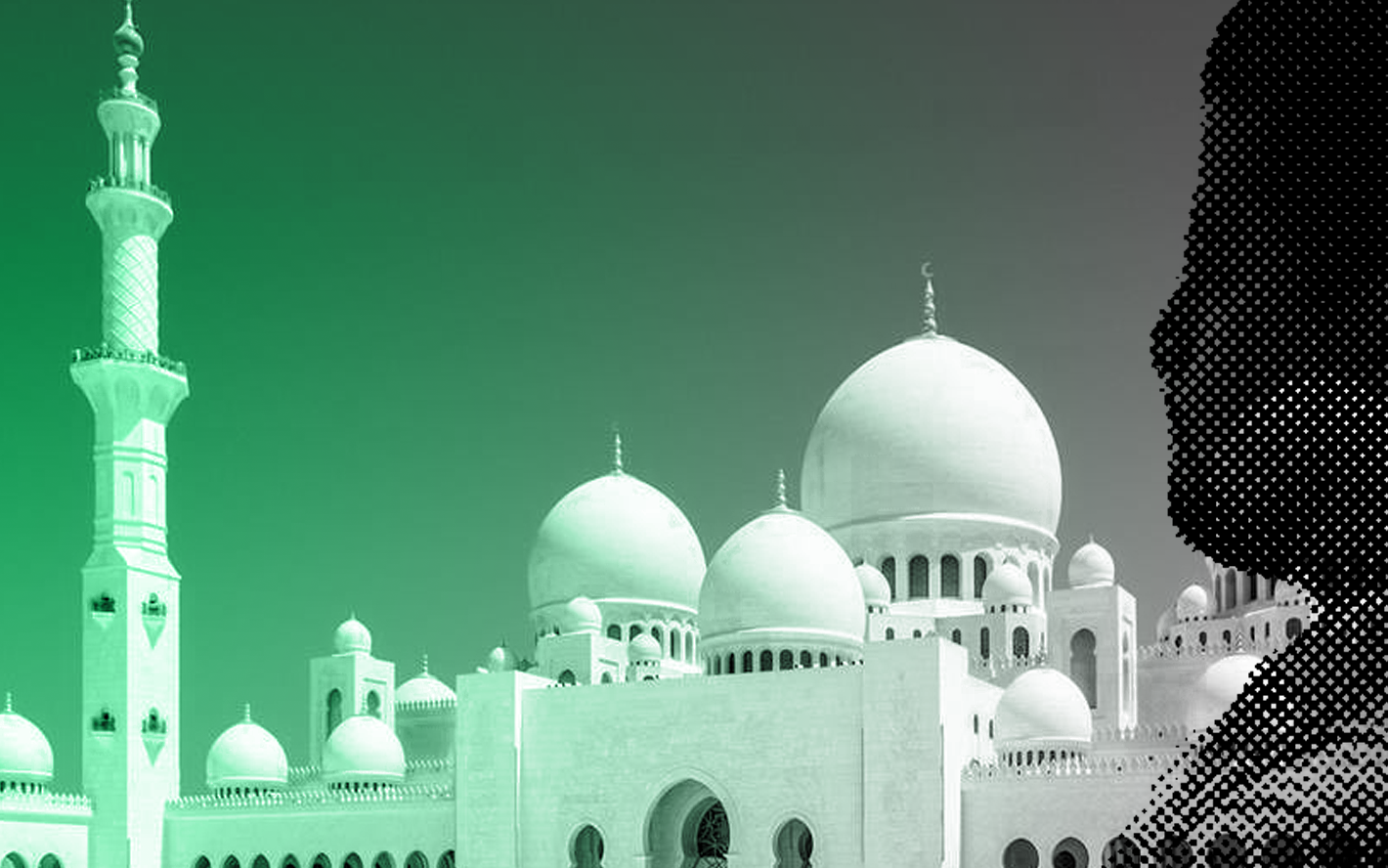 “We have a huge Latino Muslim Community in the Chicagoland. It’s like, we’re always meeting someone new. It’s multiplied so much, especially with millennials coming into Islam. It’s really beautiful to see,” Chicago native Diana Cruz beams, her excitement palpable through the window of our Zoom rendezvous.

Cruz is Mexican-Puerto Rican who converted to Islam 20 years ago. She volunteers for the Islam in Spanish chapter in Chicago, an organization that provides Spanish language programming and Islamic education to Latino Muslims. Cruz joined the organization—which celebrates the diversity and richness of the Latino diaspora—out of frustration at fellow converts who appeared to leave their ethnic identities behind. “I’m Muslim but I like my arroz con grandules con chiles rellenos. There’s nothing wrong with both being Muslim and embracing our Latino culture,” she said.

Between the Muslim Ban, the deportation crisis at the Mexican border, and the xenophobic rhetoric spewed daily from the White House, the time has come to start acknowledging that Latinos are one of the fastest growing populations in America’s Islamic community. UIC graduate Christopher Nevarez reflected that the Trump Era has only made him more vocal and willing to defend both aspects of his identity. As a Mexican-American DACA recipient who converted to Islam during the Trump presidency, Nevarez never felt compelled to hide who he was. “Instead of taking Trump’s rhetoric like, I’m under attack, I’m taking it like, I have all these opportunities to respond,” he explained. For example, Nevarez became a fellow for the Illinois Muslim Civil Coalition, where he educates communities on the census and voter engagement.

According to Diana Cruz, xenophobia and its impact on her life is nothing new. In the wake of 9/11, she was fired from her job for being Muslim and struggled to find employment thereafter. Trump’s presidency has only amplified the voices that had already stigmatized her. During Trump’s election, Cruz was in her company’s office. “When Trump won, [the former company’s VP] just goes, ‘Yes! It’s our turn,’” she recounted. “And I look at him, being the only other minority, like, ‘what is going on?’”

Moreover, the polarizing political climate has worked to exacerbate racial and xenophobic tensions from within Latino and Muslim communities, putting Latino Muslims like Nevarrez in a difficult position. “Some in the Muslim community take this anti-Latino, anti-immigrant rhetoric, internalize it, and spit it out, or at least believe it. Some Latinos do the same… it’s a war within all these groups that are being marginalized,” he explained.

Nevarez responds to being attacked from all sides by being the best version of both his identities. “When I’m surrounded by Latinos, I’m kind of representing Islam and ‘being Muslim’ to them,” he said. “[I’m] really making sure that I’m conscious of what I’m representing and open to answering questions and responding to any misconceptions that they might have.”

Similarly, Cruz experienced discrimination within her Latino community while she was at work. “I once overheard a [Latino] coworker call me a dog in Spanish. That hurts a lot, because you’re my people.” The coworker hadn’t recognized that Cruz was Latina because of her hijab, she explained. “So, I turn around and I’m like ‘I am more Mexican than you. And it’s sad that you’re treating me like this when I’m fighting for your rights.’”

Resident scholar of the Islamic Learning Foundation, Imam Yusuf Rios was studying to become a priest and volunteering with a Mexican immigrant community when he observed discrimination in the Catholic church. “They were treated extremely badly… You know how Mexicans are very expressive with their religious commitment, they have the Guadalupe, but they weren’t allowed to put that in public. They couldn’t celebrate Mass with the general community.”

Rios also struggled to reconcile the historical realities of Catholicism as a colonial imposition. “I had issues with that that I never really resolved. For me, there was a desire to pursue some sort of justice struggle,” he said. That justice struggle was sought through the founding of the Three Puerto Rican Imams project, the first Muslim relief organization run by Latinos to provide emergency relief in the wake of Hurricane Maria. “That was basically my coming into Islam. It was working out my own struggle of survival, and what that means in the context of religiosity.”

Though raised Roman Catholic all his life, Nevarez decided to take college as an opportunity to explore his faith away from home and free of judgement. He took classes on Islam and engaged in thought-provoking discussions on the Koran with his new friends and his university’s Chaplain. “Everything that I heard [about Islam] clicked and it made sense. I already had the faith aspect having been raised Catholic, but there was more logic to Islam,” he said.

ACLU Civil Rights attorney Aaron Siebert-Llera was raised between his Jewish-American father and Mexican-American Catholic mother, yet settled with Islam. He was drawn to the lack of religious hierarchy, observing that there weren’t “as many layers that existed between [himself] and God,” Siebert-Llera said, “I still had a way to get to God without having to seek forgiveness from a priest, without going to confession, without having to see what the Vatican has to say about X, Y, Z.”

Cruz herself went through the similar process of questioning her religious beliefs. She had been undergoing a divorce when she received the news that her mother had breast cancer: “I think I ended up getting upset and mad at God. I started questioning it. Like, why my mother?” In college, she searched for answers, until finally asking the question: What does Islam have to say about death and illness? She learned that “a disease is a way of purifying your soul, because we don’t want to go to paradise with sin. I understood now that this was a mercy that God has given my mother.”

Though he experienced a harmonious transition into the Muslim community, Nevarez still recognizes that in some matters he is seen as an outsider. “A lot of times Muslims are very open and welcoming to converts, but would not, for example, let their daughter marry me,” he said. He also has to navigate stigmas from outside of his community. “People have the misconception that… because we’re Mexican, we party. So for them it’s like, how are you still a good Muslim if your family is like drinking and partying every weekend?” Still, navigating stereotypes about his Mexican identity has never caused Nevarez to waiver from his faith: “For me, it’s not an internal conflict—because I’m comfortable with both and I accept both identities— but this external conflict, where others think that I can’t be both, or only accept one side of me.”

According to Cruz, gender also plays a role in complicating her relationship between her Muslim and Latino identities. She found that while her Latino background raised her to be outspoken and passionate about her beliefs, in her Muslim community, she’s encountered tensions that she believes are cultural. “I’m a woman, I’m divorced, and I have no male representation, so I have to advocate for myself,” she said. “I’ve been in situations where I’ve been asked, ‘do you have a husband?’ And I’m like, ‘do I need a husband to speak?’”

Despite all the challenges of navigating political debates and stigmas, Nevarez found immediate acceptance of his commitment to Islam within his family. Looking back on his journey, Nevarro serenely reflected “My friends just seemed to be happy, seemed to be more energetic than I was… And I had this good type of jealousy, like what do you have that I don’t have? And later I found out that it was Islam.” In the face of Trump’s xenophobic and racist tirade, Latinos like Nevarez continue to openly embrace Islam as a source of community and a pathway to activism.

All translations by the author