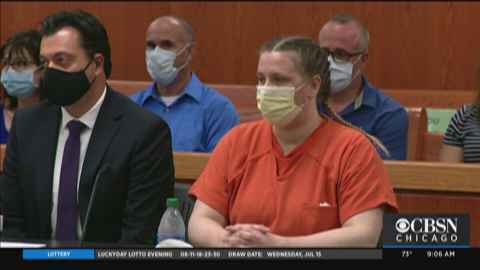 Another Crystal Lake officer takes the stand. He said he was there to assist in the search for AJ on April 18. At least 20 people showed up to help in the search, several were from different law enforcement officers from neighboring municipalities. Three drones were used in the search. He said the FBI was called in to search, at least 20 FBI officers assigned for six days. The FBI assisted with organizing incoming information, leads, etc.

The search was still taking place on April 22. About 30 people from the McHenry County EMA arrived to assist in the search. Illinois State Police had a plane up to help in the search. The officer said during the first six days people were working 24 hours a day in the search.

Another Crystal Lake detective takes the stand. He said he arrived at 6:30 on April 20. A small vigil was taking place.  Freund arrived alone. Cunningham arrive around 6:45. They shared a quick hug and separated. The detective said police followed Freund to keep an eye on the families.

Video is shown of Cunningham being questioned in a small room with police about last seeing AJ. Cunningham said she couldn’t remember what sneakers he was wearing or whether a hoodie. She starts to cry saying “he’s got to be so scared and he thinks he’s going to get in trouble.” The officer said you had absolutely nothing to do with this. Cunningham said “absolutely not.”

Text messages were released between Cunningham and Nowicki while he was incarcerated. The message read “AJ is playing hide and seek with me, we can’t find him. But I will be there. But if I don’t find them in the next few minutes I’m calling the police.” AJ was already dead at this point.

A Crystal Lake detective takes the stand confirming text messages between Cunningham and Freund sent between April 16 and April 18, 2019. Cunningham messages to him about getting AJ help and “God is good.” AJ had already been dead at this point. The texts on April 16 have Cunningham describing the kids painting Easter eggs. She said AJ was sent to his room because he lied about breaking a cup.

On April 17, Freund sent a text message that read “have a great and blessed day give the boys a hug and kiss for me.” Cunningham asked Freund to get a couple of TVs so she and the boys could watch movies in her room together.

On April 18, Cunningham sent a text message to Freund saying “please also check the gas station. That’s the only other place I can think of that you would know. Please please ask them. I looked everywhere in the house” and to tell him to come out and that he’s not going to get in trouble.

The court plays a phone call between Cunningham and her boyfriend Daniel Nowicki on April 16. He was incarcerated at the time and AJ was already deceased. She said she had been looking into child psychologists for AJ. Because Cunningham said that at times he acts out.

After the officer searched the house, the officer said he saw Cunningham outside and saw her laughing with a friend but didn’t know what they were talking about.

Identifying pictures of AJ’s room, there was a hole in the roof. There is a padlock on the outside of AJ’s closet. The window in the child’s room appeared to be broken. There was a hook on the window that prevented it from being open.

The officer is asked to identify photos taken at the home. Piles of garbage are seen next to a backyard fence. A bag of syringes is also seen. There are photographs of the inside of the home showing clutter; clothes, shoes and garbage throughout the house. The officer said he was overwhelmed with how it smelled and the condition of the house. The officer added that he tried to get into lower level cupboard, to see if the child was hiding. He said it was difficult to get through because of the clutter in the area.

Asked to describe what he saw, the officer said “in one word filth.” The officer said he saw tons of mice droppings. There was garbage and debris throughout the house. In the room of AJ’s father’s room, Andrew Freund, there was a milk jug with a funnel with a yellow fluid. The officer couldn’t confirm if it was in fact urine.

Taking the stand, a Crystal Lake officer who was dispatched to AJ’s home after a call for a missing child. The parents said they saw the child in bed at 9:30. The officer said Cunningham became aware of AJ’s disappearance after she woke up after 7:00 a.m. Police asked to search the home to make sure the child wasn’t hiding.

The officer entered the side door and had “sensory overload.” Said he saw filth, stale food left out and there was a faint smell of urine. He said he wasn’t expecting what he saw.

Court is back in session. Taking the stand is a neonatologist present at AJ’s birth in 2013. The doctor said the baby tested positive for opiates, specifically heroin. He said the baby was treated with morphine to “calm” the baby as it goes through withdrawal symptoms.  He was given morphine for more than a month after birth.

As the video plays, Cunningham wipes her nose several times, balling up tissues at her table as she fidgets with the tissues. Cunningham accuses AJ of trying to manipulate his father against her. Asking him if AJ thinks his dad is a pushover. AJ says in a quivering voice no. She yells back “nothing is going happen. Ever!”

In another video, Cunningham is heard questioning AJ, beratting him asking him to answer her questions. At one point she asks about his “fake ass bull****.”  When she yells at him to answer a question about other people being around he said “so I don’t ever have to see you again.” AJ added that he wants to be alone.

The court is playing video found on Cunningham’s computer. The video is not being shown, but the audio is played. She accuses him of wetting his pants. “That’s f****** piss,” said Cunningham. As the video is played, Cunningham looks down and fidgets with her hands.

Cunningham, in an orange jumpsuit and light yellow face mask is staring straight ahead with her hands clasped in front of her.

An emergency room physician takes the stand. In December 2018 AJ went to the emergency room at Northwestern Memorial in McHenry County. According to the doctor, Cunningham wanted to make sure AJ would be able to go home with her. The doctor saw that AJ had several bruises on his body. There were three injuries to AJ, including a large bruise on the boy’s right hip. According to the doctor, Cunningham wasn’t sure how the bruises got on AJ. That he was possibly “rough housing” with his brother or that the dog may have been involved.

When the doctor asked AJ how he got hurt, he said it wasn’t someone in his family and that it wasn’t his mother.

When the officer said she asked Cunningham about a large purple-colored bruise on AJ’s body, she motioned to AJ that the dog Lucy had done it and AJ agreed.

First person to take the stand is a Crystal Lake police officer who saw Cunningham in 2018 in a fast food parking lot and she said someone had broken into her home. The officer then followed Cunningham to her home. The officer said it looked like they lived in squalor. She saw AJ had bruises on him and took pictures of the child. “It was not good,” said the officer, noting that she saw a hole in the ceiling and that the linoleum floor had been torn up. It smelled horrific.”

Court is now in session. Judge Wilbrandt is laying out rules for social distancing in the courtroom. Everyone is wearing masks.

AJ’s disappearance gripped the nation when he was reported missing by his father on April 18, 2019. The senior Freund led investigators to AJ’s body a week later. Buried in a shallow grave in a field in Woodstock, AJ was found to have died from blows to the head.

Cunningham pleaded guilty last December to first-degree murder in AJ’s death. As part of a plea deal, prosecutors dropped all other charges against her, including language that called the crime “brutal and heinous.” Prosecutors said she will not be eligible for parole, and must serve her entire sentence. The plea also allows her to avoid a life sentence.

Cunningham: “No, we were a good, loving family.”

Edwards: “JoAnn, a lot of people are just going to have a hard time believing that.”

Cunningham: “I’m sure they do, but I don’t care what they think.”

In the interview, Cunningham denied that she killed AJ, though she later pleaded guilty.

Cunningham and A.J.’s father, Andrew Freund, were indicted on a combined 61 counts last May, including murder, aggravated battery, and concealing a homicide.

Their son was found beaten to death and buried in a shallow grave in a field in Woodstock in April, about a week after they had reported him missing. An autopsy determined A.J. died of multiple blunt force injuries to his head.

Police and prosecutors say A.J.’s parents forced him into a cold shower as punishment for soiling his clothes and severely beat him on April 15. His father later found him dead in his bed at their home in Crystal Lake and buried him in a shallow grave. A.J.’s parents falsely reported him missing three days later.

For days, the community prayed A.J. was alive. But police found A.J.’s body wrapped in plastic in a shallow grave in Woodstock on April 24 and charged both of his parents with his death.

Back in March, wrecking crews destroyed a home which was the scene of a horrible crime in Crystal Lake. It was the home where AJ suffered intense abuse, which eventually left him dead.

In 2019, CBS 2 received more than three dozen images taken during police visits to the Crystal Lake home of Andrew Freund and JoAnn Cunningham. The photos show a house in total disarray.