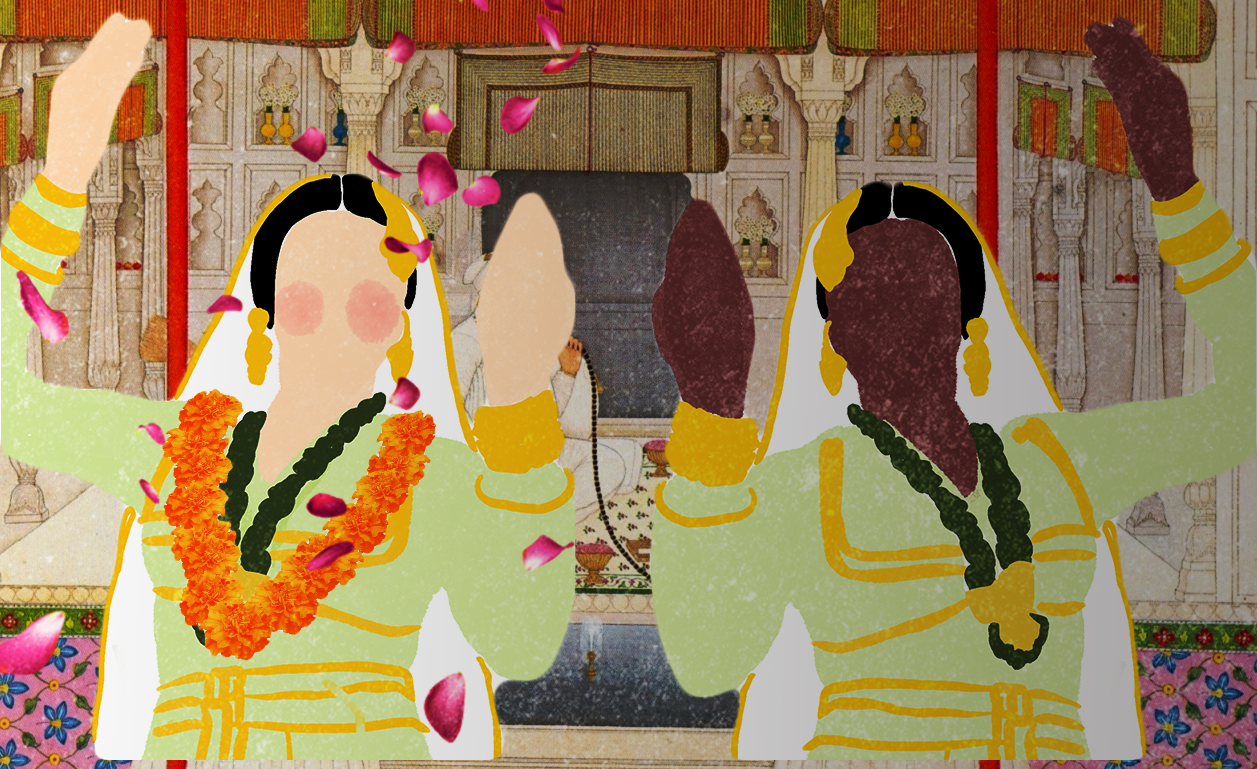 Members of Desi communities have all experienced colorism by observing it or being subjected to it. With the colorism comes racism, notably, anti-Blackness. Fairness is lauded by our peers and family, while dark skin is deemed unattractive. South Asians stray from the sun, see brides caked with light foundation, and are acutely aware of the lightening creams circulated in beauty salons and grocery store shelves. Those very creams recently saw a subtle brand change in wake of the recent Black Lives Matter wave. Unilever announced that they’re rebranding their Fair & Lovely cosmetics, with the intent of dropping the “fair” from the name. They aren’t, however, discontinuing the products, and they’ll still be used for their skin-bleaching purposes. Thus, the reverence of “gori,” or the fair-skinned maiden continues.

Colorism and racism have a deep, intertwined history in South Asia, with roots in casteism, Victorian racial theory, and the Indian Ocean Slave Trade. The idolization of fairness is further underlined in the media South Asians consume; specifically when listening to Urdu and Hindi popular music. A frequent subject in love songs, the coveted “gori/gora” (the fair-skinned heroine/hero), takes a form shaped by colorism itself, perpetuating it further.

Those reinforced notions become embedded in the collective conscious of South Asian communities, leading to further demand of skin-lightening creams like the soon-to-be-formerly-known Fair & Lovely, commands to stay out of the sun, and the overnight change in a bride’s complexion. Eventually, it manifests as anti-Blackness.

To understand how ubiquitous celebrated-whiteness is throughout Hindi and Urdu lyrics, we need to dismantle and analyze what the songs are actually saying. Below are some Bollywood songs from the last 20 years addressing whiteness in the form of the heterosexual female.

The first song is “Gori Gori” from the Bollywood film Main Hoon Na, released in 2004.

(O Fair-skinned lady,
sometime, somewhere, discreetly,
quietly meet me,
whisper to me sweetly,
but don’t do it with anyone but me).”

The lyrics immediately label the fair-skinned heroine as desirable, so much so that the hero entices her to meet him secretly to exchange sweet nothings.

(Since you came, dreams burst open.
Your kindness made the season spring with youth).”

The hero lauds the “gori,” or fair-skinned heroine, exclaiming she inspired his dreams and makes those around her verdant with youth. Notably, the heroine is firstly and repeatedly referenced to as “gori,” or white. It’s her name in the song, the source of her beauty, and it’s what makes her desirable to the heterosexual male gaze.

This sentiment is expressed even more explicitly in the song “Rock n Roll Soniye,” from Kabhi Alvida Naa Kehna from 2006.

(Hey, white faces,
Glowing like the moon,
With black hair,
Blue eyes.
They show me my dreams,
Make me forget my path,
And make everyone crazy).”

From this excerpt of “Rock n Roll Soniye,” the hero directly lists the physical characteristics that make the woman desirable: her white skin, underlined by the fact that it shines like the moon, her black hair, and her blue eyes. They’re the source of his listlessness cause a desirous frenzy. Later in the song, the heroes underline their yearning:

(Oh on your white, white cheeks,
And your curly, wild hair,
What can I say)?”

To the hero, the fairness of her skin, mixed with the contrast of her dark hair, drives him speechless. This kind of frenzy tows the line of hyperbole–is he really driven into a lustful fit when he sees such a beautiful, white, woman? It’s understood that is hyperbole, given the setting of the song to be in a ballroom of celebration. But, the lyrics communicate to the audience that a frenzied entitlement is the appropriate response upon viewing a white-skinned, fair beauty.

The development of a feverish delirium caused solely by the features of a beautiful, fair-skinned woman not only emphasize beauty standards, but also punctuate entitlement do it. This plays into another problematic trope in South Asian popular culture: the harassment of the female–based solely on her appearance–in a heterosexual romance. For example, take a look at “Chane Ke Khet Mein” from 1994’s Anjaam:

First the rascal grabbed her wrist,
Then he quietly pressed her finger.
She was forced, in the chickpea field.

All around me there were hunters,
Sitting there, they all stole my youth).”

In this song, from the perspective of the “gori,” the singer jovially sings from the perspective of a young girl telling the audience she was violently assaulted in a chickpea field. Again, throughout the song, the victim is consistently referred to in desirable characteristics: modest, young, and white, with “gori” used as the identifier repeatedly.

Glaringly, the song underlines victim blaming in rape culture and women–she was beautiful and fair, and the men, despite the victim’s modesty, couldn’t contain themselves when seeing her. There are many pieces to unpack in this particular song, including the assault presented in a happy melody and the fact that in the film, the character singing dies at the hands of her stalker. But, strongly implied through the repetition of “gori,” is that the victim’s whiteness, and thus her desirability and beauty, led to her “loss of youth.”

When such songs are played at weddings and other parties, they become associated with celebration, highly-consumed and reinforcing the release of songs with similar lyrics. There are hundreds of more songs, from folk to more Bollywood, repeating the preference of fairness over darkness in skin. As such, it manifests as colorism and racism women face in their private and public lives. This is the case in an NPR podcast where a darker-skinned Indian woman started using fairness cream after hearing songs marking whiteness as beauty.

Even further, in Desi communities, it reifies anti-Blackness against Black folks. With whiteness consumed and emphasized in a medium as fluid as a song lyric, it’s no surprise why anti-Black racism is so prevalent in South Asians and the Desi diaspora. In order to fully dismantle racism in Desi communities, which many activists have recently charged themselves with doing, we need to take the media we create and consume into account. Catchy, filmy songs included.