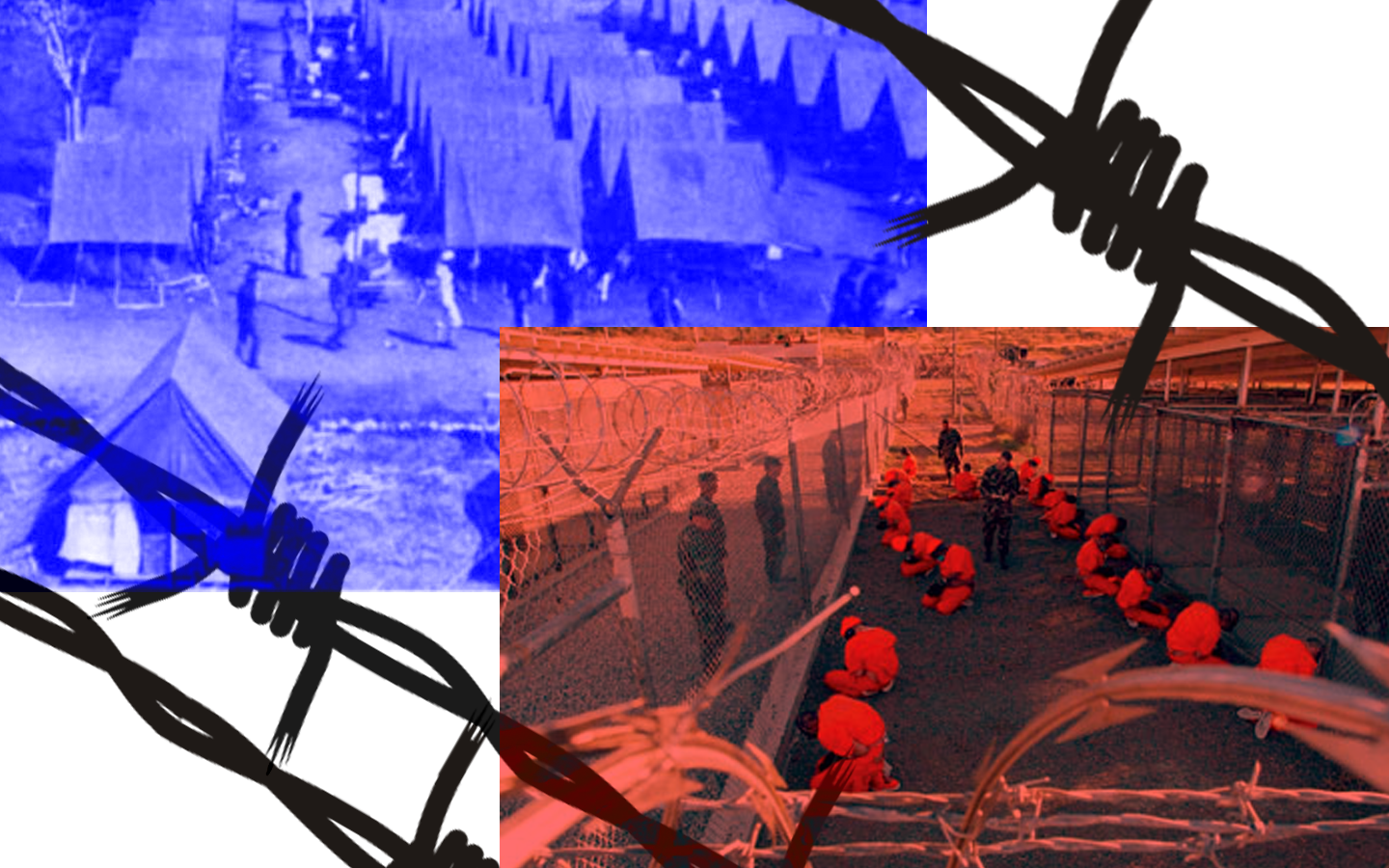 Shortly after the arrival of men to Gitmo, President Bush delivered the 2002 State of the Union Address. Guantanamo was mentioned only once, stating, “terrorists who once occupied Afghanistan now occupy cells of Guantanamo Bay.” After Secretary of Defense Rumsfeld announced the men held at Guantanamo were unlawful combatants as opposed to prisoners of war, human rights organizations responded, stating as determined by the Geneva Convention that every captured fighter is entitled to humane treatment, including shelter, clothing, food and medical attention. By definition, a POW is a member of an adversary state’s armed forces or part of an identifiable militia group that abides by the laws of war. Taliban soldiers would likely be entitled to POW status, but despite all fighters captured are entitled to POW treatment unless a competent trial determines them otherwise. Despite the historical understanding of the United States as a world leader and agreement to the conditions of the Geneva Convention, the accounts of life within Guantanamo Bay do not align with these expectations.

Published in The New Yorker, Guantanamo’s Darkest Secret goes through the life experience of Mohamedou Salahi, who spent over fourteen years repeatedly tortured in Guantanamo Bay despite his innocence. According to the American Red Cross, who were initially barred from visiting the prison, medical files were being used by interrogators to gain information on developing “individualized” interrogation plans. Salahi recalls 24- hour interrogations, being placed in stress positions for countless hours, and the intentional withholding of his sciatic- nerve pain medication. Men were force- fed during Ramadan, berated with threats of rape and groping by female interrogators, and forced to shave their heads and beards, all mechanisms to “reduce the detainee’s ego and establish control.” According to interrogation memos, Salahi was moved from alternatively hot and cold cells, blasted with strobe lights and music, and lived amongst a baby crib because he was sensitive to his lack of having children.  Salahi is quoted by the New Yorker as the poster child for Guantanamo Bay intelligence. Salahi described his abuse in military court in grave detail, but the moment he started to speak of the abuse, “the recording equipment began to malfunction” and the tapes are now distorted.

The use of torture at Gitmo was never in secret. In 2002, the CIA received an exemption to a directive requiring humane treatment of Taliban or al- Qaida detainees. In 2003, the CIA reported to the White House that they had water boarded two men 119 and 42 times, but the true numbers were 183 and 83 times. In 2004, the CIA told the Justice department they were not using nudity as a form of humiliation, which was proven untrue. In 2005, the CIA claimed the water they were using to douse prisoners was not cold, and that they halted sleep deprivation when men’s lower extremities began to swell, but internal CIA documents noted differently. Despite consistent dishonesty, the ‘enhanced interrogation techniques’ program was extended in May of 2005 by the United States Department of Justice. The use of torture at Gitmo has affected the amount of evidence that can be used at trial. Evidence obtained through torture is nearly never admissible in court. As of 2019, one finalized conviction has come from Guantanamo Bay.

The Obama Administration and Investigation

In January 2009 during his first week in office, President Barack Obama ended the “enhanced interrogation techniques” at Guantanamo Bay. He called for the closure of Guantanamo within the year, with 242 detainees remaining at Guantanamo, a long 7 years since the re-opening. Despite the call for action, 192 men remained in Gitmo January of 2010, and the prison continues to operate today. When President Obama announced he would be closing the prison, the intelligence committee shared an intention to take a look at the program that had included a secret network of prisons in Thailand, Romania and other countries. In November of 2010, the Justice department announced no criminal charges would be brought for the mysterious destruction of videotapes of detainee interrogations. In 2012, another investigation into the death of two detainees ended with no prosecution.

The Senate Intelligence Committee voted 9-6 to study the CIA’s detention and interrogation program. On December 9th of 2014, the Senate committee released the report. The report included findings that the CIA’s use of enhanced interrogation was not effective, that the justification for the interrogation was based on inaccurate claims of their effectiveness, and that the CIA actively avoided congressional oversight of the program. On December 17th, The Panetta Review was disclosed by Senator Mark Udall of Colorado. The review, an internal study done by Mr. Panetta, then Director of the CIA, provided a summary of all documents provided to the Senate Intelligence Committee.

The internal review was full of information that disputed the facts and conclusions of the Senate report and revealed the CIA had been reviewing documents before they provided the Senate with them. Despite finding that the CIA had rarely reprimanded personnel accountable for inappropriate activity and systemic management failures, the release of the Panetta Review was determined to not warrant a re-opening of the investigation. In 2017, the CIA, CIA inspector general and Director of Intelligence returned their copies of the report to the Senate. If these copies were to be destroyed, the report would likely never see the light of day and remains classified.

Despite Guantanamo prison delivering little to no convictions, the cost of funding the prison since its re-opening in 2002 is over $6,000,000,000. The legal costs of Gitmo total $60 million annually, despite the fact that there is a single conviction thus far. Currently, taxpayers pay more than $445,000,000 a year to hold the 41 men remaining in the prison. Funding includes charter planes on and off the island for attorneys, judges and journalists, and government devices that destroy classified information annually. The cost of running the prison does not included the cost of ‘classified spending’, which is presumably the presence of the CIA at Guantanamo. Staff members at Guantanamo have access to chapels, movies, housing, dining rooms, a full mental health care team and comfort dogs. Despite the amount of men in the prison having decreased, the cost of running the facility continues to only become more expensive.

Under Trump and the Future

While campaigning in 2016, now President Donald Trump promised to fill Guantanamo up with more ‘bad dudes’. In 2018, President Trump signed an executive order declaring Guantanamo Bay stay open, and directing the Pentagon to reexamine military detention. In May, he stated that Gitmo would be prepped to be used in the fight against ISIS and al- Qaida. In direct opposition with past statements, September of 2019 President Trump announced the United States would not be using Guantanamo as a place to put captured people ‘for the next 50 years spending billions and billions of dollars’.

Despite this, only one prisoner has been freed from custody since Donald Trump became President. While the Bush administration re-opened Guantanamo as a prison, the Obama Administration broke its promise to close the prison, and likely its promise to halt torture. The Trump Administration has made multiple promises in every direction, again leaving the American people and prisoners of Gitmo to wonder what will come of the prison and the men there. The question remains to be answered as to why the prison is still holding men today who were suspected of crimes committed nearly 20 years ago with no timeline or legitimate expectation of conviction.

The Romney heard ’round the world