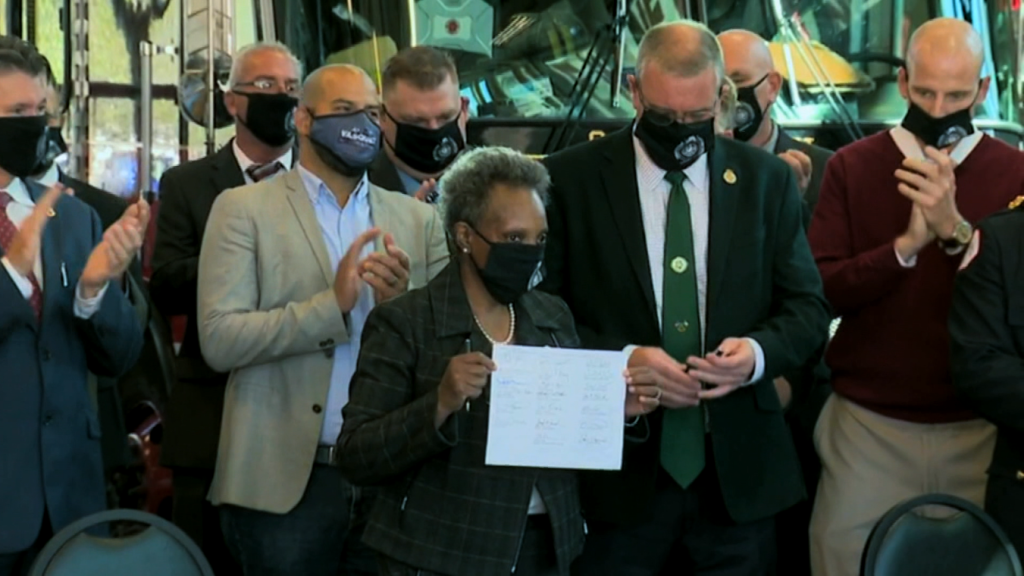 CHICAGO (CBS) — Mayor Lori Lightfoot and the union representing Chicago firefighters on Friday celebrated signing a four-year contract that will provide firefighters and paramedics with $95 million in back pay, but puts off tough negotiations on staffing issues until next year.

“Today’s signing ceremony will give these brave men and women access to the fair wages and benefits they deserve, while still being judicious with taxpayer dollars. That’s cutting a fair deal for first responders and our taxpayers,” Lightfoot said Friday morning.

The union had ratified the deal on a 76% vote, and the City Council approved the contract earlier this month.

Rank-and-file firefighters’ previous contract with the city expired in 2017, so the new deal lasts only through next June, and negotiations on the next contract will begin in March, according to the mayor and Chicago Firefighters Union Local 2 President Jim Tracy.

The new contract includes a 10% raise for firefighters and paramedics over the life of the contract, in exchange for those employees contributing more toward their health care plans.

“Thanks to their selflessness and expertise, our city is safer and better equipped to handle the growing needs of our residents,” Lightfoot said. “They serve us and we will stand by them with fair wages, benefits, and safety protections; and that is, of course, the way it should and must be. This contract will memorialize the concerns of our firefighters and ensure that they receive a second set of bunker gear for their safety and convenience.”

The deal also calls for the city to provide firefighters with a second set of bunker gear, and other guarantees on personal protective equipment.

Lightfoot said a second set of bunker gear was a frequent request she heard from firefighters while visiting firehouses.

“Because when men and women respond to a fire in the middle of the winter, and their clothes get contaminated, and they get wet, another fire could be happening where they’ve got to respond on the same shift. It’s important that we take the steps that are necessary, so that men and women in the Fire Department have the equipment that they need to keep them safe and healthy,” she said.

While the city is facing an $800 million budget shortfall this year, and a $1.2 billion shortfall next year, the city already had set aside money to pay for the $95 million in back pay for firefighters.

“Obviously, we anticipated what the amount would be, and we started setting aside resources to make sure that we could get the deal done, so it’s already accounted for,” she said.

Tracy made it clear tough negotiations still lie ahead for both sides.

It will be only a matter of months before the city and the union are back at the bargaining table on the next contract, when both sides will have to tackle the contentious matter of staffing requirements.

The new contract does not change staffing requirements, which mandate at least five people on each fire truck and fire engine, a rule that will stay in place until 2022. Tracy made it clear that keeping the five-person rule is something the union isn’t going to give up easily.

“It can’t be done by two or three people, it has to be by five persons, period. We cannot do our job without it. We endanger the lives of ourselves, and we endanger citizens,” Tracy said. “We need to maintain manning, and the mayor was true to her word, and she kept that up till 2022. So I’m very pleased with being able to deal with a person of integrity, and she is.”

Lightfoot said more work also needs to be done to increase diversity in the Fire Department.

“When I sit there on the graduation stage, I want to make sure that the graduates reflect the great diversity of the city, and we are committed to making sure that that happens,” she said.

The mayor said she wants to get the next firefighters’ contract done sooner rather than later, expressing frustration with the longstanding practice of only reaching a deal on new labor contracts years after previous deals have expired.

Meantime, the mayor confirmed her administration is considering eliminating some of the 847 vacant positions at the Chicago Police Department to help plug a massive budget hole for 2020 and 2021. Lightfoot declined to speculate how many of those vacancies might be eliminated.

Lightfoot also fired back at Chicago Fraternal Order of Police President John Catanzara, who earlier this week walked out on contract negotiations with the city, after the mayor’s office offered the same 10% raises that firefighters received, but also demanded a laundry list of changes to the department’s disciplinary processes.

According to published reports, Catanza said he plans to send the city a counter-offer that includes only financial matters, and will demand a yes or no vote from the City Council. He also reportedly threatened to back challengers to any aldermen who vote against the union’s offer.

Lightfoot said she does not “have a lot of good things to say” about Catanzara, with whom she has frequently butted heads, but insisted she “cares deeply about the men and women of the Chicago Police Department” and wants to get a deal done as soon as possible, insisting that concessions from the FOP on disciplinary matters is a must.

“It’s over 1,100 days since the police contract expired. We should get a deal done, and he should get at the table and be serious about getting the deal done, but a deal with the Chicago FOP has to include accountability and reform measures, and if he’s not serious about that, we’re going to quickly find ourselves at an impasse,” she said. “We want to be at the table, we want to get something done and move forward. Really, the ball is decidedly in the court of the FOP, but all this hue and cry in the media doesn’t get a deal done, and doesn’t serve the members well, most importantly.”