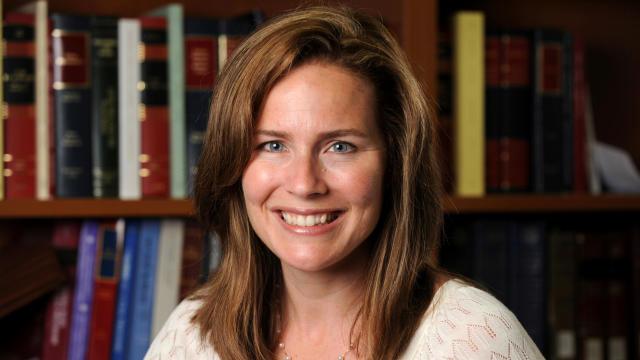 (CNN) — The Supreme Court has gone a decade without acting on a major case concerning the Second Amendment, an issue that could receive rare attention in the future by the high court should Judge Amy Coney Barrett be confirmed to the bench in the coming weeks.

The court has resisted taking up a significant Second Amendment case since the 2008 case District of Columbia v. Heller — which held that the Second Amendment protects an individual’s right to possess a firearm — and a 2010 follow-up, turning away 10 gun rights cases in the last term alone.

Barrett’s judicial record on the Second Amendment is thin, limited to just one dissenting opinion she wrote in 2019 as a judge on the 7th US Circuit Court of Appeals. But that lone dissent, ranging nearly 40 pages, speaks volumes about her originalist mindset — the legal philosophy championed by the late Justice Antonin Scalia — and her view that gun ownership is a fundamental right.

The appeals court, Barrett said at the time, “treats the Second Amendment as a second-class right.”

Should the Senate confirm Barrett, who once clerked for Scalia, she could provide the extra vote Justice Clarence Thomas has been advocating for to take up Second Amendment cases.

“We saw earlier this year that, even though four of the current justices are ready to take up a number of Second Amendment cases, they weren’t sure if they had a fifth vote on the merits — because they weren’t sure about the chief justice,” said Steve Vladeck, CNN Supreme Court analyst and professor at the University of Texas School of Law.

“It seems likely that the confirmation of Judge Barrett would remove that uncertainty and open the pipeline to a flurry of cases, perhaps ranging from the constitutionality of criminal felon-in-possession statutes to large-capacity magazine bans,” Vladeck added.

In the 2019 case on the 7th Circuit, the majority found that a federal and Wisconsin law barring convicted felons from possessing a firearm did not violate the Second Amendment.

Barrett did a deep-dive in her dissent into the origins of the Second Amendment and applied it to Scalia’s opinion in Heller, one of the most significant gun rights cases in modern history,

Barrett concluded in Kanter v. Barr that while the founders may have favored limiting gun rights for people posing a danger to society, a blanket ban on felons was not rooted in historical precedent or writings.

“History is consistent with common sense: it demonstrates that legislatures have the power to prohibit dangerous people from possessing guns,” she wrote, applying an originalist approach that looked to the 18th-century intentions. “But that power extends only to people who are dangerous. Founding legislatures did not strip felons of the right to bear arms simply because of their status as felons.”

Originalism was the hallmark of Scalia’s jurisprudence — it is the doctrine that demands justices decipher the original meanings of texts in order to determine whether someone’s rights are violated. To that end, the majority of Barrett’s 37-page dissent in Kanter is devoted to exploring the history of gun regulations for convicted criminals in the 1700s and 1800s.

Barrett repeatedly referenced the country’s founders and their intentions when ratifying the Second Amendment, saying they “would not have assumed that a free man, previously convicted, lived in a society without any rights and without the protection of the law.”

Those rights include the right to bear arms, and Barrett argued that it was a high bar for modern legislatures to restrict that right.

Barrett also invoked two current conservative justices in the final line of her dissent, warning that the Second Amendment was in danger of becoming a “second-class right.”

“Holding that the ban is constitutional … does not put the government through its paces, but instead treats the Second Amendment as a second-class right,” she wrote.

The line directly quoted from the plurality opinion Justice Samuel Alito authored in McDonald v. Chicago, a follow-up to Heller that affirmed an individual’s right to possess and carry weapons applied on the state and local level as well as federally.

While Barrett quoted Alito, it may have also been a nod to Thomas, one of the most conservative justices currently on the bench, who slammed the court for not taking up a gun rights case out of Illinois in 2015. Thomas turned the words of Alito into a criticism of the Court, stating, “I would grant certiorari to prevent the Seventh Circuit from relegating the Second Amendment to a second-class right.”

Already, Barrett has the backing of the National Rifle Association, the nation’s largest gun rights organization.

In a statement issued the same day Trump unveiled his nominee last month, the group said it “fully supports” Barrett and urged the Republican-controlled Senate to “act swiftly to confirm her.”

“Judge Barrett’s record demonstrates a steadfast commitment to the fundamental rights enshrined in our Constitution,” the group said. “With this nomination, President Trump continues his record of nominating qualified, fair-minded federal judges who respect the Bill of Rights – including the Second Amendment – to our nation’s highest court.”

The NRA had also supported the nomination of Trump’s two other Supreme Court appointees: Justices Neil Gorsuch and Brett Kavanaugh.

But while the conservative jurist received praise from supporters of gun rights, she also got harsh criticism from two major gun control groups, one of which warned that her confirmation could endanger Americans.

“Amy Coney Barrett’s alarming interpretation of the Second Amendment would make her an ideal Supreme Court Justice for the NRA, but a terrible one for the safety of the American people,” said Shannon Watts, the founder of Moms Demand Action.

“Giving her a lifetime appointment on the Supreme Court will make us all less safe,” Watts said.