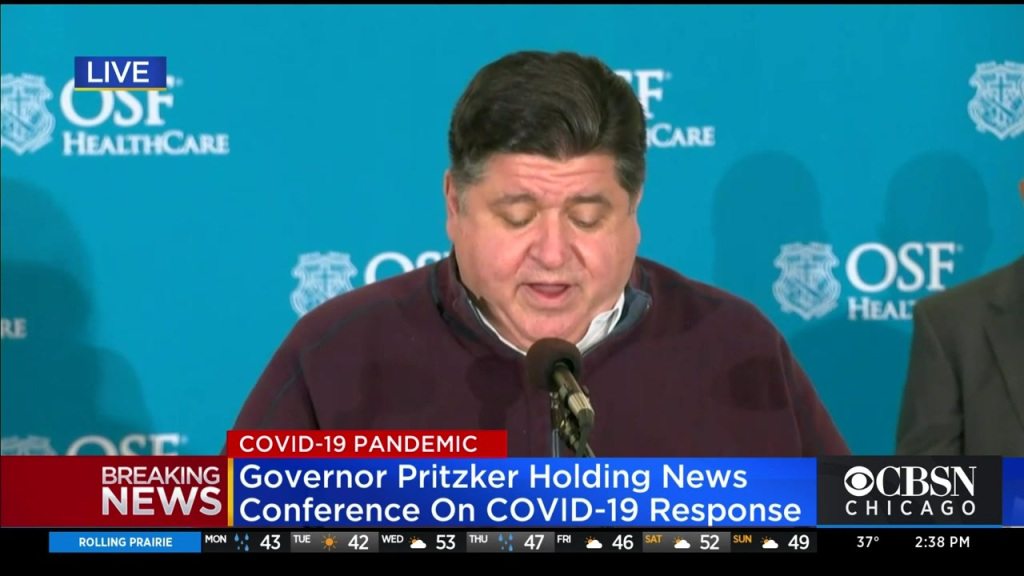 CHICAGO (CBS) — After Illinois continues to see high COVID-19 cases, including more than 6,000 cases on Saturday, a state record, the governor and the state’s  health director continue to plead for people to take the restrictions seriously. Or more hospitalizations and deaths will follow.

“This is not over. There seems to be a COVID storm on the rise. And we have to get prepared. In the last 24 hours with loss, another 17 people in the battle with COVID-19. Those are people whose families thought that they would get to see them at the Thanksgiving table. These are our friends and our family members now gone from our lives,” Governor JB Pritzker said.

The governor added “there are currently more than 2,500 Illinoisans in the hospital, fighting this virus, and unfortunately because we now have so many new people getting infected, that number will likely rise over the coming weeks. Many of those people will survive, but many will have lasting damage to their lungs and other internal organs. When we talk about the importance of wearing a mask and keeping your distance, it’s because we don’t want you to become one of those. Until we have a vaccine, or an effective treatment, let’s follow the rules to keep each other safe.”

The governor and the state’s health department are enforcing restrictions for Regions 4 and 10. That includes Metro East and Suburban Cook County starting at 12:01 am on Wednesday, October 28.

Region 4 experiences a 7-day rolling average test positivity rate of 8% or above for three consecutive days.

“Region 11, the city of Chicago is now seeing an average positivity rate of 7.7% And regions three and six are both at 7.8% and region nine Lake and McHenry counties is reporting its first day of an average positivity rate above the 8% threshold for mitigations at 8.1%. If the region remains above the 8% threshold for the next two days, it could enter a period of additional mitigations possibly later this week,” Pritzker said.

“We’re seeing a national surge of coronavirus and Illinois is not immune. Our neighboring states of Missouri, Iowa and Wisconsin, all have positivity rates hospitalizations that are in the double digits positivity rates anyway. And they’re soaring. So it’s perhaps not surprising that over the weekend, two more regions in Illinois region for Metro east, as well as region 10 suburban Cook County triggered our metrics for additional mitigations, meaning that starting Wednesday, six of our 11 restore Illinois regions will be operating under our resurgence framework.

Doctor Ngozi Ezike of the Illinois Department of Health once again rang the alarm to future coronavirus cases if people do not wear masks, practice social distancing and to adhere to mitigation efforts.

“If what we’re seeing today, does not turn around. We are on a path to see more than 11,000 covid deaths in Illinois this year,” Ezike said.

Last week, the head of the IDPH held back tears during her daily COVID-19 update, visibly upset by the news that COVID numbers continue to rise in Illinois.

“I just got overwhelmed. A combination of frustration and fear and some discouragement and the road that we’ve taken. Despite some opportunities and chances to do better, Ezike said. “I got an overwhelming amount of support from people from throughout the state and actually internationally, saying that they all feel that kind of frustration I felt. Maybe in retrospect, it was some kind of cathartic release, and hopefully after that now, we can, put our roots back on and continue the fight and fight against the fatigue and then fight against the virus as well.”

“You’ve heard me say this and everyone a million times, wash your hands, wash your distance and wear your mask. Just to be clear, it’s not pick two or three or pick your favorite one. It’s all of them. These measures are additive, and we need to do all of them to help spread the virus,” Ezike said.

The governor said that while the Illinois State Police cannot go to every place that is not following the mitigation mandate, the agency has the power to enforce the rules and consequences if not adhered to.

“Where we know we’ve got scofflaws, where we know there are bars and restaurants or others who are putting the public in danger, we have asked our state police to go into those areas. They have the ability, through the regulation that was passed just a couple of months ago, to issue first warning.” Prtizker said. “Then a dispersal order and then a citation if they have to go that far. Most businesses are compliant, when they hear that they need to be, but some aren’t.”

Pritzker said as of now, there are no plans to set up McCormick Place as a space for coronavirus patients as it did in the early days of the pandemic.

Resurgence Mitigations will go into effect on Wednesday for Regions 4 and 10. Learn more: https://t.co/8HAFBBrZY2 pic.twitter.com/4Gi85qsT5Z